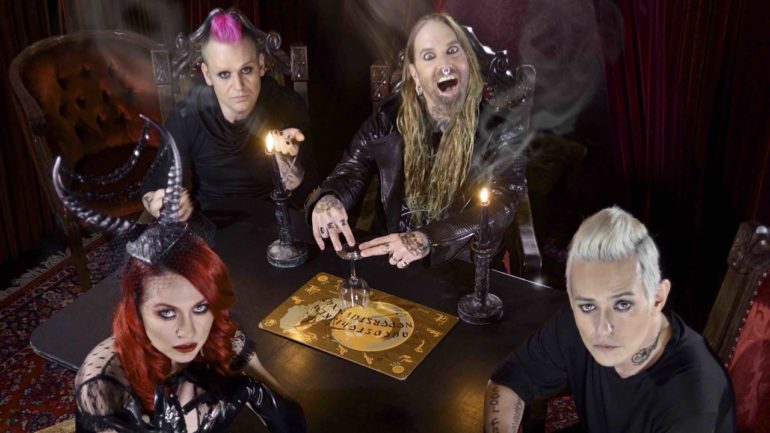 The legendary American nu-metal band Coal Chamber played in the Melkweg, Amsterdam at June 1, 2015. Before they climbed the stage, Anton played the ‘Dutch Heavy Music Quiz 2015‘ with drummer Mikey ‘Bug’ Cox and tour manager Eddie. Check if they were able to beat the score of 7 points from Obituary.

Anton: Hi guys, how are you doing?
Mikey: Yeah, really good. Yesterday we played a sold out show in London and that was one of my best shows ever. It really was amazing!
Anton: That’s nice to hear. Hopefully the show tonight is even getting better.
Mikey: We will give all we have! But let’s start with the interview.
Anton: Alright. It’s not just an interview. We gonna do a quiz. The Dutch heavy music quiz, to test your knowledge about the Dutch music scene.
Mikey: Well, then I need some help I think. Eddie! You have to join me with this one.
Eddie: Alright, let’s do this.
Anton: You get 3 points when you know the answer without hearing the 3 options and one point with the options. Let’s start!

Question 1: Which heavy guitar player was born in The Netherlands and moved to the USA in 1962 when he was 9 years old?
Mikey: A Dutch guitar player? And which kind of music was he playing?
Anton: Hardrock.
Mikey: Just hardrock? Dutch and now he’s American…
Anton: I can give you the options.
Eddie: Yeah, let’s do the options.
Mikey: But I think I know it without the opions… But give ‘m.
Anton: A. Rhandy Roads, B. Eddie van Halen, C. Slash
Mikey: wait, is it Slash?… On no, it’s Eddie van Halen.
Anton: One point for you!
Mikey: Woow! I want to say Slash. I just read the book. BOOM!

Question 3: In which American hardrock band was Dutch guitar player Adrian Vandenberg playing in the 80’s and 90’s?
Mikey: What the fuck. Go ahead.
Anton: A. Whitesnake, B. Deep Purple, C. Twisted Sister.
Mikey: It’s not Twisted Sister. Deep Purple? Eddie?
Eddie: It’s not Whitesnake. Then it’s Deep Purple.
Anton: Sure? It’s wrong. It’s Whitesnake.
Mikey: Oh, what the fuck!? You piece of shit!
Eddie: Can we hear the question again?
Mikey: No, fuck you,
Eddie: A Dutch guitar player named what?
Anton: Adrian Vandenberg
Eddie: And he was the original guitar player?
Anton: No, not the original. He joined in the 80’s.
Eddie: Oow, I though you said the original.. Nevermind
Anton: Next one!

Question 4: Which Dutch metal festival was in 1995 the largest metal festival in the world?
Mikey: I know it, but give me the options.
Anton: A. Waldrock B. Dynamo C….
Mikey: Dynamo, Dynamo!
Anton: That’s correct. Perfect! 3 points. Alright, number 5
Mikey: Woohoo!

Question 5: Which Dutch hardcore band toured around the world with Six Feet Under, Soulfly, Sick Of It All, Madball and Hatebreed?
Mikey: The options?
Anton: A. No Turning Back, B. Backfire, C. Born From Pain.
Mikey: Pfff… I have no fucking idea.
Anton: Haha, that’s not a good answer.
Mikey: Non of those are even sound Dutch… I go for Born From Pain.
Anton: Jaaa!
Mikey: That was a guess! 4 points!

Question 6: Who was the original female leadsinger from the legendary Dutch gothic metal band The Gathering?
Mikey: Oooooh! Shit, we played with them. I think we played with them in Germany. Eddie? We seen her recently. What are the names?
Anton: A. Anneke van Giesbergen, B. Simone Simons, C. Sharon den Adel.
Mikey: A.
Anton: That’s correct.
Mikey: Yeah! Hahahaaaa!
Anton: Number 7

Question 7: Which Dutch music project had Bruce Dickinson, James Labrie and Devin Townsend as vocal guests?
Mikey: Vocals guests? What are the options?
Anton: A. Star One, B. Ayreon, C. Stream Of Passion. It’s a Dutch music project from Arjen Lucassen
Mikey: I know all the people, but I just don’t know this project. I go for Stream Of Passion.
Anton: No, it was Ayreon.
Mikey: Ah, damn.

Question 8: Which large metal record label was founded in The Netherlands in 1980?
Mikey: Give me the answers?
Anton: Are you sure you want the answers? You have to know this one! A. Roadrunner B…
Mikey: Yeah! Roadrunner.
Anton: Haha. Yes, that’s correct. 6 points for you!

Question 9: Which Dutch female singer is since 2013 the new lead singer for Nightwish?
Mikey: Just give me the options.
Anton: A. Maria Brink, B. Floor Jansen, C. Caroline Westendorp.
Mikey: It’s not Maria. It’s the last one. C.
Anton: No, no. no. It was Floor Jansen. 6 points.
Mikey: Why aren’t you helping me Eddie! I have to through you into the water!
Anton: So you can get 7 or 9 points with the last question. And the best band receives the Award, so go for it. And there are a lot of bands coming.
Mikey: Alright!

Question 10: Which great death metal band from The Netherlands toured with Death through the USA in 1993?
Mikey: Name them…
Anton: A. Textures, B. Legion Of The Damned, C. Gorefest
Mikey: Ah, fuck. What’s the first one?
Anton: Textures.
Mikey: I go for B.
Anton: No, it’s Gorefest.

Anton: 6 points for you. So, you are now number 2, after Obituary.
Mikey: Damn. And you suck by the way Eddie. You toured with Faster Pussycat and even fucking Whitesnake!
Eddie: Yeah, I didn’t know that one…
Anton: Haha, serious? Damn. Well thanks for your time and enjoy your show tonight!
Mikey: Thanks man!

Coal Chamber: 6 points. Check all the other bands who played the ‘Dutch Heavy Music Quiz 2015‘.