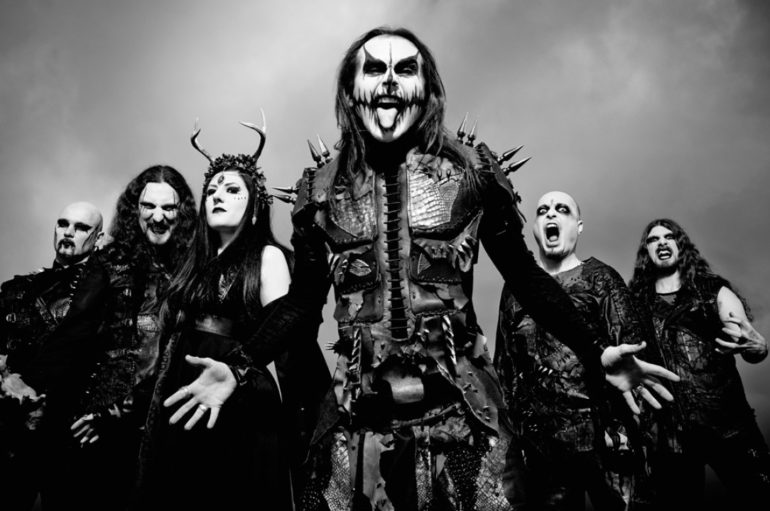 The extreme metal band Cradle Of Filth (UK) is the fourth band playing the “Dutch Heavy Music Quiz” at Graspop 2015. On a sunny sunday afternoon, it was up to Dani Filth (vocals) and Martin Skaroupka (drums) to test their knowledge about the Dutch heavy music scene. They had to beat Exodus, Cavalara Conspiracy, Obituary, Godsmack or Coal Chamber. And they did!

Anton: Welcome guys to the “Dutch Heavy Music Quiz”. Do you think you know a lot of the Dutch music scene?
Martin: One of my all time favorite bands is called The Orphanage. Pretty old Dutch band, but they already split up. A very good band.
Anton: Well, then I expect a lot of you guys. Let’s start!

1. Which hardrock guitar player was born in The Netherlands and moved to the USA in 1962 when he was 9 years old?
Dani: A Dutch guitar player?
Anton: Yes of course! I can give you the options, but then you loose 2 points if you know it.
Dani: No, no options…
Martin: Is it Eddie van Halen?
Anton: Yeah! Born in Nijmegen and his brother Alex in Amsterdam. Your first 3 points.

2. What is the most successful gothic metal band ever from The Netherlands?
Martin: Within Temptation.
Anton: Wow, this is going very well! 6 points!

3. In which famous American hardrock band was Dutch guitar player Adrian Vandenberg playing in the 80’s and 90’s?
Martin: Is it Whitesnake?
Anton: Yeah, that’s correct. This is going to fast! Haha… 9 points!
Dani: Woohoo!

4. Which Dutch metal festival was in 1995 the largest metal festival in the world?
Dani: Dynamo! Yeah, for sure! I remember the last one where the farmers put all the shit everywere, because they didn’t want the festival over there. So it stank terrible. I believe it was in 1999.
Anton: In 1999 was the last 3-day edition, with Metallica, Biohazard. I was there, but I can’t remember the shit story to be honest. Thanks for the background information. Haha… And 12 points for you!

5. Which Dutch hardcore band toured around the world with Six Feet Under, Soulfly, Sick Of It All, Madball and Hatebreed?
Martin: A Dutch hardcore band?
Anton: I have some options for you?
Martin: No, I think I know it, but I’m not sure. Is it Born From Pain?
Anton: Wow, you’re the first one who knows it without the options. Very cool! 15 points for you!
Dani: Yeah!

7. Which Dutch music project had Bruce Dickinson, James Labrie and Devin Townsend as guest vocals?
Martin: That’s Ayreon from Arjen Lucaassen!
Anton: How did you know that one?
Martin: I heard all is records, because my dad is a huge fan of him.
Anton: We are in a flow. Let’s continue!

8. Which large metal record label was founded in The Netherlands in 1980?
Dani: Roadrunner!
Anton: This is amazing! 23 points!

9. Which Dutch female singer is since 2013 the new lead singer for Nightwish?
Martin: Of course, that’s Floor Jansen.
Anton: Haha… Crazy! You guys are a walking encyclopedia! Haha…
Martin: Well. it’s not that hard…
Anton: Haha… Well there are some bands thinking slightly different about it. Haha… The last one. You can go for the maximum score!

10. Which death metal band from The Netherlands toured with Death through the USA in 1993?
Martin: Yeah, that’s Gorefest. I know Ed Warby very well.
Anton: Ah, the drummer of course! Well, 30 points! The maximum score!
Dani/Martin: Haha! Hey!
Dani: Do we now get a prize?
Anton: The winner receives an award at the end of the year.
Dani: We would like a luxury yacht. Haha….
Anton: Hahaha… We will see! Thanks for your time and I think we will meet again at the end of the year. Haha…

Cradle Of Filth: 30 points! Check all the other bands that played the ‘Dutch Heavy Music Quiz 2015‘.