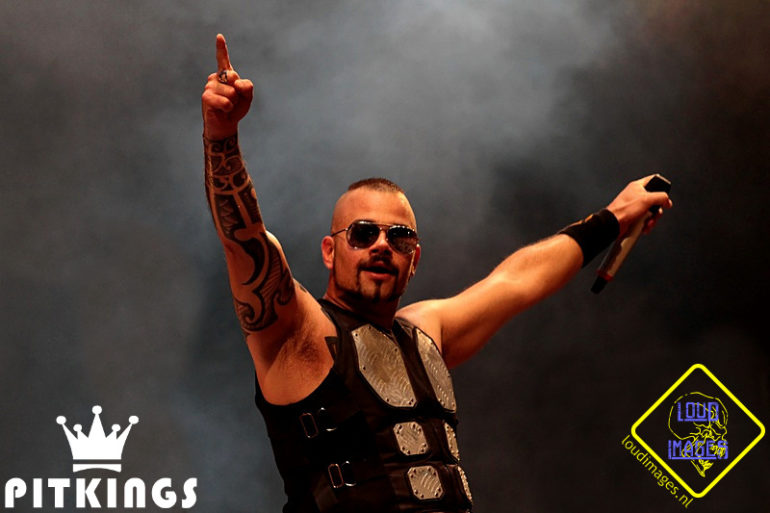 August 8, 2015 | Leeuwarden – When I arrived at Into The Grave 2015, in the city-centre of Leeuwarden, the sky opened up and I was greeted by a clear blue sky! Parking is superb at Into The Grave when you are early, like me. The nearest parking garage is right beneath the festival, so it takes less than 2 minutes of walking to the entrance. After talking to some friends and colleagues, I grabbed a cup of coffee and got my gear ready for the first band of the day. Cornered
As I walked to the front of the stage, I am positively surprised by the amount of people already there! It could have had something to do with the Frisian roots of this band, but it’s great for Cornered that there are (way) more people than just a handful. It’s always hard to be the opening act, but the weather and the already present crowd should make up for that. Near the end of the set there were hundreds of people in front of the stage, not bad! But there was little interaction. Maybe the distance between the stage and the crowd was too big for this kind of band, or the crowd was still a bit shy… Who will know, but this experience will surely help them to mature their stage presence. All in all Cornered sounded really well, but on a big stage with quite a crowd there must be more to make it also visually interesting. Audrey Horne
Audrey Horne is old school hard rock like Kiss or Van Halen. But when you take a look at the background of the bandmembers, you would expect something quite different! A friend of mine (hi Ronald) said to pay attention to the twinsolo’s of Audrey Horne and so I did… they are classic! Complete with the raised guitars! Audrey Horne didn’t create a moshpit (as far as I could see) and it isn’t real metal, but a large group of old metal heads enjoyed the hell out of this band! And quite some younger ones too, by the way! Avatar
The band I looked forward most, was Avatar. Johannes Eckerström and his band know how to put on a show and I wasn’t disappointed. At the start of their set all band members are lined up at the edge of the stage, except Johannes. A bellboy (in costume) hands them their guitars and when they start playing Johannes enters the stage, with quite a sense of drama. Meanwhile in Leeuwarden the temperature has risen even more and it became hot! Johannes’ make-up is having a hard time from his sweat. This gives him an even more creepy look, but he’s not slowing down. With big steps he strides around the stage and making faces at the crowd. Of course songs like ‘Hail the Apocalypse’ and ‘Bloody Angel’ are performed and they prove Johannes’ great voice (and big mouth… and large tongue!). Avatar was a feast for the eyes and ears! Ensiferum
The men of Ensiferum are quite something different, tough Viking metal brought with an attitude. Petri Lindroos totally qualifies as Viking; long blond hair, angry look and war paint. The music is fast and brutal and sounds good! The crowd grows and grows and is having a good time. This kind of metal is received well in Leeuwarden! I could write more, but Ensiferum is simply good, period! Obituary
Almost the synonym for death metal from the beginning of death metal is Obituary. These Americans eat, sleep and breath death metal and it shows! It’s loud, it’s brutal and despite there is hardly any show, its entertaining as hell! Obituary kicks ass and the crowd likes it and want’s more. There is an almost constant moshpit that proves the band has still a lot of followers. Nothing in their entire show gave away that they are all pushing 50! Cannibal Corpse
The next band is not really my cup of tea; Cannibal Corpse. The first thing to notice when the band enters the stage, are the enormous neck muscles of frontman George “Corpsegrinder” Fisher. Almost the entire set he is headbanging vigorously and because of the heat he is sweating immensely. In between ‘headbangs’ he is wiping the sweat from his forehead and eyes. It didn’t stop or slow him down in any way! Musically it’s a masterpiece, perfectly synchronized and very complex guitar work. But after 3 songs it’s all the same to me. A big part of the crowd is having a blast though, so Cannibal Corpse did a good job! Sepultura
The penultimate band is Sepultura. This Brazilian band always put on a great show and their tall, charismatic frontman with his deep, dark voice starts of merciless. The set is varied; some old songs and some new ones. The tour is in honour of their 30th Anniversary and with so much history there is a little something for everyone. Sepultura will always be a league of their own; powerful but some laughs too. For a few minutes Into The Grave turned in to the biggest dancehall in the Netherlands, when Sepultura started ‘Ratamahatta’. Keeps fascinating to see the disco-moves a lot of metalheads have! During this song you could feel the street underneath the festival move. Not much, but it moved, but we ain’t seen nothing yet! Way to soon the set ended and as always it was a great performance of Sepultura! Sabaton
The last band of the day was Sabaton. In the days leading up to Into The Grave, people online labelled Sabaton as ‘Eurovision Metal’, or even ‘Gay Metal’, so I was curious what to expect. Throughout the entire show the energy levels are high and the crowd in front of the stage (which was a lot younger at once!) was going insane! In the parking garage on my way home I hear they are doing an encore and the concrete above my head is making noises. When I’m in my car, even my car moves by the jumping people above!
The power metal of Sabaton was appreciated by a lot of metal heads in Leeuwarden. What bothered me were the semi-spontaneous ‘funny’ plays between songs. I think Sabaton doesn’t need them to put on a great show, but a lot of people thought they are funny, so who am I… The music is not what I would buy, but the show is fantastic and energetic!.

Overview
Into The Grave 2015 was a huge success! There was metal for everybody and the weather was perfect. With 7.000 sold tickets it was sold-out and that number was a bit above the optimum in my opinion. With Exodus contracted for next year I hope for the same conditions and the same people!

See you next year Into The Grave!