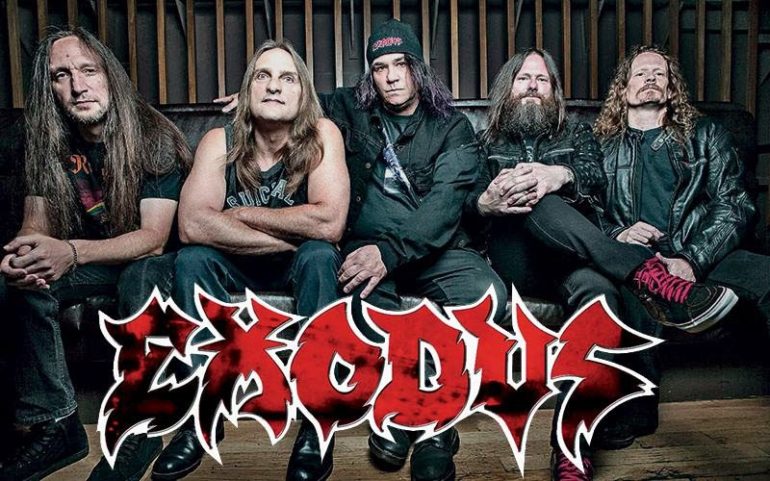 Yeah! Legendary Exodus is the third band playing the “Dutch Heavy Music Quiz” with Anton at Graspop 2015! On Saturday it was time for Jack Gibson (bass) and Tom Hunting (drums) to test their knowledge about the Dutch heavy music scene. Can they beat Cavalara Conspiracy, Obituary, Godsmack or Coal Chamber? It became a funny interview with a lot of laughing.

1. Which hardrock guitar player was born in The Netherlands and moved to the USA in 1962 when he was 9 years old?
Jack: He was born where?
Anton: The Netherlands.
Jack: Is that a town in Holland?
Tom: No Jack, the Netherlands are Holland. Hahaha…
Jack: Haha… I didn’t here you said The Netherlands.
Anton: So he moved to USA at age 9.
Tom: Rutger Hauer. Hahaha… Just give us the options.
Anton: Rhandy Roads, Eddie van Halen or Slash.
Jack: I take B.
Anton: That’s right. One point for your guys.

3. In which famous American hardrock band was Dutch guitar player Adrian Vandenberg playing in the 80’s and 90’s?
Jack: Adrian Vandenberg?
Tom: Whitesnake!
Anton: How did you now that one so fast?
Tom: I just like Whitesnake.
Anton: Good job! 5 points.

4. Which Dutch metal festival was in 1995 the largest metal festival in the world?
Tom: Dynamo Festival! We played Dynamo in 1988. It was quite large then, but it got bigger and bigger.
Jack: We also played there in 1997 and it was 85.000 people that day.
Tom: And in 1988 it was like 15.000 people and we headlined that edition. Awesome.
Anton: Cool! Also cool is that you reached 8 points!

5. Which Dutch hardcore band toured around the world with Six Feet Under, Soulfly, Sick Of It All, Madball and Hatebreed?
Jack: Pfff, no idea. Just gives us the options.
Anton: No Turning Back, Backfire or Born From Pain
Tom: Backfire sounds nice to me. B.
Anton: No, it was Born From Pain. Let’s go to the next question.

6. Who was the original female lead singer from the legendary Dutch gothic metal band The Gathering?
Anton: You know the Gathering?
Jack: No, options please. Haha…
Anton: Anneke van Giersbergen, Simone Simons or Sharon Den Adel.
Tom: I should say Sharon, because that sounds sexy. Haha…
Jack: Simone is the redhead girl, isn’t she?
Anton: Yeah, she played yesterday.
Jack: Then I go with her, because thats the only name I recognize.
Anton: That’s not OK. It’s Anneke van Giersbergen.
Jack: Aaaahhh… We fell for the two fishing lures…
Tom: Simone is not very sexy, Sharon is… Haha

7. Which Dutch music project had Bruce Dickinson, James Labrie and Devin Townsend as guest vocals?
Jack: I have no idea.
Tom: No, no idea…
Anton: I give you the options. Star one, Ayreon or Stream Of Passion.
Jack: I still can’t. No. I don’t know. I got nothing.
Tom: Also the other guys from the band wouldn’t know this one…
Jack: I take B.
Tom: I take C.
Anton: Which one? You play together. Haha…
Jack: Oow, are we playing together? I though we were playing against each other. Haha… Oke, go with me Tom. B.
Anton: Thats right! 9 points for you.
Jack: And we have audio evidence that I was right at that one. Haha…

9. Which Dutch female singer is since 2013 the new lead singer for Nightwish?
Jack: Ah fuck, I know here name. I will if you give me the options bro.
Anton: Maria Brink, Floor Jansen or Caroline Westendorp.
Tom: I think its B. Is it B?
Anton: Yeah perfect! 11 points!
Jack: We met her and she’s hot!
Tom: Yeah she’s hot. Hahaha…

10. Which death metal band from The Netherlands toured with Death through the USA in 1993?
Tom: 1993? Asphyx maybe. Asphyx is Dutch right?
Anton: Yeah, they are.
Jack: I take the options.
Anton: Textures, Legion Of The Damned or Gorefest.
Tom: I’m gonna go with C.
Anton: You know Gorefest?
Tom: No, but I know it’s not Legion Of The Damned, because they weren’t around back then. I’m just doing the process of elimination.
Anton: Igor Cavalera said Pestilence yesterday. You know Pestilence?
Tom: Igor is a fucking nerd! Hahaha…
Anton: Haha… Why?
Tom: Great drummer, but a total Dutch fucking metal nerd.
Anton: Hahaha… Yeah, he knew a lot.

Jack: So, what is our score?
Anton: Uh… 12 points for you!
Tom: Yeah! High five!
Anton: So you beat Obituary and Coal Chamber for now. And you beat Godsmack.
Tom: Yeah! In your face Godsmack! Haha…
Anton: So that’s the second place for now.
Jack: Second place Tom! We fucking did that shit. Haha…
Anton: Thanks for your attention guys!

Exodus: 12 points. Check all the other bands that played the ‘Dutch Heavy Music Quiz 2015‘.