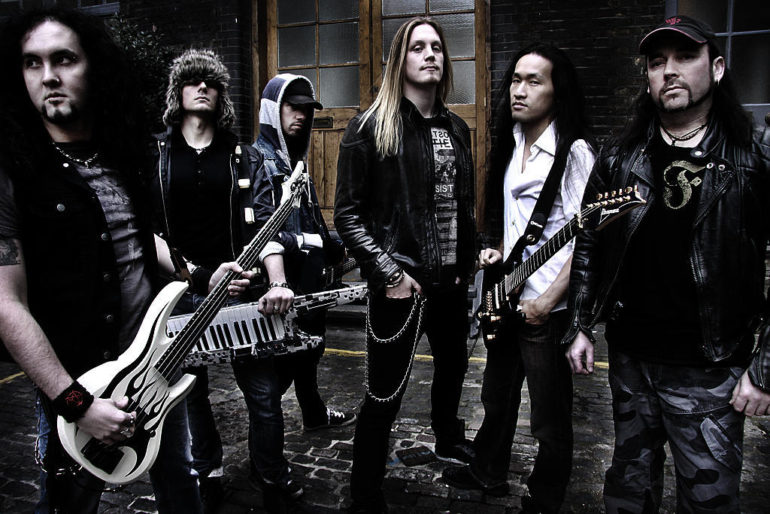 Alright! We have 3 bands left for you who are competing for the ‘Dutch Heavy Music Quiz Award 2015’. The British power metal band DragonForce is the eight band playing the ‘Dutch Heavy Music Quiz 2015‘. At Graspop Anton talked backstage with bass player Frédéric (Fred) Leclercq. Can this metalhead from France beat Exodus, Cavalara Conspiracy, Obituary, Godsmack, Coal Chamber and the monster score of Cradle Of Filth?

1. Which hardrock guitar player was born in The Netherlands and moved to the USA in 1962 when he was 9 years old?
Fred: Tsss.. Eddie van Halen of course
Anton: Of course that’s right. The first 3 points for you!
Fred: Haha… Very easy!

2. What is the most successful gothic metal band ever from The Netherlands?
Fred: Isn’t that Within Temptation?
Anton: You think?
Fred: Yes, or the Gathering. But I don’t think they were as big as Within Temptation is right now.
Anton: You’re damn right! 6 points for you. Very good!
Fred: You know, I always was, and still am, a big fan of ‘Orphanage’. This Dutch death/gothic metal band was for a long time my favorite band and that’s when I learned more about Dutch heavy music.
Anton: Aah, maybe that brings you to number one today? Haha…

3. In which famous American hardrock band was Dutch guitar player Adrian Vandenberg playing in the 80’s and 90’s?
Fred: Adrian Vandenberg? He was playing with Whitesnake.
Anton: Damn. 9 points already. You are going very well. How did you know this one?
Fred: My father was always a big metal fan and especially from bands like Whitesnake. So at home we listened a lot to this kind of music.
Anton: Aah, that makes sense. Up to question 4.

4. Which Dutch metal festival was in 1995 the largest metal festival in the world?
Fred: It’s not Graspop. Hahaha… It has to be Dynamo!
Anton: Of course! A enormous festival back in the days. 12 points for you.

5. Which Dutch hardcore band toured around the world with Six Feet Under, Soulfly, Sick Of It All, Madball and Hatebreed?
Fred: Hardcore band? Oow shit. Hold on…
Anton: I have some options for you?
Fred: Yeah, let’s do the options
Anton: No Turning Back, Backfire or Born From Pain.
Fred: Born From Pain? I have no idea…
Anton: Yeah, that’s right. 1 point for you.

7. Which Dutch music project had Bruce Dickinson, James Labrie and Devin Townsend as guest vocals?
Fred: Ayreon?
Anton: Damn! How did you know that one?
Fred: Well I was in that scene back then with my former band Heavenly. It was around 2001 and we were looking for great bands and then we discovered Ayreon. That’s how I know that.
Anton: Nice. Another 3 points for you! 19 in total now.

8. Which large metal record label was founded in The Netherlands in 1980?
Fred: Roadrunner.
Anton: Yeah, amazing! 22 and still counting! Haha…

9. Which Dutch female singer is since 2013 the new lead singer for Nightwish?
Fred: Ah, fuck, She used to be in After Forever. That’s Floor Jansen.
Anton: Wow! Amazing man. You are doing great.
Fred: Yeah, the only one I didn’t no was Born In Pain
Anton: Born From Pain… Haha…
Fred: Haha. Yeah, that one.

10. Which death metal band from The Netherlands toured with Death through the USA in 1993?
Fred: Pestilence.
Anton: Are you sure?
Fred: Well, in 1993 it almost have to be them.
Anton: What other death metal bands from The Netherlands do you know?
Fred: Well, Asphyx, Sinister…
Anton: I have some options for you?
Fred: No, wait. There is Gorefest as well. But no they aren’t the ones. Aahhhh…
Anton: Shall I give you the options?
Fred: Yeah, let’s go for it.
Anton: Textures, Legion Of The Damned or Gorefest
Fred: Gorefest then,. But I said Gorefest before. Hahaha… Can I have 2 points?
Anton: No, no. Just one point. I have to be strictly. Haha…

Anton: Alright! Let’s count. In total you have 26 points. A great score!
Fred: It went wrong with that Born From Pain. But yeah, I never heard of them… And I was doubting about Gorefest.
Anton: Well, no problem. For a guy alone you did an amazing job! You are number two right now.
Fred: No, it’s indeed a very good score then.
Anton: At what time are you playing today?
Fred: 21:15 at the Metaldome. We are headlining that.
Anton: Nice. Good luck with that and enjoy you time at Graspop.
Fred: Thank you very much!

DragonForce: 26 points. Check all the other bands that played the ‘Dutch Heavy Music Quiz 2015‘.