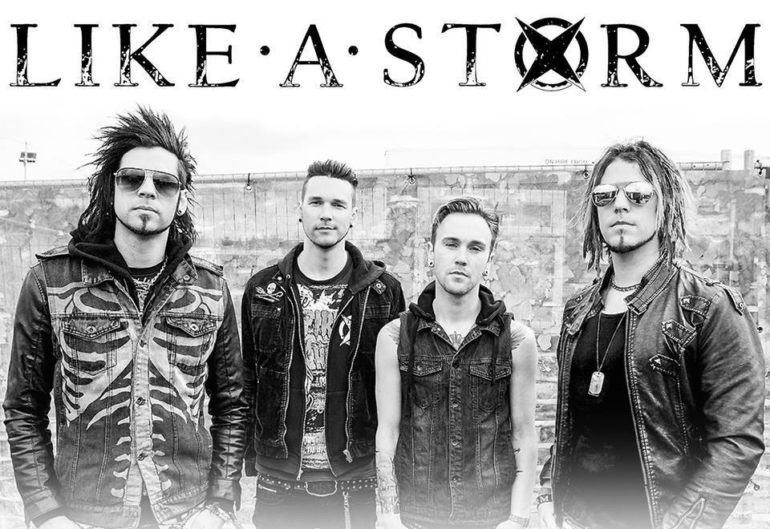 The second last band playing the Dutch Heavy Music Quiz 2015 is the hardrock/metal band ‘Like a Storm’ from New Zealand. In the backstage tent at Graspop 2015, Anton asked 10 question about Dutch heavy music to the three young brothers Brooks (Chris, Matt & Kent) and drummer Zach Wood. These friendly guys had to beat Exodus, Cavalara Conspiracy, Obituary, Godsmack, Coal Chamber, Dragonforce, Aborted and the monster score of Cradle Of Filth.

1. Which hardrock guitar player was born in The Netherlands and moved to the USA in 1962 when he was 9 years old?
Like A Storm: Haha… We need the options!
Anton: Haha. Sure? Alright. Randy Rhoads, Eddie van Halen or Slash.
Like A Storm: Ah, that’s Eddie van Halen
Anton: That’s perfect!
Like A Storm: Yeah, 3 points?
Anton: No no, 1 point! Haha… Next question.

3. In which famous American hardrock band was Dutch guitar player Adrian Vandenberg playing in the 80’s and 90’s?
Like A Storm: Can we have the options?
Anton: Alright. Whitesnake, Deep Purple or Twisted Sister.
Like A Storm: Is that Whitesnake?
Anton: Yeah, that’s correct.

5. Which Dutch hardcore band toured around the world with Six Feet Under, Soulfly, Sick Of It All, Madball and Hatebreed?
Like A Storm: Wow! We gonna need the options. Haha…
Anton: Haha… You are not into hardcore music?
Like A Storm: Well, we can ask you some questions about New Zealand hardcore? Haha… Let’s turn the table. Haha…
Anton: Bring it on!
Like A Storm: Which New Zealand hardcore/metal band is named after the marijuana plant?
Anton: Haha… I have really now idea. Cannabis?
Like A Storm: Haha… No, it’s 8 Foot Sativa.
Anton: Never heard of them… Haha… Let’s continue with options about the hardcore band. No Turning Back, Backfire or Born From Pain.
Like A Storm: We like the name of the last one. Haha… Let’s go for Born From Pain.
Anton: That’s correct! Lucky you! 5 points now!

6. Who was the original female lead singer from the legendary Dutch gothic metal band The Gathering?
Anton: You know the Gathering?
Like A Storm: Uh, no… I heard that they are legendary and Dutch. Haha…
Anton: Haha… Well, let’s give you the options then. Anneke van Giersbergen, Simone Simons or Sharon Den Adel.
Like A Storm: Wow, can you spell the names for us? Haha…
Anton: A-N-N-E-K-E V-A-N… Well, it are all long names. Haha…
Like A Storm: Haha… Let’s go for Anneke then. She sounds legendary. Haha…
Anton: Haha… Yes, she is, because she is the one I was looking for! Another point for you!

7. Which Dutch music project had Bruce Dickinson, James Labrie and Devin Townsend as guest vocals?
Like A Storm: Ooow… Give us the options.
Anton: Star One, Ayreon or Stream Of Passion
Like A Storm: Number one sounds like a comfortable name. Let’s go for that.
Anton: No, that’s not the one. It was Ayreon. It’s from Arjen Lucassen. He is a Dutch guitar player, producer, composer and more.
Like A Storm: Hell of a name. Haha… Who was the Dutch guy that discovered New Zealand? Haha…
Anton: Haha… That’s Abel… Uh… Abel…
Like A Storm: You wanna have some options?
Anton: Tasman!
Like A Storm: Yeah! 3 points for you! Haha…

8. Which large metal record label was founded in The Netherlands in 1980?
Like A Storm: Ah, we have to know this one… But gives us the options.
Anton: Roadrunner, Nuclear Blast or Metal Blade Records.
Like A Storm: Ah, that’s Roadrunner.
Anton: That’s a good answer! 7 points for you now.

9. Which Dutch female singer is since 2013 the new lead singer for Nightwish?
Like A Storm: Pffff… Let’s go for the options.
Anton: Maria Brink, Floor Jansen or Caroline Westendorp. Typical Dutch names. Haha…
Like A Storm: Let’s go for options 3.
Anton: No, that’s not correct. It was Floor Jansen. She moved from After Forever to Nightwish. Nice upgrade. Haha… Last question for you guys!

10. Which death metal band from The Netherlands toured with Death through the USA in 1993?
Like A Storm: Haha… Wow! We need the options again…
Anton: Textures, Legion Of The Damned or Gorefest.
Like A Storm: Gorefest? Yes, let’s go for that one.
Anton: Cool! Good guess. A total amount of 8 points. Not the best, but well done. At least more then Obituary and Coal Chamber… Haha…
Like A Storm: Yeah! Haha…

Like A Storm: And there was a band that knew al the answers?
Anton: Yes. This morning. Cradle Of Filth. Without hearing any options!
Like A Storm: Wow! Where are they from?
Anton: England. So I was blown away by them. Amazing.
Like A Storm: But the used Wikipedia? Haha…
Anton: Haha… You should say so, but no. What are you plans for the rest of the day?
Like A Storm: Just chill, have some dinner, drink some beers. This was our last show, so tomorrow we are flying home. And in October we start an US tour.
Anton: Nice to hear that it’s going very well with you. And playing the main-stage at Graspop is also awesome.
Like A Storm: Yeah, that was crazy. Our first show in Belgium, straight away at the main-stage of Graspop. Very cool!
Anton: Well, thanks for your time and have a save trip home!
Like A Storm: Thank you. And when we see you again we do a quiz about New Zealand. Haha…
Anton: Haha… Let’s do that!

Like A Storm: 8 points. Check all the other bands that played the ‘Dutch Heavy Music Quiz 2015‘.