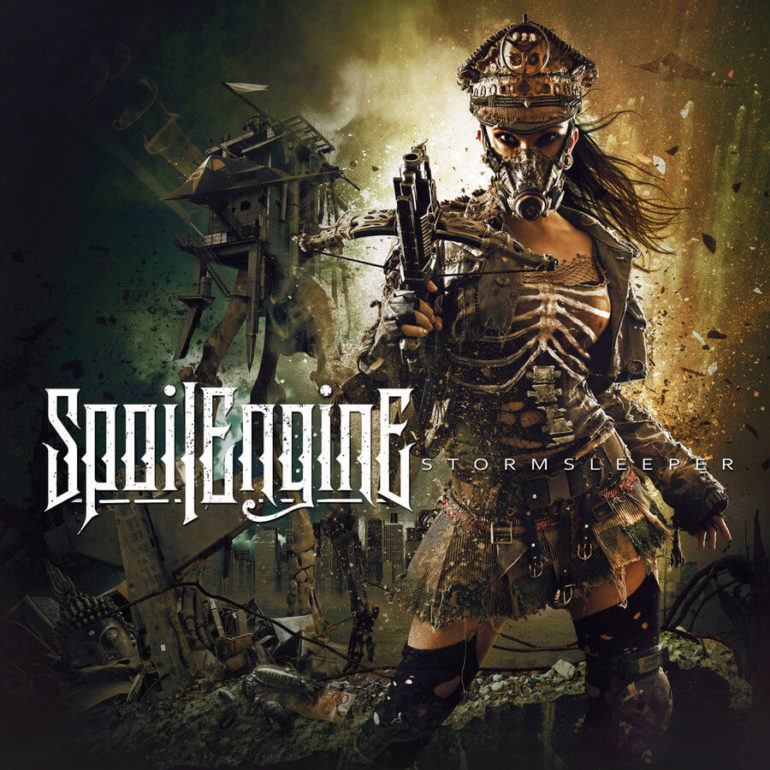 The Dutch/Belgian female fronted modern metal(core) band Spoil Engine is around since 2004 and in 2014 the female singer Iris Goessens replaced Niek Tournois as the new vocalist of the band. Last week, on May 5th, Spoil Engine released their 4th album called ‘Stormsleeper’, the first one with Iris on vocals. In my concert review that I wrote about Spoil Engine at Sugarfactory a few weeks ago, I told you that it was “a nice balanced combination of complex rhythms, aggressive riffs and delicious melodic slow parts. An excellent live performance!” Let’s hope they also kill us with their brand new album.

Is it modern metal, is it metalcore, is it death metal? Well actually I don’t care because it’s just awesome! Right from the start the heavy riffs, pounding drums and extreme brutal (female) grunting are filling my room. Despite the heaviness, it’s also very accessible metal music. The sound is not to much over produced like a lot of other modern metal bands try to do. It has some nice old school metal elements in it, especially the pure sounding guitar solos. A nice variety of slow, fast, pumping and melodic songs is coming my way. The vocals of Iris are great, because of the different styles she brings: clean, grunting, emotional and straight in your face.

I would like to pick a few songs that attracted my attention. First of all the song ‘Silence Will Fall’. This fast and pumping metal song is kicking your ass, but the clean bridge in the end makes it even better. Nice melodic guitars, clean vocals and a great twin guitar solo in the end. The highlight on this album are ‘Doomed To Die’ and ‘Stormsleeper’, because of the pumping riffs, the alternation of clean and grunting vocals and of course the catchy chorus in both songs. By the way, I thought Kerry King owned the trademark for howling guitar solos, but probably the guitar players Steven and Bart bought it from him. Damn delicious! Especially in the end of the song ‘Stormsleeper’, one of those guys is kicking ass with his guitar! The last song I would like to mention is ‘Singing The Sirens’: a slow metal ballad, packed with emotions in the beginning and brutal heaviness in the end. A well balanced variety of different songs, giving the album body and shape.

After the last song ‘Wasteland’, I’m also wasted…! Not only because of the humongous wall of sound, but also because of all things that happen along the way. For me a positive thing and it proves that this album isn’t boring at all, but entertains you with variety and makes you listen to it again and again. Big compliments and a big step forwards!