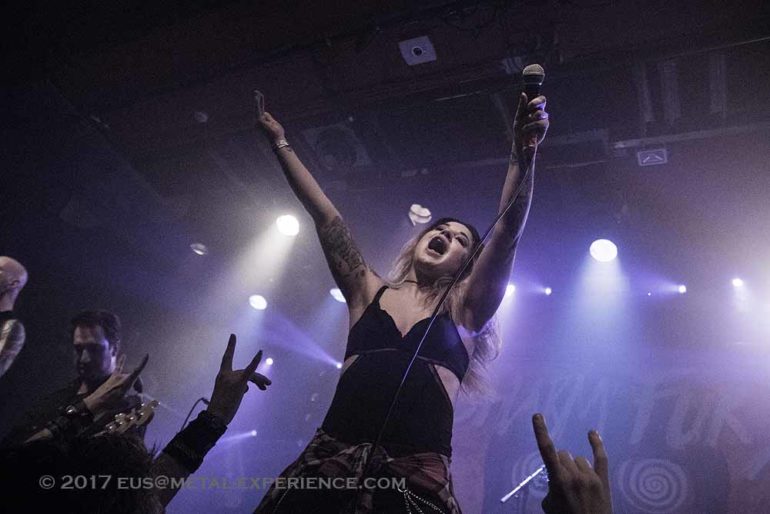 March 24, 2017 | Sugarfactory, Amsterdam – A brand new album, a contract signed at Nuclear Blast and gigs coming up at Graspop, Pinkpop and many more. It’s clear that the female fronted metal band The Charm The Fury is going fast. Before they hit the road, it’s time to celebrate the release of their brand new album called ‘The Sick, Dumb & Happy‘. Together with For I Am King, Spoil Engine and a lot of friends & family, the Sugarfactory in their hometown Amsterdam is the place to party. Pictures made by Eus Straver.

For I Am King
It’s 7 o’clock and the venue is already packed. The first band kicking ass is For I Am King. This Dutch female fronted metal band is also going fast in Europe. They have the honour to open this evening and they starts very heavy after a piano intro. During the first two songs, the sound is a bit to much bass which it makes it a bit messy. Melodies are hard to find, but after a few songs it getting better and the talent of the band shows his/her face. It’s hard, energetic, tight and it looks like their technical songs seem to be written for this small venue. Its right in your face! The audience is having a good time and I can come up with the conclusion that this is just an awesome and sympathetic band to watch. A good start! Spoil Engine
Next band is the Belgian/Dutch female fronted modern metal band Spoil Engine. This band is around since 2004 and can be seen as the Belgian precursor of The Charm The Fury. The sound of the band is perfect right from the beginning. This band is really keeping an eye on what’s happening in the audience. Not only the front woman is playing with the audience, but also all the other members. They get it together to let the audience build a circle pit in such a small venue. Really impressive! All the theatrical stuff they come up with let you almost forget how good and intense their metal music is. A nice balanced combination of complex rhythms, aggressive riffs and delicious melodic slow parts. An adult metal band which, like I said, can be compared with the headliner of this evening. The Charm The Fury
Around 9.30 it’s time for the headliner. Right from the start it’s clear where they came for: kill the place! All the eyes are 100% focussed on this band and besides the fact there’s pressure, they look very relaxed and are ready to throw a party! When it come to music, this band just kicks ass. What an energy and power! The sound is just perfect, the songs are complex and packed with variety and the clean vocals in the new songs are a delight in comparison with their older stuff. They take us with them on a tour that goes from extremely heavy to very slow and melodic songs. Especially the song ‘Echoes’ is for me one of the highlights of the evening, with everybody singing along. My conclusion? The expectaions were high, but they killed the place and they threw a party like hell. Everybody enjoyed and witnessed what this band is up to. Something to be proud of!