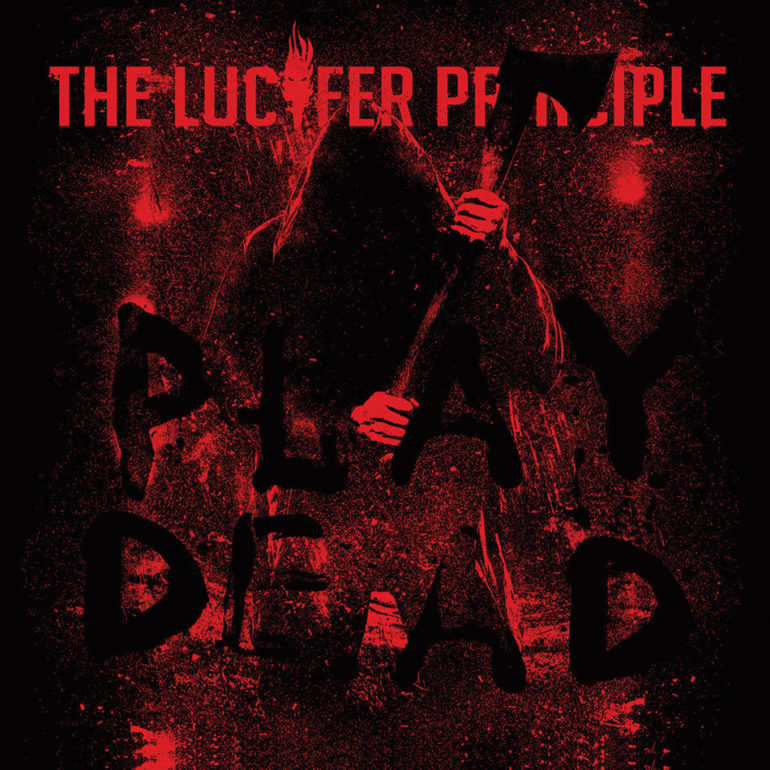 It is been a while since the Dutch death metal band The Lucifer Principle released their last album ‘Welcome to Bloodshed’ (2009). When asked during one of last years gigs, front man Erik acknowledged that there were advanced plans for a new album. The new songs played during those gigs weren’t just old unpublished material, but were the stepping stone of the new album. The Lucifer Principle’s third full length album is called ‘Play Dead’ and is announced for quite some time now, but will finally arrive on March 30th, 2017!

The album ‘Play Dead’ consists of 9 tracks and has some great artwork, which makes me curious about the merch that will be derived from this. The album kicks off with the title track ‘Play Dead’. It starts out quite mellow, but just wait ‘till the drums kick in… The speed of the first track, sets the pace for the rest of the album; it is pumping, groovy and catchy like hell! It’s that kind of song that sticks in your head for days. The break in the middle makes it even more brutal than it already was. The second track on this album is ‘Darker’ and it starts right there where ‘Play Dead’ ended, but has more tempo changes. ‘Darker’ has a nice build up towards an aggressive end. ‘Monsters’ is the next track and has a bit of different beginning. To say it is more melodic is compromising the rest of this album, but it is in a certain way. Maybe there is a tiny bit of a ‘Killing Cult Society’ (front man Erik’s other band) influence crept in, which sounds great. It sounds almost like a happy song on a death metal album!

With ‘Razor’ we go slow and heavy almost like doom metal, but with The Lucifer Principle you know it doesn’t take long to get it grooving en stomping again. This song takes it time to build up to just that. I greatly contributes to the heaviness of this track. ‘Eaten by the Wolfes’ is next and is around since 2012. It’s a straightforward death metal track in The Lucifer Principle-style. The well defined guitars and the ever stomping drums making this track quite enjoyable. I have to give it to The Lucifer Principle, their intros are varied and not always what you expect. ‘The Loss’ has an intro which could make you wonder, but the ever present drums tell you there is something brewing. After about 30 seconds mayhem is released and this might be one of the better songs of the album. ‘The Loss’ is very catchy, fast and has a very good build up to the end. Surprisingly the end of the song is a fade-out and that is a bit of a shame for such a good track.

With ‘Dei gratia’ The Lucifer Principle takes a slight different direction. Halfway the track there is a very enjoyable break with spoken text and an acoustic guitar. This songs is a bit slower and heavier at times than the other tracks. It has some great riffs and tempo changes which sound best with the volume way up, but that goes for the whole album. The one but last track is titled ‘Of Many Tongues’ and this one doesn’t leave room for any misunderstanding of the intent of The Lucifer Principle with this song. No fancy intro, but an icy scream of front man Erik and the relentless hammering of the drums. From start to finish, this song is merciless! Damn! What an aggressive and psyched song this is! I love it! I just can’t wait to lower the roof of my car and blast this out loud from my car stereo while driving on an empty freeway!
The ninth and last song is called ‘Nail the Coffin Shut’ and with that we return to the grooving and stomping sound which is typical for The Lucifer Principle. The title is well chosen for the last song of this album I think and is a worthy closing track. Maybe it is a tad bit more melodic than the other songs on this album, but it is still very recognizable. Conclusion
What a revival of The Lucifer Principle this is! It’s wild, it’s pumping, it’s stomping and groovy as hell! When you close your eyes, you can almost see the wild moshpit in front of the stage and The Lucifer Principle on stage encouraging the wild bunch to get even wilder. This album is close on how the songs are played live and that is a strong point of this band. No fancy additions which are hard to perform live, but straight up groovy death metal. A great album of The Lucifer Principle!