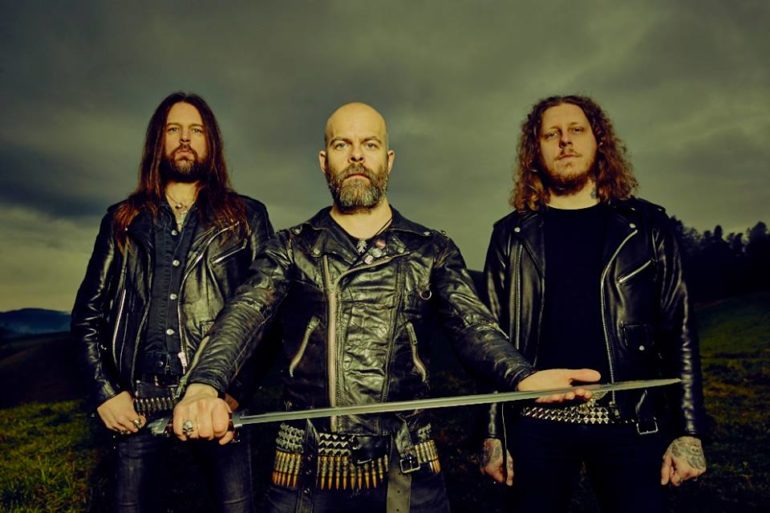 Last week we started with Soilwork, playing the first round of the Dutch Heavy Music Quiz 2016. They scored an amazing 23 points out of 30! The second band playing the quiz is the heavy metal band Grand Magus from Stockholm, Sweden. At Graspop I talked with Ludwig “Ludde” Witt (drums) and asked him the 10 questions about Dutch heavy music.

1. Which Dutch magazine for metal music was founded in 1980 by Metal Mike and Stefan Rooyackers?
Ludwig: Wow. I think we need the options here man.
Anton: Metal Hammer, Aardschok or Rockhard.
Ludwig: That’s the middel one!
Anton: That’s right. First point for you.

2. Which Dutch symphonic metal band is founded by Mark Jansen and got their name from Kamelot’s sixth album, released in 2003?
Ludwig: I’m sure I know it, but can I get some options here as well? Haha…
Anton: Epica, Autumn or Nemesea.
Ludwig: I would say C
Anton: No it’s Epica.
Ludwig: Ah, I know the band, but I didn’t knew they are from The Netherlands…

3. In 1990 Iron Maiden covered the song ‘Kill Me Ce Soir’. From which famous Dutch rock band is this song originally.
Ludwig: I’m gonna take a guess. Is it Golden Earring?
Anton: Yes! That’s fabulous! Haha… Steve Harris is actually a big Golden Earring fan, so the song was on the B side of the Holy Smoke single in 1990.

4. What have the Dutch death metal bands Asphyx, Pestilence and Hail of Bullets in common?
Ludwig: I have really no idea… Haha…
Anton: Let me help you. The same drummer, the same vocalist or the same guitar player.
Ludwig: I would say they have the same drummer
Anton: No
Ludwig: The same guitar player? Or the same vocalist? Haha…
Anton: It was the vocalist Martin van Drunen who played in all those bands. Still 4 points for you!

6. Which Dutch DJ, composer and musician worked together with Sepultura, Fear Factory and Dog Eat Dog?
Ludwig: I don’t know any DJ’s. Haha…
Anton: Me neither, except this one. Haha. I have Hardwell, Rude Boy or Junkie XL for you.
Ludwig: I would say the first one.
Anton: No, it was Junkie XL. He made also a remix of ‘A Liitle Less Conversation’ from Elvis Presley, which became a worldwide number one hit. Now he’s mainly composing music for movies like Spiderman, Mad Max and Batman.
Ludwig: Interesting. I know that song, so nice to hear this story.

7. A very popular metal band from The Netherlands is Carach Angren. What type of metal do they play?
Ludwig: What’s the name of the band again?
Anton: Carach Angren.
Ludwig: Death metal?
Anton: Is that your final answer? Haha… Because I have some options.
Ludwig: O yeah, give me the options
Anton: Groove metal, black metal or thrash metal
Ludwig: Thrash!
Anton: No
Ludwig: Groove
Anton: No
Ludwig: Black? Haha…
Anton: Yes! It’s black metal. Or like they say: black horror metal. But no points for you!

8. Which Dutch punk band played over 1500 shows and still holds the record of best sold Dutch punk album?
Ludwig: I can’t think of any Dutch punk vband at all actually. I’m not a big punk guy. Haha…
Anton: I give you the options. De Heideroosjes, The Ex or The Apers. You ever heard of one of those?
Ludwig: No. Haha… I say the last one.
Anton: No, it was The Heideroosjes. Still 4 points for you.

9. Floor Jansen is since 2012 the lead singer of Nightwish. In which Dutch symphonic metal band was she singing between 1997 and 2009?
Ludwig: I knew Nightwish had a new singer, but I didn’t know it was her.
Anton: Yes, since 2012. So in which band was she before?
Ludwig: I think I need the options
Anton: Within Temptation, Delain or After Forever
Ludwig: I would say Within Temptation
Anton: Are you sure?
Ludwig: Haha… No. I’m just guessing.
Anton: Haha… It was After Forever. Since 1997 she played with this band. Still 4 points… Up to the last question.

10. Which Dutch hardrock band scored a worldwide hit in 1982 with the song ‘Burning Heart’?
Ludwig: Burning Heart. I know that one. Are they Dutch?
Anton: Yes, they are.
Ludwig: Is it Survivor?
Anton: Is that you final answer?
Ludwig: Haha… No, Survivor is not Dutch.
Anton: Let me help you a little bit. The guitar player and founder also played with Whitesnake for about 10 years.
Ludwig: Was it Vandenberg?
Anton: Exactly! Well, 3 extra points for you, so a total of 7 points. Not that good unfortunately. Haha…
Ludwig: Haha… It’s better than nothing!
Anton: So, what’s up next?
Ludwig: Enjoy the festival for today and then we drive to Hellfest.
Anton: Nice. A lot of bands are going to Hellfest.
Ludwig: It’s also a nice festival. Just like Graspop. Good organization, long change overs, nice atmosphere and things. We played at Download and that’s the opposite of this. The organizers are no metal fans. You can feel it. It’s to commercial in a certain way. They want as many names on the poster as possible. So, Graspop is one of the better festivals to play as a band.
Anton: Well, nice to hear. I think your completely right! Thanks for your time and enjoy!

Grand Magus: 7 points. Check all the other bands that played the Dutch Heavy Music Quiz 2016.