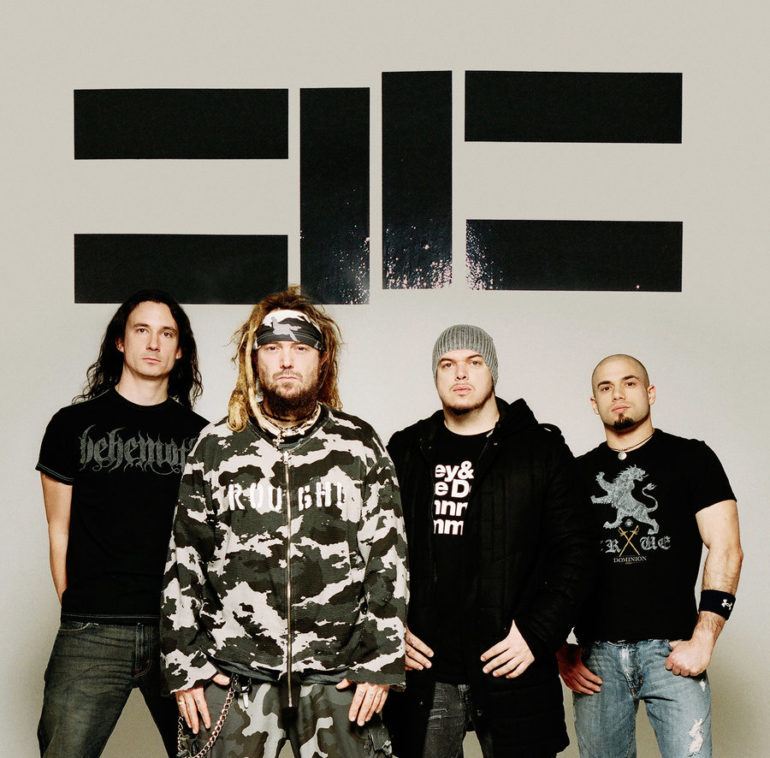 The first band that’s playing the “Dutch Heavy Music Quiz” at Graspop 2015, is Cavalera Conspiracy. Drummer Igor Cavalera is representing the whole band, because he thinks he knows most about Dutch heavy music. Can he beat Obituary or Coal Chamber on his own? Let’s find out.

Anton: Hi, Igor. Welcome and thanks for your time. Before we start the quiz, I have an urgent question. I just saw your show. Why are you hitting that drums so extremely hard? Haha…
Igor: Well, I have a picture of the Brazilian president on my drumpads and I wanna kill her. And I have large drumsticks like baseball bats.
Anton: And you have your tom-toms so flat. Why is that?
Igor: Yeah, that’s better. You need more power and make a better move to hit the tom-toms. So I play like a monkey. Haha… I have drumsticks in my feet, not in my hands. Just like Donkey Kong. I also through barrels. Haha…
Anton: Haha… Are you ready for the first question?
Igor: Yeah, let’s do it.

1. Which hardrock guitar player was born in The Netherlands and moved to the USA in 1962 when he was 9 years old?
Igor: Eddie van Halen?
Anton: Damn! 3 points for you!
Igor: That was an easy one. Come on.
Anton: Well, Obituary and Coal Chamber said Slash. So, it’s not that easy.
Igor: Slash? Haha… Van Halen is a pure Dutch name man.

2. What is the most successful gothic metal band ever from The Netherlands?
Igor: Oow man, I’m in trouble here. I don’t know.
Anton: I have some options for you?
Igor: Yeah, I loose some points. But seriously, I wouldn’t know this one.
Anton: Evanescence, Lacuna Coil or Within Temptation.
Igor: Haha… I still don’t know. I know the bands, but I don’t know which one is Dutch.
Anton: Well, just choose one.
Igor: The third one. Within Temptation? Just a pure guess.
Anton: Damn, your right! 1 point extra makes 4 points.

3. In which famous American hardrock band was Dutch guitar player Adrian Vandenberg playing in the 80’s and 90’s?
Igor: His name is Vandenberg? From an American hardrock band?
Anton: Yeah, very large band in the 80’s.
Igor: And Vandenberg is not the name of the band? Because I can remember that band.
Anton: Yeah, he had his own band Vandenberg, but before that, he was playing in this American band.
Igor: Whitesnake?
Anton: Are you serious? Because that’s right! How did you know that one?
Igor: I kind of knew it. It took me some time to go back on my hard drive. Haha…
Anton: Alright! 7 points. So you’re know at the same level as Obituary with 7 questions left.

4. Which Dutch metal festival was in 1995 the largest metal festival in the world?
Igor: That’s an easy one. Dynamo. We played there with Sepultura and with Nailbomb. I can also remember the singer of Dog Eat Dog going into the audience with the surfboard. That was very cool.
Anton: Was it much bigger then Graspop today?
Igor: The first time we played in 1990, there were maybe 10.000 people, but in 1995 there were I think 100.000 people at one day. Insane.
Anton: Alright, 10 points for you.

5. Which Dutch hardcore band toured around the world with Six Feet Under, Soulfly, Sick Of It All, Madball and Hatebreed?
Igor: Hmmm… I know some Dutch hardcore bands. But just give me the options.
Anton: No Turning Back, Backfire or Born From Pain
Igor: Backfire.
Anton: Ah, that’s not good. It was Born From Pain.
Igor: But back Backfire are from The Netherlands, aren’t they? I really like those guys, I don’t know why I fucked that up. Haha…

6. Who was the original female lead singer from the legendary Dutch gothic metal band The Gathering?
Anton: You know the Gathering?
Igor: No, I don’t know anything about that one. Give me the options please.
Anton: Anneke van Giersbergen, Simone Simons or Sharon Den Adel.
Igor: Simone is here today right? Is she Dutch?
Anton: Yeah, that’s right. So we have Anneke and Sharon left as options.
Igor: Is it not her? Simone?
Anton: No, she’s from Epica. So just choose A or C.
Anton: C.
Jack: Wrong. Haha…
Igor: Female metal can be good, but I’m not familiar with this kind of music.

7. Which Dutch music project had Bruce Dickinson, James Labrie and Devin Townsend as guest vocals?
Anton: By the way, the Dutch guy from the project is called Arjen Lucassen.
Igor: I have no idea…
Anton: I give you the options. Star one, Ayreon or Stream Of Passion.
Igor: Pfrffftfff. I don’t know dude. Haha… B?
Anton: Haha… 1 point for you. 11 points in total.
Igor: That’s a lucky point.
Anton: Alright. You have to know the next question!

8. Which large metal record label was founded in The Netherlands in 1980?
Igor: Roadrunner?
Anton: Yeah! 14 points!
Igor: That was an easy one. With Kees Wessels. I didn’t talk with this guys in many years. With Sepultura and with the first Cavalera Conspiracy album we were signed at Roadrunner.

9. Which Dutch female singer is since 2013 the new lead singer for Nightwish?
Igor: I know the name Nightwish, but I don’t know the music. So I have to guess.
Anton: Maria Brink, Floor Jansen or Caroline Westendorp.
Igor: Is it Caroline?
Anton: No, Floor Jansen. Still 14 points for you.

10. Which death metal band from The Netherlands toured with Death through the USA in 1993?
Igor: Pestilence?
Anton: Is that your final answer?
Igor: Yeah. No?
Anton: I give you another chance by giving you the options. Textures, Legion Of The Damned or Gorefest.
Igor: Ah, that’s Gorefest. I first though Pestilence, because that was also a Roadrunner band.
Anton: You did very well. 15 points in total!

Igor: I know my Dutch shit man. Haha… I thought I was gonna do bad, but I started my hard drive and picked some stuff. And I was lucky sometimes too. Haha…
Anton: Obituary were with the two brothers Tardy and they had 7 points.
Igor: They had two people? Haha… Fuck thoose guys man. Don’t bring my brother Max here, because he will know all of the questions. The next time we do both of us and then you will be in trouble. Haha… Then you will say: “you guys know more than me!” Haha…
Anton: Max said recently in an interview: “Touring is just for me and Igor to hang out.”
Igor: Yeah, that’s it man. Fuck music. We just wanna play video games in the bus. Haha…
Anton: Haha… That’s a nice one for ending. Thanks for your time and enjoy the tour!

Cavalera Conspiray: 15 points. Check all the other bands that played the ‘Dutch Heavy Music Quiz 2015‘.