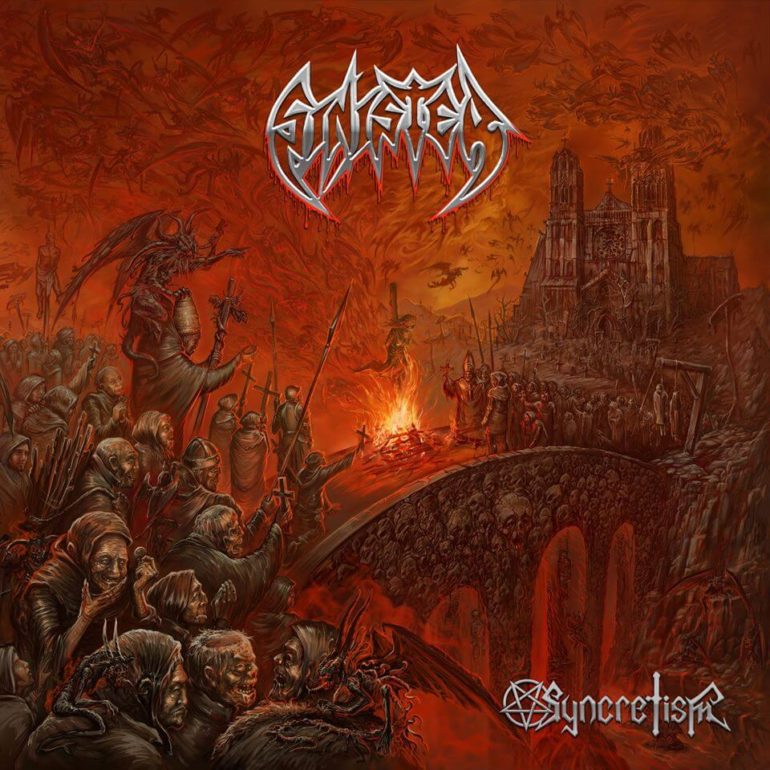 When we talk about Dutch old school death metal, we talk about Sinister. This band from Schiedam is around since 1988 and released already 12 full length albums. With the release of number thirteen ‘Syncretism’ in February 2017, Sinister is still going strong. With four relative new band members, founding member and vocalist Aad Kloosterwaard can’t get enough to be at the top of the Dutch death metal scene.

What can you expect from a death metal band who is around for so many years? Well, old school death metal, but in a kind of modern jacket. The sound is fat with low tuned guitars and the songs are basically fast with room for beautiful slow melodic and symphonic parts. It’s like a massive wall of concrete, with blast beats, brutal vocals and an aggressive vibe. Compared to their previous (cover) album ‘Dark Memorials‘ (2015), ‘Syncretism’ is more layered, warmer and more death metal. There’s also room for experiments, like the adding of orchestral and symphonic parts and a touch of black metal. Maybe the new guys took some of these influences with them? My highlights on this album are the title track ‘Synctetism’ and ‘Confession Before Slaughter’. Especially the use of orchestral parts and atmospheric sounds gives this last song, and actually the who album, a sinister and dark dimension.

Sinister released a damn good and delicious death metal album. Nothing more, nothing less. Pumping riffs, blasting drums and a bunch of vocals who seem to come straight from the grave. When you like death metal with a symphonic/black metal touch, doesn’t hesitate to check ‘Syncretism’ out. These guys still know how to mosh things up!