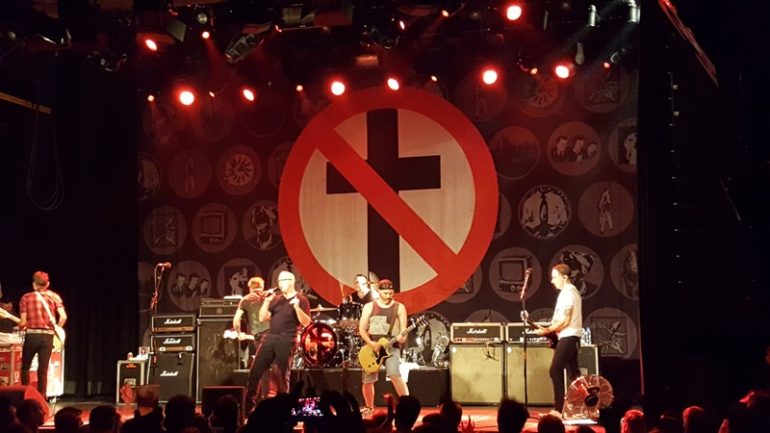 July 20, 2016 | Melkweg, Amsterdam – It’s a sunny evening when the Melkweg is getting ready for a classic ‘punkrocknight’. The Dutch punk rock band Note To Amy has the honor to play as support act with the legendary and almighty Bad Religion (USA). When I enter the venue the temperature is nice and cool and I hope it will stay this way the next 3 hours! Note To Amy (NL)
The Dutch punk rock band Note To Amy is around for about 10 years and played over 200 gigs. As they are big fans of Bad Religion (they even have an acoustic Bad Religion set), they deserved it to play this evening as support act. In about half an hour they bring us 9 traditional punk rock songs including melodic (backing) vocals and catchy guitar riffs. The sound in the Melkweg is very good and the songs the play are a various mix of fast and slow songs. There are even some parts with double bass drums and thrash metal riffs, which I appreciate very much! It’s nice to see these guys having fun on stage, but to be honest I miss the power and energy in their performance. I can hardly explain what it is, but I think it has something to do with the fact that they are to concentrated and don’t wanna fuck things up. Not a big deal, but just something I would like to mention. Nevertheless, Note To Amy is a perfect opener to warm up the audience for Bad Religion! Bad Religion (USA)
The backdrop including the large crossbuster logo is hanging, the drumkit is released from it’s cloth and the guitars are tuned. After the intro tune the band climbs on stage and starts with the song ‘Crisis Time’ from their latest album ‘True North’. The audience is not going crazy immediately on this one, but when the second song ‘1000 More Fools’ begins, the mosh pit starts to grow. That’s proving most people are here to hear old classic songs. And that’s gonna happen! The band is pumping hit after hit into the audience. Most songs are from the albums ‘Suffer’, ‘Generator’ and ‘Against The Grain’. A real hit-machine is playing with fun and the quality of the sound is very superb, including the vocals of Greg Graffin. After ’21st Century (Digital Boy)’ Eelco from Note To Amy is very suprised, when he is called on stage to perform ‘Suffer’. A dream comes true for him!

After 28 songs it’s time for a short break and then the encore with the classic songs ‘Punk Rock Song’, ‘You’ and ‘American Jesus’ is ending this evening in style. I saw Bad Religion many times and they never disappointed me. A band with attitude, a message, great songs and 37 years of experience. Up to 40!