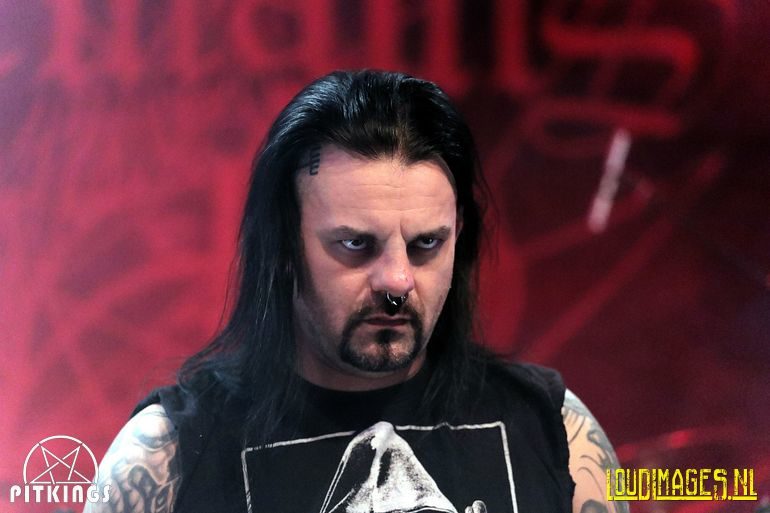 May 3, 2019 | Gigant, Apeldoorn – Again a metal filled night in Apeldoorn and what a line-up it is today! The Morbid Fest Tour 2019 is hitting Apeldoorn and with 4 well seasoned bands of which the youngest band is 23 years of age!
These bands all know how to perform and how to play a crowd, so I am looking forward to this.

There is one major uncertainty for the organization. On this same night, Netherlands Death Fest is starting in Tilburg and this is a big ass festival of 3 days with more or less the same genre. The attendance could be low, but with these solid names it is hopefully going to turn out OK.

Sadist (ITA)
The youngest band, with 23 years of experience, has the honor to start this night and the number of people present are what could be expected on this time. For everybody who came later, you missed out a kick ass gig of these Italians!
Singer Trevor walks on the stage with a running chainsaw in his hand and a devilish looking mask on his head. This sets the tone for the gig of these Italians.

Trevor has made a real effort of his appearance. His leather apron with pouches and chains, combined with the horned mask, make him look like the butcher from hell.

The melodic part of this band’s genre is very audible present and as the people file in, there are more and more heads that move to the beats of Sadist.

After some time, the mask get hot and Trevor puts it on the mic stand, but this doesn’t effect the atmosphere at all. His impressive presence makes it possibly even more sinister as he towers over the front row.
At one point, the bands gets in to a more mellow part in which solo’s are placed. This sounds surprisingly good! With all the tempo changes and the true melodic death metal this is some goddamn opening act!

Atrocity (GER)
After a swift change over, this band continues with the same amount of energy as their predecessors. Fun fact is, that this is actually the same line-up as Leaves’ Eyes without singer Elina, but then way more brutal. The same Leaves’ Eyes who appeared to me they operated outside their comfort zone about a year ago.

With Atrocity this band is completely WITHIN their comfort zone! This OSDM is very varied and is brought by a very enthusiastic band and an energetic frontman.
Singer Alexander tells that the re-issue of their first single “blue blood” was seeing the light during their 70.000 Tons of Metal Cruise and by the time the came home, Nuclear Blast had already mailed them to tell them there were going to be colored variations of that single on vinyl. All they had to do was find a drummer for it…

During this gig, the venue starts to fill pretty nicely! It is great to see a lot of people in front of the stage, especially whith Netherlands Deat Fest going on on the other side of the country.
Alexander urges everyone to come forward and reluctantly they obey and near the end there is some movement in the crowd and hair is flying at the front of the stage.

When the show is over a kid wants to have his picture taken with Alexander en he hoists him on to the stage and takes time to get the picture taken. Nice one!

Vital Remains (USA)
This time the changeover is not as swift as it was supposed to be. There are a lot wires, which are not all connected the way it should be. When it is finally solved, there are 20 minutes lost. The audience doesn’t mind it a lot. The beer is cold and the DJ’s spinning some fitting tunes.
When singer Brian is handed the mic he is on a roll.
After the first song, he tells his audience he is expecting a certain amount of violence during his show. He adds to that: And if I don’t get if from you, I’ll fucking come down there and do it myself!
That puts some gasoline on the fire, as the crowd starts to move quite a bit now!

Brian is quite happy with the turnout himself. He did too noticed that Netherlands Death Fest was on the same date and thanks everybody present for coming to Apeldoorn. The Netherlands is always great for Vital Remains and not in the least for the support of their music. The relaxed drugs laws can count on Brian’s approval too. At home weed is a problem and in the Netherlands it isn’t he smirks.

After this bit of small talk, Brian says it is time the smash your best friend on the head in the moshpit and the furiously paced metal blasts form the speakers again. It is pretty wild every now and then in the set and Brian keeps adding fuel to the fire.
This set is raw, it is brutal and Brain is stage diving in to the crowd twice; once from the stage and the second time he jumps from the bass speaker on the stage. Being carried by the audience his sings his part as if he is lying on his couch.

When the set is over Brain has one last message for his audience: I hope you all get high, get drunk and get laid this evening! And with that their set is over, leaving his crowd half numb by this awesome performance.

I Am Morbid (USA)
Again there is some ado on stage. There are a lot of loose wires now and some mics don’t work. When that is finally sorted out, a three note check is done and there is no further bull shitting around.
I Am Morbid enters the stage and is hitting the recovering half numb crowd square in their face with “Immortal Rites”. Goddammit this is loud! This is fast!

David sees quite a lot of people of the same age as his and that makes him happy. “We’re doing something good!” he concludes. He is also happy to see a lot of younger people too and is especially happy to be in The Netherlands too. The Dutch were always very supportive towards him and that is being appreciated.
It is undenyingly true, that David has a great sense of humor. In between songs he makes quite some funny remarks.

But back to the music!
With “Rapture” the speed is going up one notch and it is getting pretty wild in the pit with some huge guy, but all in a civil way of course. A lot of Morbid Angel songs are played
Personally “Eyes to See, Ears to Hear” was the track of the night, together with the last encore.
With “Maze of Torments” the set comes to an end, but it does not take not take a lot of effort to convince the band to do an encore and what an encore it is!

It is, as if the band is turned op the pace considerably. Added to the last two songs on the setlist, two more are added and these hammer their way through the eardrums of the crowd. Every last drop of energy is going into these last four songs and that is just simply awesome! With “World of shit” this Morbid Fest comes to an end. What an energy and what a performance!

When the last note is played and the stage is cleared, the venue empties slowly. The topic of conversation is mostly on how fucking awesome this night was.
MorbidFest 2020 in Gigant Apeldoorn. Please make it so!