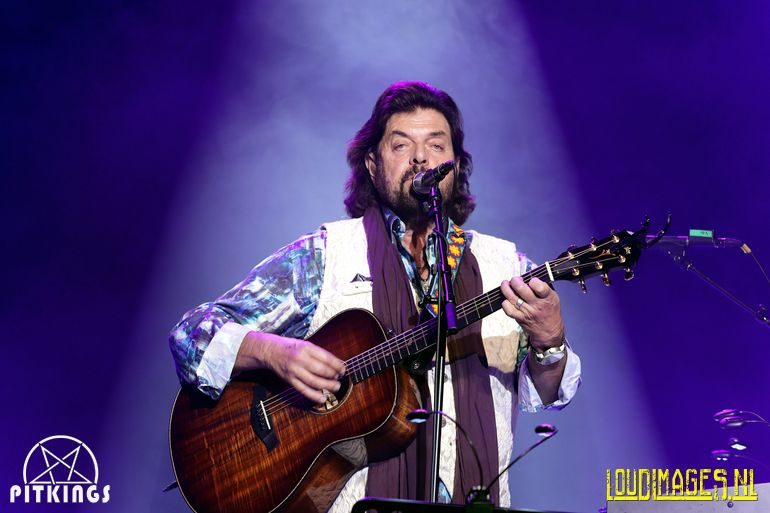 May1, 2019 | De Vereeniging – Stuck in traffic at the entrance of Nijmegen, I thought back to the first time I went to a performance of The Alan Parsons Project. It was not far from where I was now; in Arnhem during the World Liberty Concert in 1995 (in which he had a big part) and it was impressive as hell!

The second time it was in Ahoy in 1997 on the same night I went on holiday, right after the show. So both were quite some time ago and I looked very much forward to this night.

With 5 minutes to spare I put on my gear and when I walk into the venue of De Vereeniging, the lights go low and the crowd starts to cheer…

And a crowd it is! The venue is packed! Honestly I didn’t know how many would attend this gig, as it is a bit old fashioned progressive rock, but my age category was well represented!

As I work my way to the center of the stage I see a lot of younger people, but even some seriously elderly people are standing in the first few rows too!
There are a limit number of chairs available, but these guys just want to be as close as possible. Good on them!

As always, Alan Parson himself is more in the back of the stage on a riser, as if he is orchestrating his band.
The first song is one from the new album and although the people are enthusiastic. The roars sound loudly when “Damned if I do” is started and when “Don’t Answer Me” is set in, it is even louder!
After three songs, my time at the edge of the stage is over and I walk around to get some overview shots.
On his riser in the limelight, Alan Parsons has a majestic look. A bit of a tired look, but still majestic.
Even for Alan the years are counting as he needs a banister to get on and of his riser, but at 70 there is nothing to be ashamed of. I see younger people sitting in the chairs during the entire gig in the back and on the balcony.

During “Psychobabble” I went to the second and highest balcony overlooking the complete venue and I notice there are only a handful of mobile phones held up in the air. I guess it is a generation thing, as most 50+ onlookers are enjoying the show and occasionally snap a picture. During the well known songs, there are more phones for about a minute. The only time there are a lot of phones in the air is when Alan is asking them to shine the lights of the phones every time he gives the sign, like lighters in the previous century.

The earlier mentioned enthusiasm of the crowd is striking. A lot of people sing along and in between songs there is a lot of response for the band. Also during solos and after them, there are a lot of cheers and clapping.
All of a sudden and much too soon it is time for a break. As there is no support act, this is not bad and I walk around the venue to checkout the merchandise only to find out, there isn’t any…

The first song after the break is “I Robot” and I’m standing in the back of the venue slightly above ground level, to catch a picture of the impressive light show Martin Thomas has made.
It is clear the people are happy the gig is re-started, because the cheers are loud! Even louder than the first leg.

In part two the band is performing superb like in the first leg by the way.
Jeff Kollman on guitar is very much present and performs like a live guitar player should play, as is Todd Cooper but he is on saxophone and vocals. P.J. Olsson is vocally stellar. Although all singers this night have great voices, P.J. impresses me the most.
Alan is vocally not stable at all times, but no one gives a damn. He is a legend and at 70, he is entitled to a few glitches during a gig of this length.
When “Limelight” is announced by Alan Parsons, he dedicates this song to Eric Woolfson, his longtime buddy in creating their fabulous concept albums.

The special guest singer for “I Can’t Get There From Here” is Jordan Huffman. Alan Parsons announced him as his future son in law. The interesting bit on this song is, is that it is connected to the Patrick Read Johnson’s film “25-5-77”; the date of the premiere of the first Star Wars movie.
Jordan is dressed in a sparkling jacket which reflects the light of the spotlight, which fits the Star Wars themed song in a way.

The solo on synthesizer/piano by Tom Brooks which connects Prime Time and Sirius is impressive as is the light show that goes with it. The crowd is being mislead by Tom as he plays the intro of “The Turn Of A Friendly Card”.
When they start cheering, he cheekily improvise another melody and the bands joins in and with a colorfull lightshow.

The audience get beside themselves as the first notes of “Sirius” sound! Now everybody is filming and during the following “Eye In The Sky”, the entire venue is shaking by the sheer volume of the cheering and later the singing along of nearly everybody in the venue! Damn this creates a goose bump or two and than the gig is over… almost, because the crowd cheers for an encore and the get it!

“Old and Wise” is the first encore and I there is a howl of appreciation going through the venue and at times the band is hardly audible above the singing crowd.
When the second encore (“The System of Dr. Tarr and Professor Fether”) is started, I go outside and pack my stuff to be just ahead of the people. rushing out.

It was a pity that there was no merchandise. But Alan himself explained it in a way by asking people to watch the clips of the new songs on YouTube, as nobody buys CD’s anymore. Of course you all do! He added with a broad smile.
With a large selection from the impressive legacy of the Alan Parsons Project this was a night filled with mainly memories. The newer material was received well, but the majority came for the old stuff.