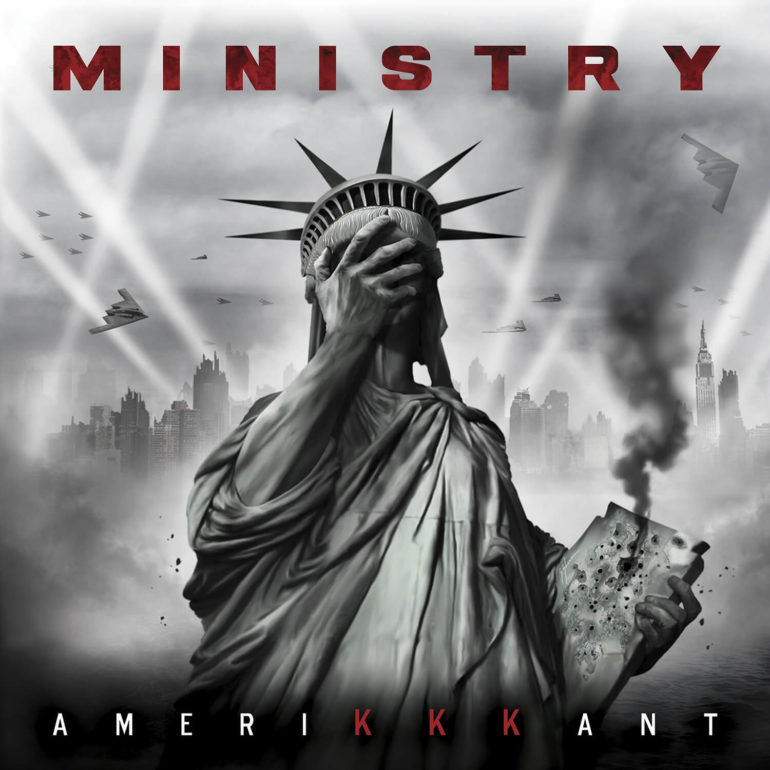 They’re back! Industrial metal pioneers Ministry are making a familiar move: release an album which resembles the atmosphere in the country. The album ‘Psalm 69’ had a huge impact in 1992 and Al Jourgensen and friends tried to do that with AmeriKKKant (March 9, 2018) as well. It maybe was a bit unexpected, because Al told the public that Ministry wouldn’t release anything else in 2012, because of the death of guitarist Mike Scaccia. Al grieved for a while, but with Trump’s presidency he felt like a new album would work because “the circumstances are right”.

Like I said, the album looks like a reincarnation of their successful album ‘Psalm 69’. Both have the mechanical sound effects, both have essential intros and every song contains parts of interviews or speeches as samples. For example: the song ‘I Know Words’ has a few famous one-liners from D. Trump, ‘Wargasm’ has ‘The mother of all bombs’ and ‘Antifa’ has a much more chronological speech. The track ‘TV 5/4Chan’ made me think about my favorite song of Psalm 69: ‘TV II’. The song has the same concept, but is a bit shorter.

The album features a variety of ‘instruments’. The best example is ‘Twilight Zone’, where we hear a mixed harmonica and a vague violin. Despite the fact that Ministry started in 1981, I have to say that it’s also likable for you as a younger metal head! Their second single ‘Wargasm’ has a very catchy tone and the chorus will get stuck on your head. Also, the song ‘Victims of a Clown’ has samples in the chorus, which you won’t forget that quickly neither.

Overall, this album matched my expectations. It has some very good lyrics, which could bring Al in trouble (political songs are usually not critiqued that well). Nuclear Blast was the only record company that wanted to sign Al, so hats off to them for releasing such a beauty. It was a tough job, but Ministry definitely made an album which could be called ‘one of their best’.