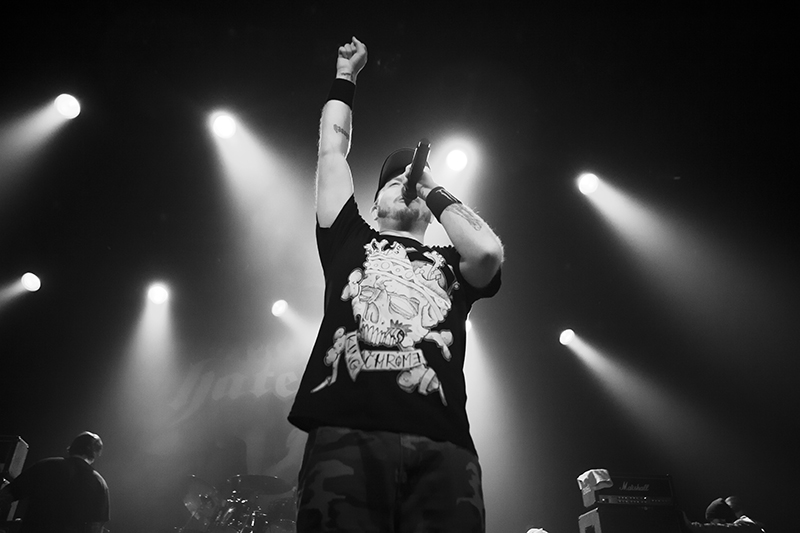 April 1st, 2015 | Melkweg, Amsterdam – The legendary metalcore band Hatebreed and the Dutch death/thrashmetal band SEITA were moshing the Melkweg, Amsterdam at April 1st, 2015 (no joke…)! The American band Hatebreed are considered to have helped pioneer this genre in the 1990’s, blending influences from hardcore punk and heavy metal. SEITA is from Amsterdam and their latest album ‘Asymmetric Warfare’ is from 2012. Checkt the review form Tessa and the pictures from Melissa.

SEITA
The evening started with the Dutch death trash metalband SEITA. The whole show was about the new beginning of the band: a new drummer, new songs and an album coming soon. The Melkweg wasn’t that crowdy, but everyone who was there liked the band. SEITA was excited to play this evening and gave their all. There was a lot of interaction with the public, the guys had a lot of energy. Good guitar riffs, a thight set and a good voice made it a great support of Hatebreed.

Hatebreed
Round 20:30 it was time for Hatebreed to climb the stage. From the beginning it was pretty clear that we were only hearing their greatest hits tonight. They played songs of every album. From when the music started till the end half of the Melkweg turned into a moshpit. Only the last couple of rows stood still. The band was very enthusiastic and jumped up and down. The stage was a little dark and mysterious, but that’s exactly what’s best for the band to make it an amazing show. After less then an hour and a half it was time for Hatebreed to go. The crowd can look back on a great show with a lot of fun and interaction.