Due to a slow check in at the hotel caused by a lot of elderly people fleeing the hotel and metalheads from all over the world wanting to get in, I was too late for Tankzilla and I was not alone. 2 large queues were waiting outside of the ice rink for the doors to open.

Rumour has it, that Testament had to soundcheck or practice and that it took some more time than anticipated. The doors for the audience opened about the same time as Tankzilla started their gig.
So sadly I had to miss Tankzilla, but with me a few hundred visitors of some wanted to see Tankzilla.

So the second band of the day was going to be the first band of this festival for me and Dress the dead (USA) was going to be that band. With Craig Locicero (Forbidden) on guitar and Mark Hernandez (Forbidden) on drums it was should be quite some performance. When Kayla Dixon comes out, the audience is impressed; Not only can she grunt but her clean vocals are even impressive! Add to that her bright red hair and theatrics and you have the all the ingredients for a great set!

And exactly that it was!

The metalheads were still pouring in and slowly it got busy in front of the stage.

Next were the young guns of Vended (USA). These youngsters have quite some pedigree in their ranks; singer Griffin Taylor is the son of Cory Taylor of Stone Sour and Slipknot and drummer Simon Crahan is the son of Shawn Crahan (Clown) of Slipknot.

Being a kid of these legends comes with quite some pressure, envy and prejudice which is something you can do without if you are young and on the road, so I am curious what they can do!

The band seemed nervous when they come out on stage, but all that is soon gone. Griffin has the same voice as Cory but a bit more harsh and is all over the stage with his white hair and blue and black bodypaint.

The show is wild, but managed and although not very innovative it is entertaining.
I guess their ambition to be the biggest band in the world is a good focus point for their future, but it needs some work to get there. In an interview afterwards the tell how all of them are home sick and I thing that is a good thing to address. Metal is not only booze, loud music and fun. There is stuff that is less glamorous and to talk about that is not weak or stupid.

Firewind (GR) was a whole other story. This band goes back to 1998 and plays more the hard rock side of the spectrum and a lot of older metal heads bob their heads with a cold beer in their hands. The band was playing without their backdrop, because that got lost at the airport. It didn’t have any influence on their set. I loved it that almost every song had a guitar solo from Gus G. in it.

The highlight (or low point for some) was the version of ‘Manica’ from the movie ‘Flashdance’. I knew metalheads are known for their broad musical taste, but to hear hundreds of them sing the chorus of this song at a metal festival was jaw dropping.

It is was getting busy and due to problems to find volunteers to work at the bars, the lines in front of the bars grew and grew. At one point it took more than 30 minutes to get a drink. The advice to get a larger amount was a bit odd; unless you can (want to) drink a liter of beer in 15 minutes, you ended up with a luke warm beer…

I must confess that Cattle Decapitation (USA) is not on the list of my favourite bands. A lot of the lyrics were unintelligible or were replaced by pig squeals. The pit was getting pretty wild so there are enough fans around to enjoy this band.

With Death Angel (USA) being next the story is a bit different. This band has been coming to The Netherlands since 1987 and they see our country as home away from home. It seems that Death Angel always give a few precent more in The Netherlands and to be honest; I have never seen a bad or even mediocre performance of this band. The energy of Death Angel was high from the first notes of ‘The Ultra Violent’ ‘till the last ‘Thank you and goodbye!”

Right from the start of the second song, there was a wild pit that continued right up until the last notes.

The programming of Dynamo Metalfest was spot on with the next band. With Exodus (USA) right after Death Angel the crowd went on where it left with Death Angel. Steve Souza was having a great time. He too was reminiscing about the times on Dynamo Open Air in the eighties.

Two thrash legends in a row is just what the doctor prescribed! I’ve never seen a crowd so wild for such a long time in row.

One thing you can say about Doom is, that there will be hardly any pit, so Candlemass (S) is the resting point before Testament is going to rip the ice rink to shreds.

Candlemass celebrated their 35th anniversary of their second album ‘Nightfall’. The band was supposed to played it integral at Dynamo, but some songs were left out and some others crept in. Nevertheless for the doom lovers this was the gig to be!

Not being the youngest, the band still performs very well! The faster parts weren’t all that fast and the high notes were not as high as intended in 1987, but damn… what an impressive performance!

The organisation of Dynamo Metalfest had learned from the previous debacle with Testament and besides an extra soundcheck, Testament (USA) got 15 minutes extra for their change over. Nothing could go wrong so you might think.

Testament decided they did not need the extra 15 minutes and kicked of their set, while everybody was still getting something to drink or were chewing on the last bits of their meal. Quite an odd way to start a gig!
Nevertheless, Chuck and his friends looked exited and with Gary Holt back from his Slayer-duties it all sounded pretty good!

The lighting on the other hand was crap. Mostly blue, green and red light from the back with a lot of smoke which made the band hard to see at times.

In front of Chuck the fans went wild and Chuck fired them on. This time without his light emitting baton but with a normal microphone stand.

Of course the show ended 15 minutes before it should end, as they started 15 minutes earlier. No encore or whatsoever. Dissapointing.

The show was performed professionally and the one person who had the most visible fun was bass player Steve DiGiorgio. To be honest, I thought this was on par with the previous performance of Testament at Dynamo. 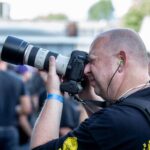 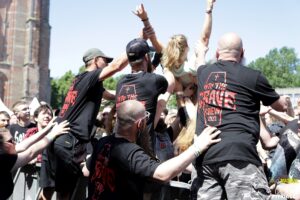