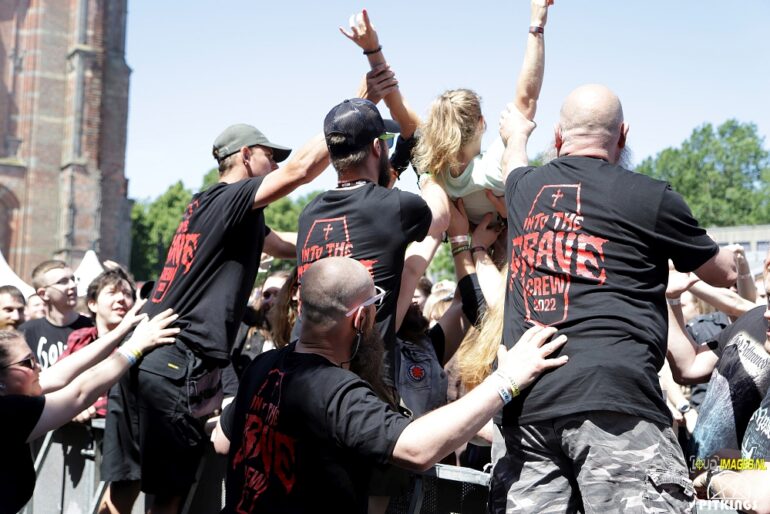 June 11, 2022 | Leeuwarden – On this second day, the weather would be even better than yesterday and I expected it to be more busy than yesterday, as there were quite a few quite popular power metal bands on the bill today and power metal brings out a lot of younger metal fans who this time dressed up as pirates; as Alestorm was the headliner.

It was an early start, but with Enforcer (USA) on the Reaper stage tearing up the place at ten past noon, it was a great way to start the day for some; metal! and a beer in the hand! And I am one of them!

Hailing from Richmond Virginia USA this band was going at it full force. Singer Knox Colby was so enthusiastic, that in a wild move his microphone went flying and nearly fell of the stage. Unfortunately the mic didn’t survive this drop and the crew was working hard to provide him with a replacement mic. By the start of the next song there was a new mic, but one with a cable. It seemed that it restricted Knox a bit in his movements, but vocally there was nothing wrong!

There are a lot of heads banging and beers raised; a great way to start a sunny day!

The first act on the main stage was Wind Rose (I). I know this band well, as I have seen them a few times before. It is not really my cup of tea, but it must be said, that their power metal is quite catchy. It was getting quite hot on the square in the middle of the city of Leeuwarden and the members of Wind Rose wear their fur trimmed outfits; they must have been be melting!

There was already a fairly large crowd in front of the main stage, consisting of mainly younger metal fans and that is a good thing!

When the last sounds of Wind Rise fades away, I was on my way to the Reaper stage for the gig of Sisters of Suffocation (NL). During the first few songs the band seemed a little ill at ease; the movements looked a bit staged and there was a lot of looking at each other. There was quite a crowd in front of the Reaper stage; all the way back to the bar at about 50 meters.
After a few songs the band loosened up a bit and singer Linn was doing quite a job to fill the shoes of Els Prins, who was not able to perform yet. We wish her speedy recovery, because she is undoubtedly the front woman of Sistes of Suffocation. And that is no critique at Linn, as she did a hell of a job!

The odd thing with Cobra the Impaler (B) was, that the band was announced for next year even before they performed!
I’ve never heard of this band before, so I assumed that this was going to be impressive. I got a bit disappointed and not only me. The hard rock of Cobra the Impaler is not bad, but there is something missing. The lack of a lively show on the stage didn’t help either, although both guitarist tried to make something of it, but there is so much a guitarist can do.

The crowd was reluctant and some songs were perhaps too complex or not catchy enough for the gathered crowd. Unfortunately, but next year there will be a new chance for this band.

The contrast couldn’t have been bigger with Night Demon (USA) on the Reaper stage. This band knew how to play the crowd and moved around the stage like maniacs. The set was loud and fast and the people go berserk when the band announced their version of ‘Radar Love’ of the Dutch band Golden Earring. It was a spiced up, pumped up version which made everybody enthusiastic; even the metal hating security guys are bobbing their heads!

A few songs before the ending of the set I walked towards the main stage, as Flotsam & Jetsam (USA) are performing… Flots ‘til death!

I’ve never seen a set of Flotsam & Jetsam that wasn’t on par with all their other shows. Frontman Eric is a master in involving the crowd in front of the main stage and so he did this time.

The European tour was going to have a Dutch touch, because drummer Ken Mery had not enough days left on his passport when he boarded the plane to Europe. Cryptosis drummer Marco Prij was asked to play the drums and got one and a half day to learn 16 songs.

Marco did an awesome job and it was fun to see that Eric checked a few times on him an encouraged him. After a few songs Marco owned the Flotsam & Jetsam songs an even the drumfills were exact, according to Eric drumming them with Marco on his air drum in unison.

Back in front of the Reaper stage where Ingested (UK) was performing. Now is Ingested normally not my kind of cookie, but front man – Jay Evans – is something else. Every gig I see of Ingested, the band made some kind of progress, which makes them more interesting to see.

This time it was no difference; Jay was even more expressive in his singing and his brown/yellow contacts made him more demonic than ever!

The crowd loved it when he stood on the edge of the stage, firing them on to make a pit. Of course they obeyed and in the heat of the afternoon it went wild!

After a cold beer I decided to go and eat in one of the café’s near the festival ground and missed out on Orange Goblin (GB) I heard some fragments of the set of Orange Goblin and their ode to Lemmy, but it was not enough to write anything about it.

After a great meal I went over to the Reaper stage where Midnight (USA) were going to start their set. All members wore a kind of executioner style cap with full face cover in the murdering sun and I thought it was going to be a hot set for them. To my surprise this band was from the first second all over the place! Midnight was musically and show-wise insane!

Officially Midnight is a one-man-project of Athenar (Jameson Walters), but live he is assisted by Commandor Vanik (Shaun Paul Vanek) and ‘SS’ (Steve Dukuslow).

This trio is holding the official record of most crowd surfers during 1 set on this festvial. It didn’t take long for the first crowd surfer to appear, but half way through the set, more and more catchers were called in, because there was a flood of people!

The band blew my mind; it had everything I expect from a live band and Midnight kept delivering!

With ringing ears (even though the ear protection) I walked over to the main stage to see Dark Funeral (S). When the band came out, it looked a bit out of place; Their corpse paint was the whitest white in the blistering sun and the atmosphere was a bit weird. Singer Heljarmadr made a remark of that too. Nevertheless, the band was performing as expected but that sun…

Another jump of genre when I walked towards the Reaper stage for the Dutch formation of Heidevolk (NL). After Balders Draumar, Heidevolk is perhaps the most popular band in Friesland. I chose to listen to this set with some friends, rather than taking pictures and buy myself a well deserved cold beer.

The first thing I noticed is, that there is less accent in the singing and that it is more melodic. I don’t know if that is for the better or not, but I was used to the gnawing accent of the Veluwe. The crowd didn’t bother a bit; it was packed! and everybody was jumping and singing along and crowd surfed. And was drinking beer… of course.

At half past eight in the evening, the crowd in front of the main stage had undergone a rejuvenation. The average age dropped significantly and that was all because of the lads of Gloryhammer (GB). Typically power metal draws a lot younger audience in the Netherlands. This time I saw Gloryhamer with their new singer Sozos Michael (Angus McFife V) instead of Thomas Winkler (Angus McFife XIII, Crown Prince of Fife).
After a few songs it was clear to me, that Sozos certainly could sing, but did not had the theatrics of Thomas (yet). Their famed show was therefore a bit dull and the ‘epic fight’ for the glory hammer took place on the stage floor; which was about 3 meters up in the air so almost no one could see what was going on. Personally I still think it is a shame Gloryhammer fired Thomas, there would have been other ways to solve their issues.

But then again… young and old were singing along with the songs and they don’t care who was singing or doing the awkward dramas on stage.

Next up were the legends of Destruction (D) on the Reaper stage… the smallest of small stages! These legends on a small ass stage was almost insulting, but in fact it was a stroke of genius! In my opinion, is this the way thrash should be played; loud, fast and close to the audience and not some three meters up in the air. I did not hear a lot of new stuff, but therefore a lot of old stuff! Destruction was killing it and the fans went crazy. The crew is had a hard time catching all crowd surfers, but they were superb organised and did put everybody safely on the ground again.

The contrast could not have been bigger, when I returned to the main stage. The huge rubber ducky in the center of the stage gave a clue… Alestorm (GB) was the headline band of this day and quite a few of their fans were walking around as pirate all day. The signing session with the band was the busiest of the weekend even though it was rescheduled a few times.
Where there is Alestorm, there is a party. I am not a big fan of them, but I know a good party when I see one. It was very busy in front of the band and that was a nice sight to see. Yesterday it was not that busy even when Carcass played, sadly enough. The gig of Alestorm is hilarious and funny. The band plays well, but for them being the closing act, I think that was a bit overrated.

Near the end of the set of Alestorm I walked to my car in the garage below the festival grounds and I felt the garage moving (as it is designed to do), not as hard as with Sabaton years earlier, but still… It moved…