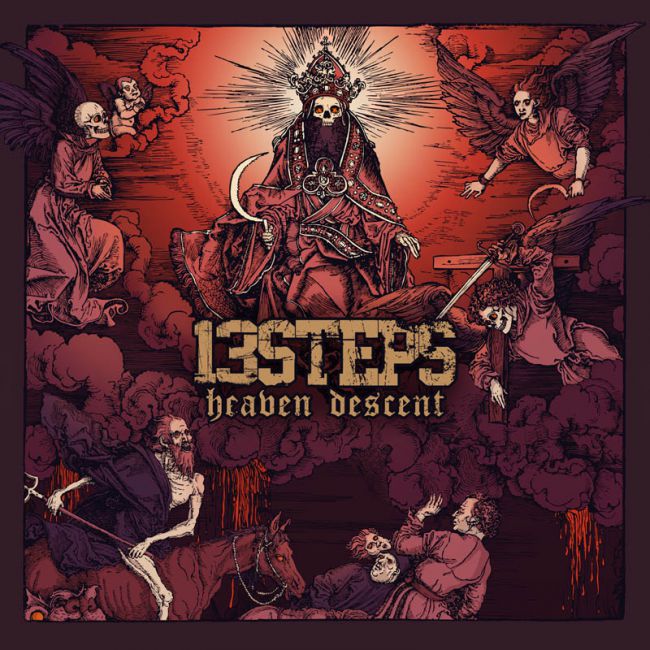 The Dutch metal(core) band 13 Steps was formed in 2011 and released their second full lenght album called ‘Heaven Descent’ in May, 2017. It’s the successor of their debut album ‘Maleficent Thoughts’ which was released in 2015. They gained a lot of positive feedback with this debut album, because of their unique mix of metalcore and a lot of other metal styles. Let’s take a look if they can continue the show!

Boom! Like a ten ton hammer this band is smashing everything on their path. Right from the start it’s clear that 13 Steps released some serious shit. Let me explain what I mean. They use a wide range of different musical influences in their songs, so there’s enough to focus on. It goes from the main ingredients death metal and metalcore (let’s call it the brutal backbone) to the melodic, technical and sinister side of black metal and filled it with the energy of old school hardcore and aggresion of thrash metal. Also the extreme brutal vocals are very divers, just like their musical influences. From growling and grunting to raw and screaming. Together with the fast drums and heavy guitars, they blend it to perfection.

There’s happening a lot in every song, like tempo changes, the use of melodic bridges and catchy riffs. Because of this variety the album never gets boring at all. Also the recording sound is of high quality and not to much overproduced. It just sounds fat and professional! If you wanna listen to something different and wanna step out of your comfortzone, step into the direction of 13 Steps. Just 13 well written metal(core) tracks with a twist! So, my advice: download all their music for free on their website!