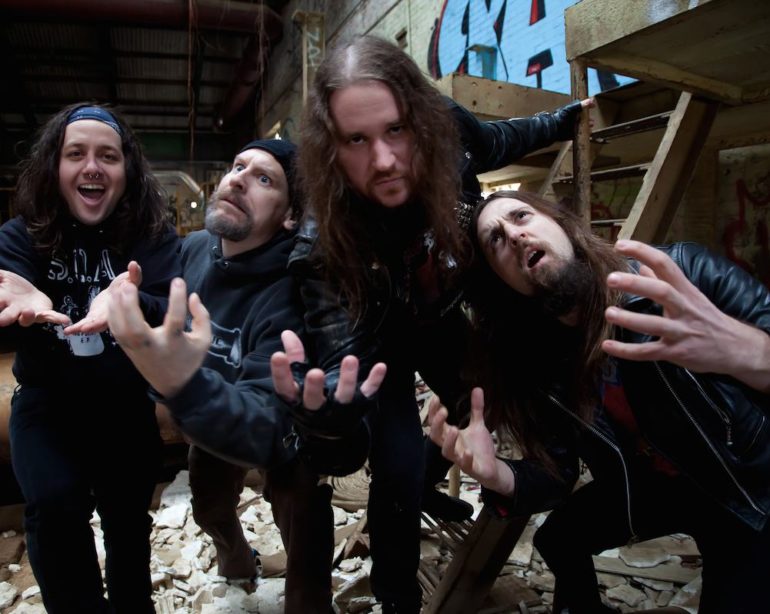 Time for round number 4 of the Dutch Heavy Music Quiz 2016! After Soilwork (23), Moonspell (12) and Grand Magus (7), it’s now time for the American crossover thrash metal band Municipal Waste. At Graspop Anton talked with Ryan Waste (guitar/founder) and asked him the 10 questions about Dutch heavy music.

1. Which Dutch magazine for metal music was founded in 1980 by Metal Mike and Stefan Rooyackers?
Ryan: Dutch metal magazine? And still around?
Anton: Yes, they are. I have some options for you?
Ryan:: Oooow.. it’s multiple choice? Well, give me some options.
Anton: Metal Hammer, Aardschok or RockHard.
Ryan: That’s Aardschok.
Anton: That’s right. First point!
Ryan: Yes! Now I kicked some ass!

2. Which Dutch symphonic metal band is founded by Mark Jansen and got their name from Kamelot’s sixth album, released in 2003?
Ryan: Do I get points if I skip this one? Because I don’t like symphonic metal. Haha…
Anton: Haha…. No, unfortunately not.
Ryan: OK. I will do an educated guess from the multiple choice.
Anton: Epica, Autumn or Nemesea.
Ryan: Epica. I dont like the kind of music, but I like the girl. Haha….
Anton: Haha… Two points for you.

3. In 1990 Iron Maiden covered the song ‘Kill Me Ce Soir’. From which famous Dutch rock band is this song originally.
Ryan: Well, give me the three options, because after ‘Seventh Son’ I stopped listening to Maiden.
Anton: Seriously?
Ryan:Yes, I lost interest then. So a B-side of a Dutch metal band with a French title?
Anton: No, a rock band. The most famous one we’ve got.
Ryan: A rock band? Just give me the options
Anton: Focus, Golden Earring or Brianbox.
Ryan: Golden Earring.
Anton: That’s right. You know the Golden Earring?
Ryan:Yeah, I know them. With songs like ‘Radar Love’, ‘Candy’s Going Bad’. I have one album of them, but I just didn’t know this French titled song.
Anton: Well, another point for you!

5. In 2014 musician and composer Arjen Lucassen worked together with the female singer Anneke van Giersbergen on a musical metal project. What was the name of this Dutch project?
Ryan: Who was that girl?
Anton: She was in the Gathering. And Arjen is from Ayreon and some other projects.
Ryan: Wow, I have no idea. Just give me the options.
Anton: The Gentle Storm, Star One or Stream Of Passion.
Ryan:Star One?
Anton: No. The Gentle Storm
Ryan: Never heard of it.
Anton: You should check it out. Nice album.

6. Which Dutch DJ, composer and musician worked together with Sepultura, Fear Factory and Dog Eat Dog?
Ryan: Just give me the three!
Anton: I have Hardwell, Rude Boy or Junkie XL for you.
Ryan: The first one. I have no idea.
Anton: No, it was Junkie XL. Difficult question. No points for you, Still 6 points.

7. A very popular metal band from The Netherlands is Carach Angren. What type of metal do they play?
Ryan: What’s the name of the band?
Anton: Carach Angren.
Ryan: But there are some many sub genres of metal! Death, thrash, speed, heavy, power metal… Haha…
Anton: Haha… I know, but what kind of metal do they play?
Ryan: I can’t fucking say their name, so I say death metal.
Anton: But I have three options for you!
Ryan: Oow yes, just give the options.
Anton: Groove, thrash or black metal.
Ryan: And what was the name of that band again?
Anton: Carach Angren
Ryan:> Are it two words?
Anton: Yes
Ryan: And what does it mean?
Anton: I really don’t know. Haha… They played at Graspop yesterday.
Ryan: I say groove metal. The shit I don’t like.
Anton: Haha… No, it was black metal. They look like Abbath and Kiss.
Ryan: Yeah, I don’t like that shit. I like real heavy metal.

8. Which Dutch punk band played over 1500 shows and still holds the record of best sold Dutch punk album?
Ryan: A punk band? 1500 shows? Well, just give me the three.
Anton: De Heideroosjes, The Ex or The Apers.
Ryan: The Apers?
Anton: No, De Heideroosjes.
Ryan: Yeah, I’m a traditional heavy metal guy. I don’t listen to Dutch punk music. Haha…
Anton: Haha… Alright. Next one. About Floor Jansen. You know her?
Ryan: Floor Jansen? What did she do?
Anton: I’m gonna tell you.
Ryan: Hahaha…

9. Floor Jansen is since 2012 the lead singer of Nightwish. In which Dutch symphonic metal band was she singing between 1997 and 2009?
Ryan: This is the guy in Nightwish
Anton: No, the girl. Haha… The female singer.
Ryan: She pays all the bills for the wild nights right? Haha…
Anton: Haha… Well, maybe.
Ryan: Just give me the three.
Anton: Within Temptation, Delain or After Forever.
Ryan: After Forever? It’s a Black Sabbath song. Haha… They were amazing yesterday. At Download Ozzy was out of key and people were walking away, but yesterday he killed it!
Anton: Haha… I totally agree. It was just amazing! 7 points for you. Last question.

10. Which Dutch hardrock band scored a worldwide hit in 1982 with the song ‘Burning Heart’?
Ryan: But that’s a Survivor song, but it’s not Survivor.
Anton: That’s also a Survivor song, but they are not Dutch.
Ryan: Well, just give me the options.
Anton: Jackal, Sleeze Beez or Vandenberg.
Ryan: Vandenberg of course! With Adrian Vandenberg. He played with Whitesnake!
Anton: You’re completely right.
Ryan: Now I get some extra points?
Anton: Haha… Well, that’s impressive, so you get one extra point.
Ryan: Haha… Awesome man!
Anton: Let me see. 8 points plus 1 bonus point makes 9 points in total for you Ryan!
Ryan: I’m satisfied!
Anton: You can be proud at yourself. Haha… What are the plans for today?
Ryan: Well, we are leaving this afternoon to Hellfest, because we play over there tomorrow. So, hanging around in the bus and drink some beers.
Anton: Also awesome line-up. Enjoy your stay and thanks for your time!
Ryan: No problem man and good luck!

Municipal Waste: 9 points. Check all the other bands that played the Dutch Heavy Music Quiz 2016.