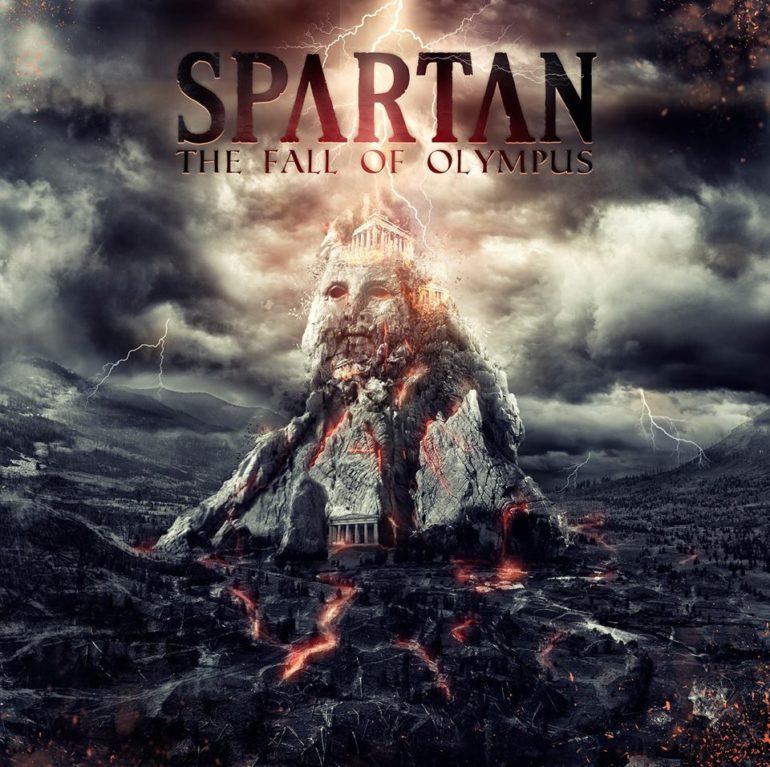 I was pleasantly surprised when ‘The Fall Of Olympus’ from the Dutch power/death metal band Spartan hit my doormat. I’ve seen these guys live before at Metalcon 2015 and these guys were the surprise of the festival for me. Their first full length album, which was released in December 2015, comes in a colorful digipack and the artwork looks astonishing. Let’s find out how the music sounds!

Spartan combines power and death metal with hints of metalcore and thrash metal. This results in an album that’s powerful, grooving and yet melodic. Pounding drums, heavy bass parts, tight riffing and filled with great guitar solo’s. The songs on ‘The Fall Of Olympus’ are completed with epic tales about Greek mythology.

The vocals of Jeff (Jeffrey Rademakers) are heavy and ranging from death to black to thrash metal. What a power this voice brings to the already powerful songs! In a few songs Jeff gets some help from guest vocalists, like Henna Basse from Mayan. In this melodic song ‘Breaking The Chains Of Olympus‘ he delivers a great addition to the album with his vocals. And let’s not forget the beautiful voice of Hadassa Kosten from theNAME in the epic, almost 8 minute tale of ‘Eurydice’s Song’. Also Sakis Tolis from Rotting Christ helps out on the groovy ‘Sons Of Sparta’.

All the songs have strong riffing going on, the guitar work is just amazing. The solo’s show great musicianship and I love the twin rhythm/solo parts in songs like ‘Helena’, ‘Elysium’ and ‘Eurydice’s Song’. The drums and bass guitar form a powerful thriving backbone for the music Spartan creates and lyrically we are treated to tales of great battles, gods and monsters.

It’s impossible to pick a favorite song, because I enjoyed all of them. The thrashy yet melodic ‘The Labyrinth’, the grooving tracks ‘Immortal’, ‘At The Dawn Of War’, ‘Titanomachy’, ‘Written In Sand’ and ‘Glory Awaits’ or the melodic ‘The Age Of Man’, ‘Breaking The Chains Of Olympus’ and ‘A Beautiful Death’. It is just to hard to pick one. I’m sure this album will be spinning more often in my CD-player and I am looking forward to hear more from these guys soon. And if they are gonna play somewhere in the neighborhood, I will be there!