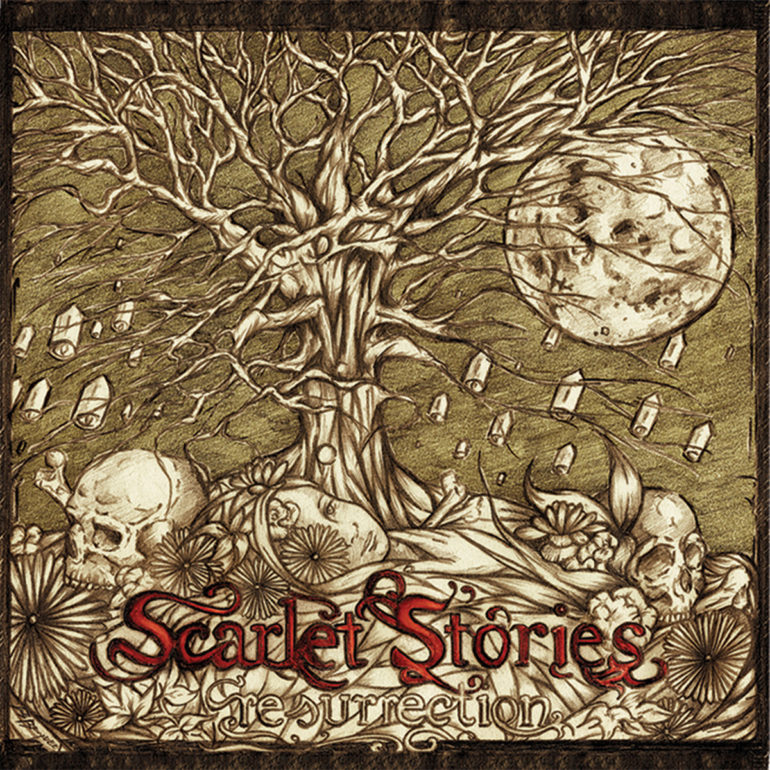 The second EP from Scarlet Stories is called ‘Resurrection’ and features four tracks recorded in full band formation. This Dutch female fronted metal band played already with bands like Antimatter, Stream of Passion, Mr. Big, Marty Friedman and many more. Let’s find out what we can expect from this EP.

The EP is released at May 21, 2015 (yes, we are a little bit late…) and comes with four songs in a nice designed cardboard cover. At first sight, the music sounds to me like a blend of Porcupine Tree, Opeth and Tool, completed with powerful female rock vocals. All the four songs start tiny, with an intro from about two minutes. After the intro, the songs get heavier and halfway the song they reach a climax with double bass, guitar solos and screaming vocals. At the end the songs return to a tiny outro, just like the intro.

In my opinion, four of those songs is enough. When you have heard one, then you actually heard them all. Why? There are not enough real surprises in the songs. That’s pity, because the sound and quality of the songs and how the songs are composed, is from high quality. For me the drums on this EP is the absolute winner. With great rhythms, breaks and fills, he brings this EP to a higher level and makes it really worth listening to. I think when they make a full length album in the future, with more surprises and variation in the compositions, it could become a masterpiece. Let’s hope so, because the right ingredients are already there!

Tracklist:
1. Dance Of Narcissism
2. The Tell-Tale Heart
3. Nostalgia In A Closed Mind
4. Resurrection