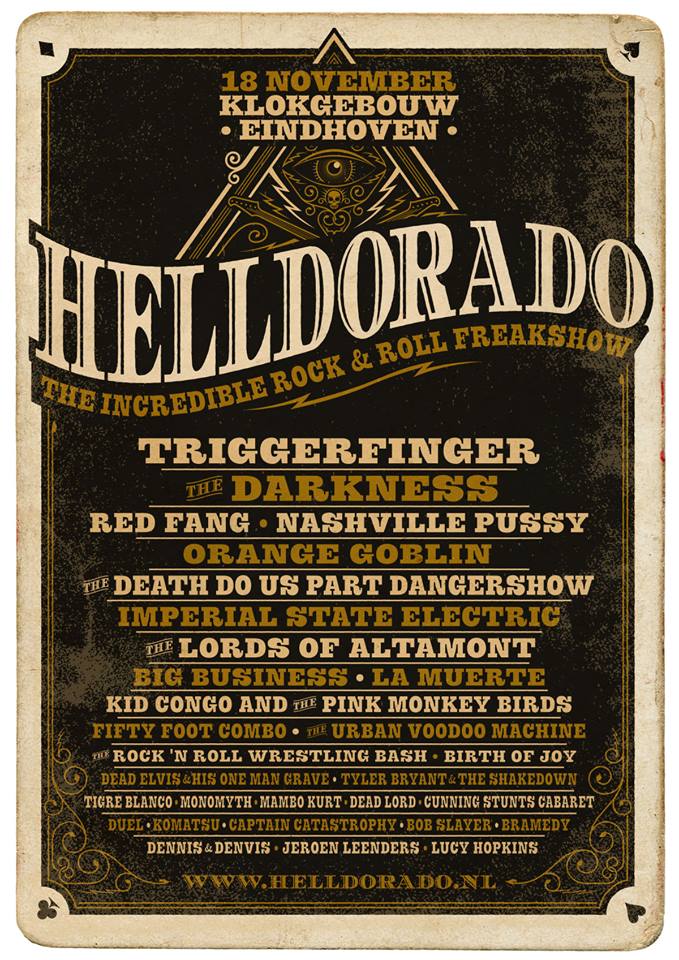 On the 18th of November, the Klokgebouw in Eindhoven will present Helldorado: The Incredible Rock & Roll Freakshow!. A brand new heavy rock event combined with crazy, sexy, strange & bizar entertainment. We picked 5 acts you need to check out at Helldorado! The timbetable with all the bands/acts can be found below. Tickets are selling fast. Get yours at www.helldorado.nl/tickets

The Darkness (UK)
Needs hardly any introduction. The Darkness kicked the charts in 2003 with their debut album, Permission to Land including the hit-single “I Believe in a Thing Called Love”, In 2007 the band split up and in 2011 they reformed. Expect a high dose of entertainment and pure classic hardrock with catchy high vocals!

Nashville Pussy (USA)
When you talk about “sex, drugs & rock ‘n’ roll” you talk about Nashville Pussy. Two men and two woman come to kick your ass with pure rock ‘n roll. Blaine Cartwright is the Bon Scott and Ruyter Suys is the Angus Young of women. Together they create 100 proof no holds barred, no apology rock n roll. This shit ain’t for pussies!

Orange Goblin (UK)
Orange Goblin from the UK is highly inspired by the gods of hard rock, heavy metal, punk rock and underground extremity, from Sabbath, Motörhead and Thin Lizzy through to Celtic Frost, Danzig and Black Flag. Not just the UK’s reigning champions of balls-out, party-starting, booze-fuelled metal, but also a very decent live band. Metal Hammer hailed Orange Goblin as “the best band to get drunk to.” Cheers to that!

Dead Elvis & His One Man Grave (NL)
Elvis may be dead but he is not yet done. The Memphis legend is rocking like never before, back from the grave, alone and more raw and primitive than ever! Taking care of business as a one man band. Just one monster playing drums guitar and howling like he’s got nothing to lose! This is primitive Rock & Roll as it is meant to be! Since late 2005 Dead Elvis had a worldwide impact and has become an inspiration to many.

Komatsu (NL)
When you say Dutch groovy stoner metal, you say Komatsu! This 4-piece stoner band from rockcity Eindhoven is going fast and is not really underground anymore. They released their second album ‘Recipe for Murder One’ in September 2016, which scored a 9.2/10 here at PitKings! Other media wrote: “A Komatsu show will let the ground shake and gets your attention from start to finish. It is truly an eargasm for the trained listener. At a live show Komatsu grabs your throat and then not let go”. We warned you!