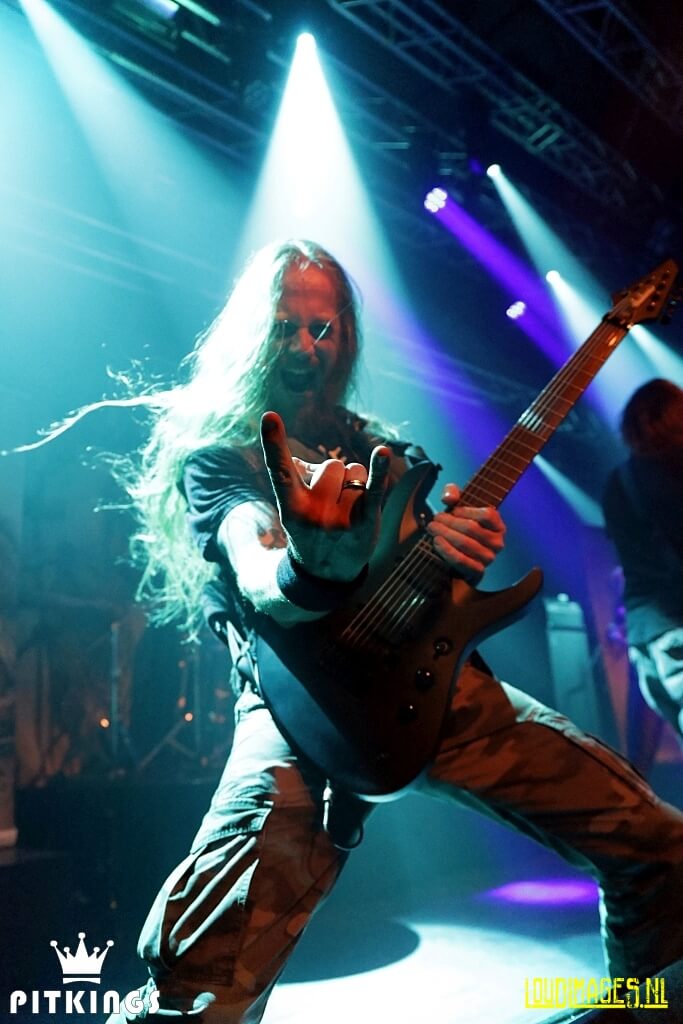 November 24, 2018 | Dru Cultuurfabriek, Ulft – The 2017 edition of Metal on Metal in Ulft, was a huge success and that made the anticipation for the 2018 version bigger. With Hell as reference for stage entertainment, it would be hard for the bands whom travelled to Ulft in the eastern part of The Netherlands. With some interesting names on the bill like The Izegrim, Tankard and Entombed AD, it was going to be a fun filled metal day!

Sadly, one of last years best cover bands, The Covering, had to cancel on short notice and there was no replacement available, so the timetable changed a little.

The Heritance (NL)
I thought I was right on time, but when I walk into the larger of the two halls, The Heritance is still sound checking. Later I heard the guy who should deliver the back line for this festival overslept and the gear was delivered 2 hours late. With 15 minutes behind schedule, The Heritance can start their set, and that is quite an achievement of everyone involved. The light guy, however still has to wake up I guess as everything except the centre of the stage is dark. The centre of the stage is with mainly blue light, rather dark. I know The Heritance reasonably well and it is noticeable that the sound isn’t very great from the start. It takes about 3 songs to get the sound right and then it is pumping like never before. Today’s set list contains a mix of new and older songs and it stomping all over the place. The Heritance as opening band is not a bad decision at all. They raise the bar pretty high and although there isn’t a huge crowd, the atmosphere is great. The band is not influenced by the number of people and play their gig with enthusiasm. Great band to get the old neck muscles warmed up. 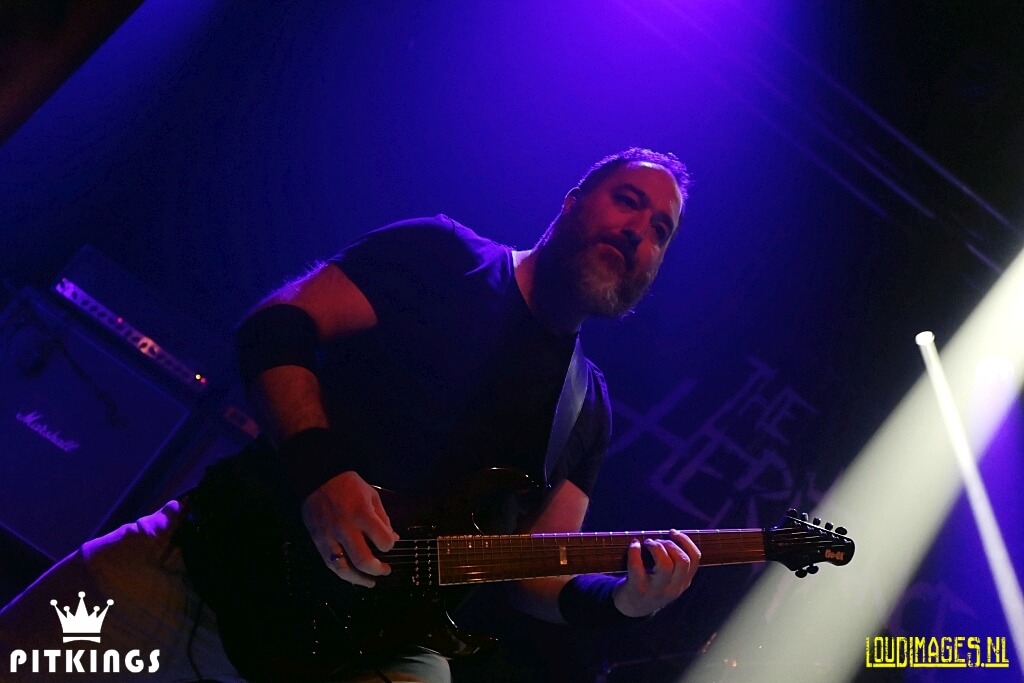 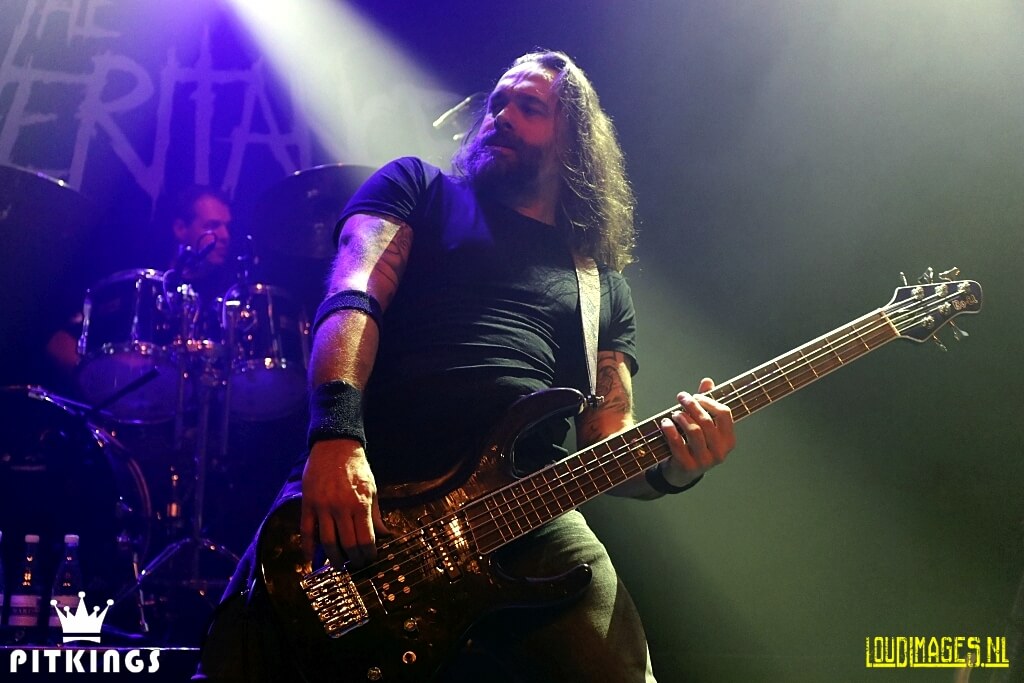 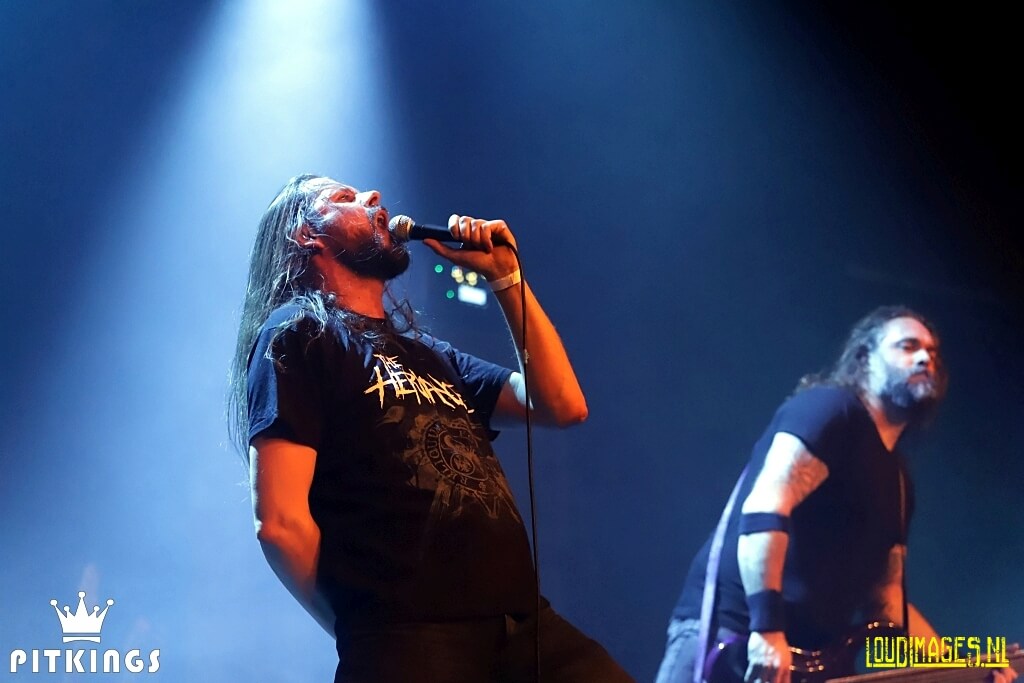 Izegrim (NL)
It has been rather quiet for a very long time around Izegrim and with a new EP in the beginning of this year and a new bass Bas Wijnbergen added to the line up, Izegrim is ready again to conquer the stages again! Freed from her bass, singer Marloes walks around the stage a lot and I must say, it is (even) more fun this way. And to be honest… she sounds better without the bass too. One of the first songs is “White Walls” and that is nothing short of awesome. Marloes is having a blast on stage and she shows it. She kicks guitar player Jeroen, when he is in her way and she is joking around with the audience and the band. It is still not crowded, but there is a decent amount of people. Hair is flying all around and nearly all heads are moving. The new bass player fits in really well. Jeroen is all over the stage, but so is Bas. It is good to see Izegrim back on the stage again and hopefully the new EP, “Beheaded by Trust”, is a prequel to a new album. 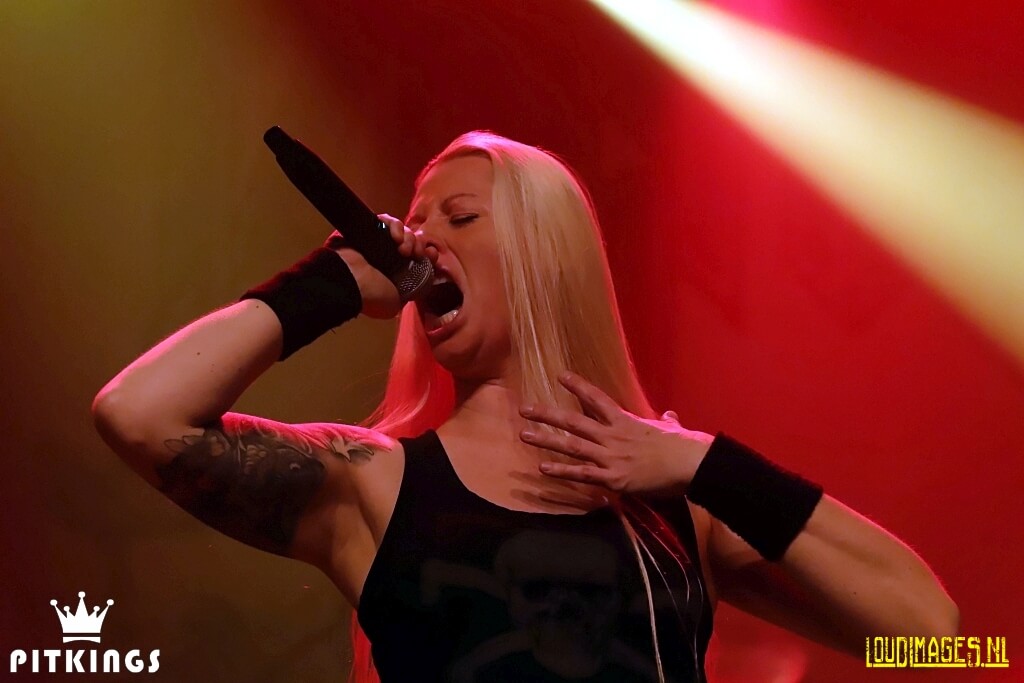 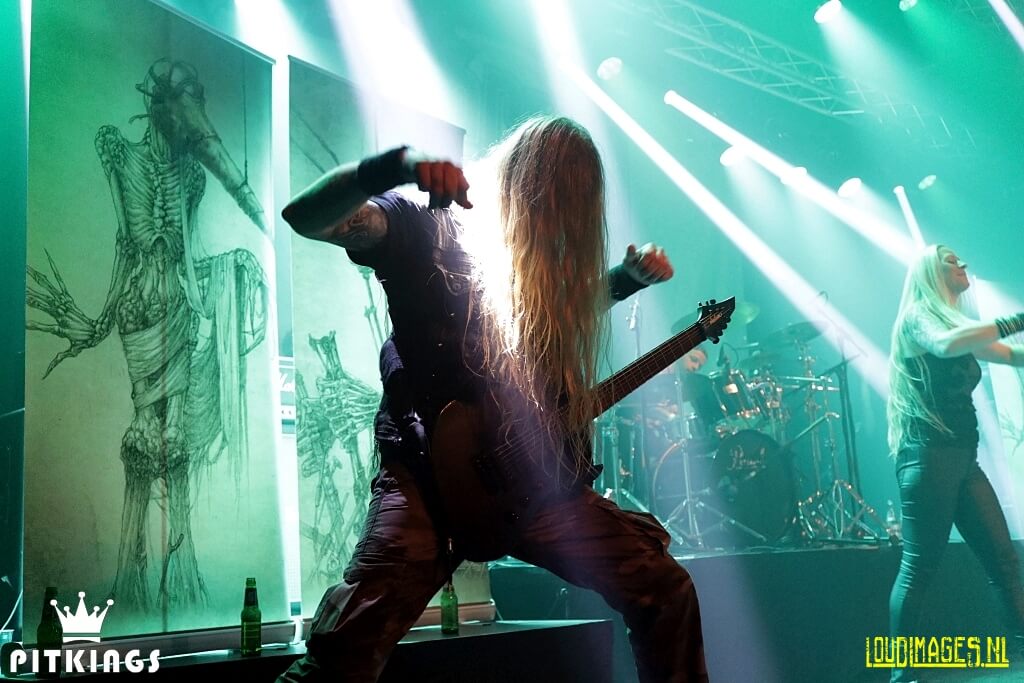 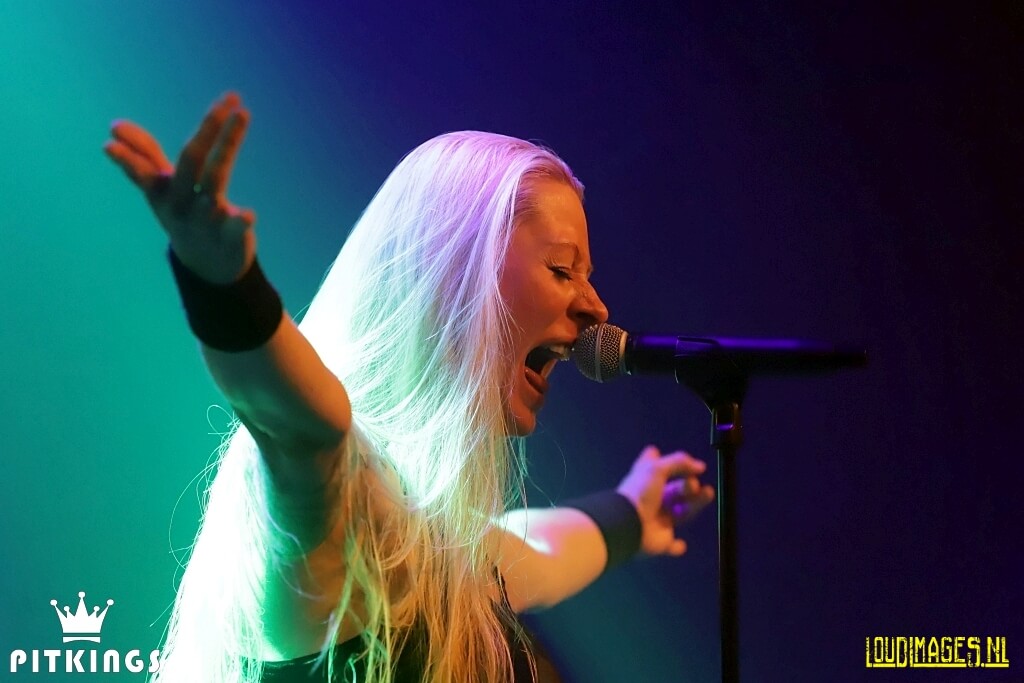 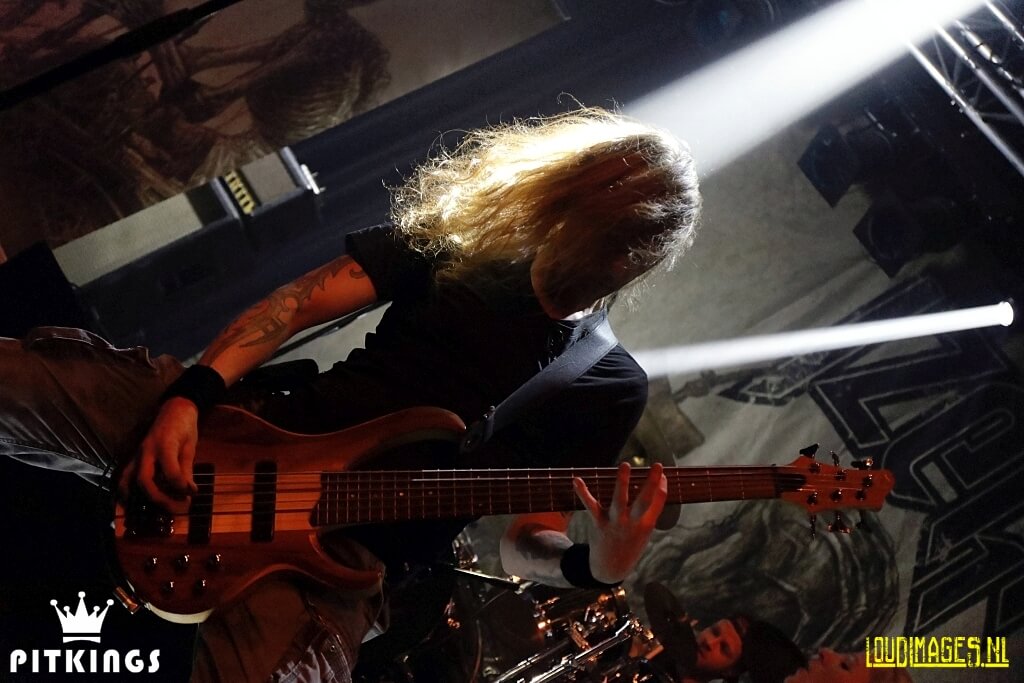 Ost+Front (D)
Before this festival started I had a small discussion if Ost+Front is a tribute band of Rammstein or is a genuine band in the same genre. I opt to the last, but I must add, that there are some riffs that are quite familiar… Nevertheless, Ost+Front jumped in the void that Rammstein left since they stopped making new records since 2009 (not counting the compilation and piano albums). But enough of that, Ost+Front may or may be not the most original band, but live they are nothing short of fucking hilarious! Musically it is pretty good too, but there is so much going on on the stage, that small mistakes aren’t heard or just simply ignored by the crowd and yours truly.

The female keyboard player, Eva Edelweiss, with a horrible mask and ditto voice, is great fun to watch and if you have an eye for detail, the other band members all have something funny or strange. One of the guitarist squints the whole time when he doesn’t play, the other guitar player looks wide eyed at the crowd and the bass player has full white eyes. There is an awful lot going on on the stage and the outfits are impressive. Singer Herrmann Ostfront and Eva Edelweiss act out numerous lyrics which contributes a lot to the superb stage show. I was Entertained! With a capital “E”! After the last song, the band rushes back stage and I go and grab something to drink. When I walk into the central hall I see the band signing and taking pictures with fans in full regalia. That is awesome! 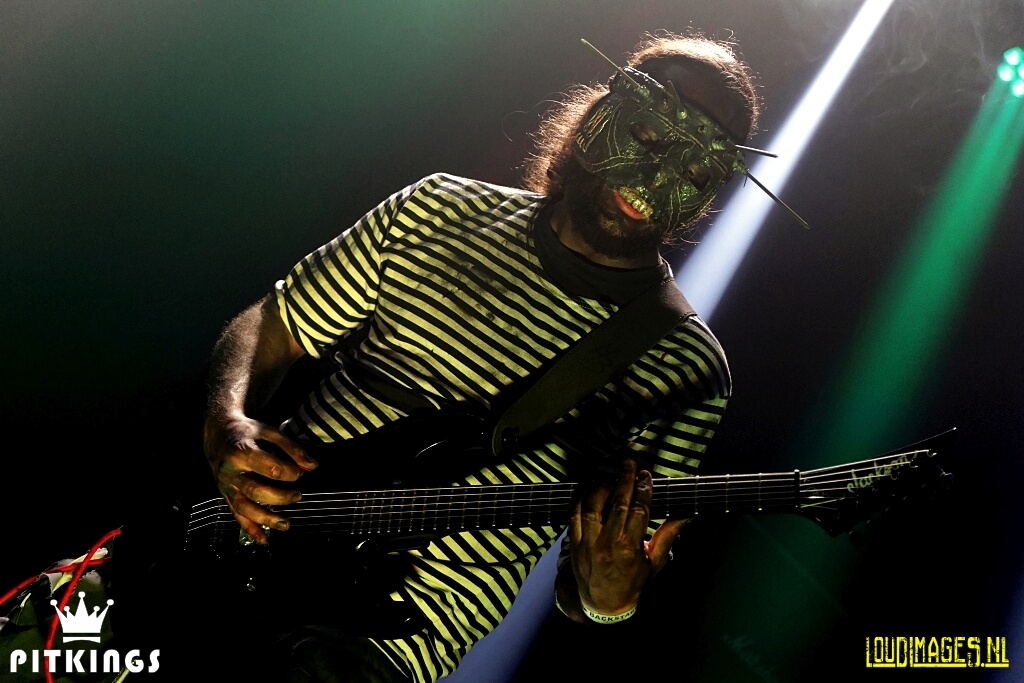 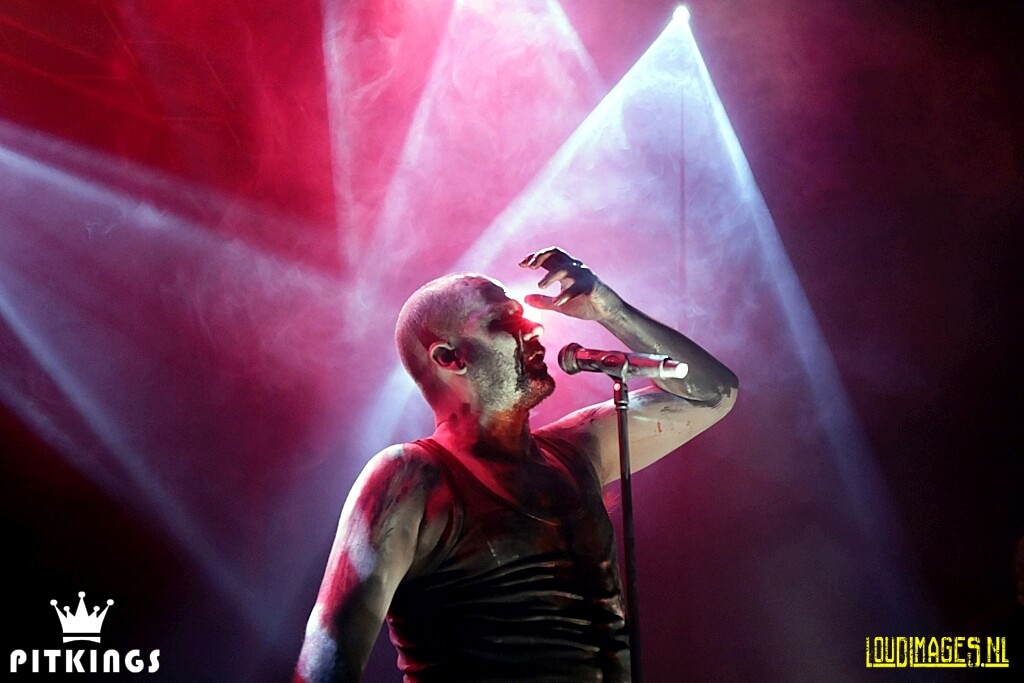 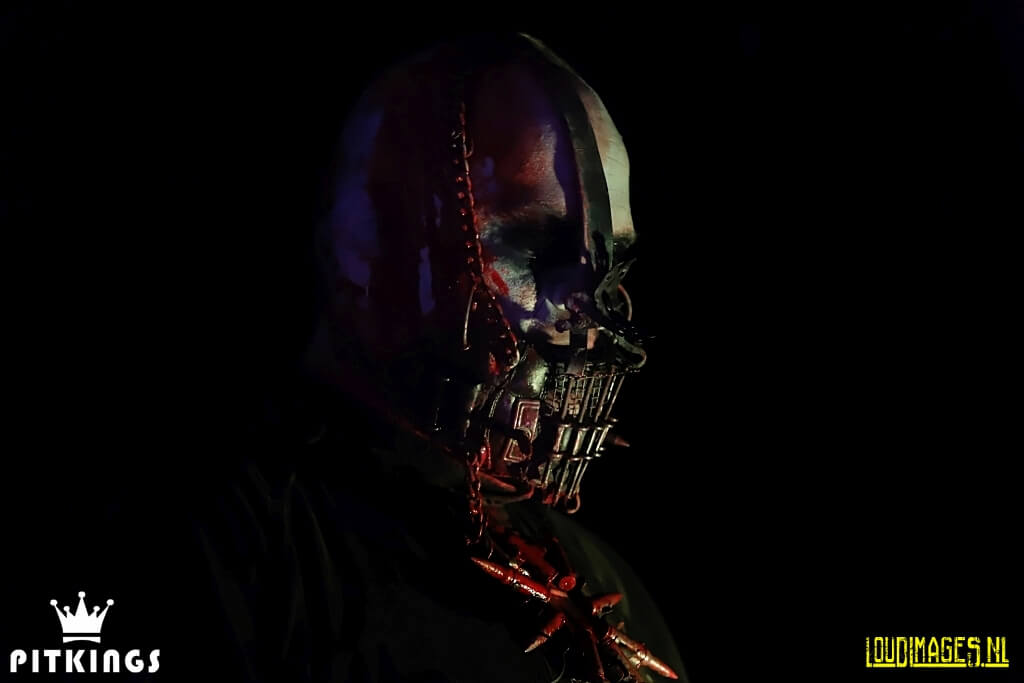 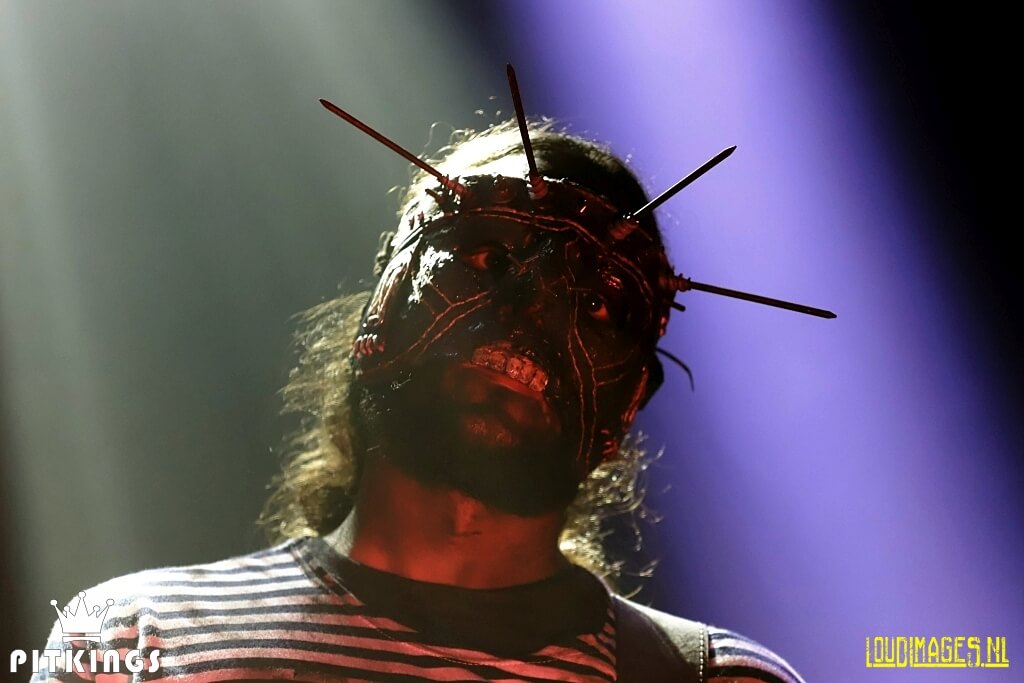 Thrashcan (NL)
There has to be one exception to the rule, but this isn’t a review; merely an observation. Thrashcan is not a tribute band, but plays a lot of different songs of different bands and they do that exceptionally well. They have a large following, that the small hall in front of the smaller stage is filled to the brim. And there is a pit; a large pit which is pretty wild at most of the times. I estimate it is too wild for me to go in in with my camera and I keep watching for a while on the site of the stage to see a band on fire and a crow who is happily lighting that fire and visa versa. I guess a lot of bands today are jealous of the crowd in front of Thrashcan: in numbers and in response!

Tankard (D)
Oh well… Tankard… My last encounter with this band at Pitfest 2018, Singer Gerre grabbed my camera a few times and shook it when I wanted to take a picture of him and he put his hair on my head, probably to compensate for my ultra short hairdo. This time the stage was a bit higher, so I thought I was safe from Gerre, but that was wishful thinking… The first close up of Gerre was, again, from his hand. Cheekily he walks a way smiling at me. This band has been around 36 years already and Gerre is proud that his band has never split up, change of line up or had a break.

It is striking the energy that is displayed. Not only the songs come at the people present like a machine gun, but on stage these old farts are running and jumping about the entire set! Singer Gerre has a nose for good looking girls. When he sees a good looking girl in the front row, he points at her and tells everyone present he knows her. When he asks her if she knows his name she nods, but Gerre tells everybody he know her name too. The girl looks puzzled and then Gerre shouts: Cerveza! The crowd laughs and cheers and the band starts the song “A girl called Cerveza” and it gets pretty messy in front of the stage.
Not only young girls are called upon the stage. At a time a not-the-youngest-girl-present is hoisted on the stage and Gerre is dancing with her ballroom style and gives her bottles of beer during the remainder of the show. Bass player Frank is walking multiple miles on the stage, while joking around with the front row fans. In the mean time, let’s not forget Tankard is playing fast thrash while having a blast. Much to soon this set is over. Tankard is something else… literally and figuratively. 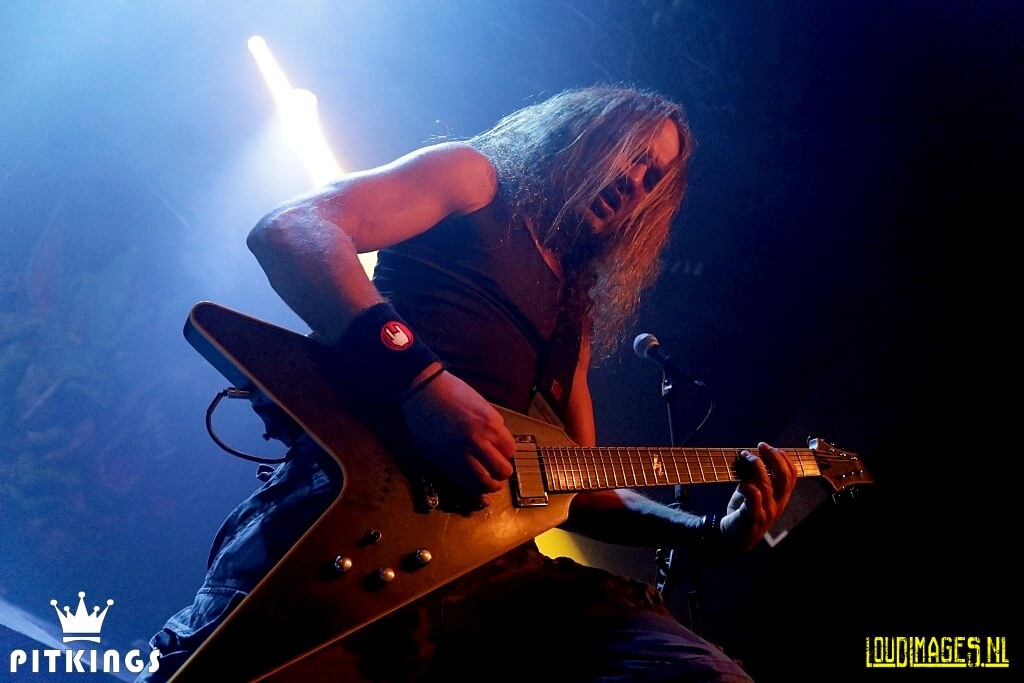 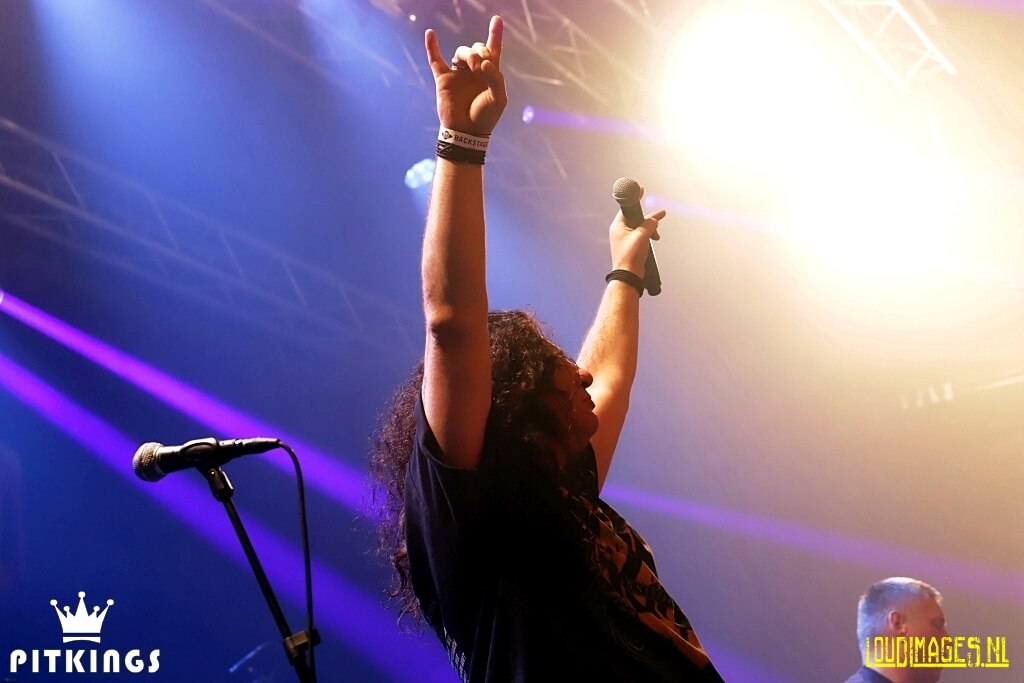 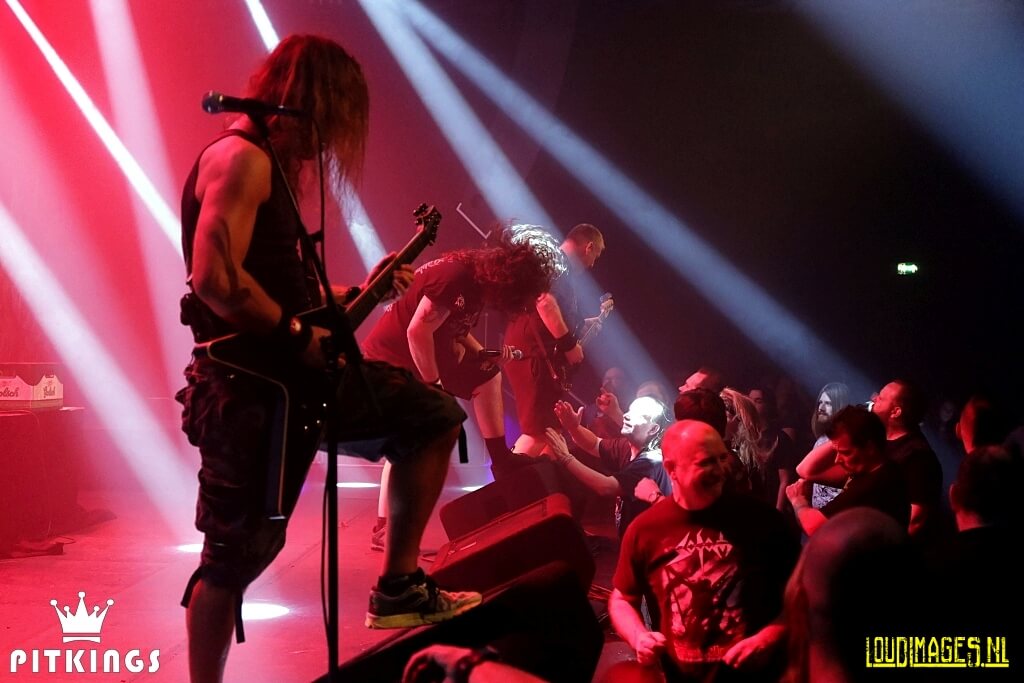 Entombed A.D. (SWE)
It takes the crew of Entombed A.D. long to do the soundcheck and the when the band starts it’s more than half an hour late according to the time table and some people are leaving after just 15 minutes. Pity, because Entombed is playing great again. Singer Lars Göran Petrov excuses himself and the band for being late, but they had a good excuse; They found a bottle of captain Morgan and they had to finish it. A laughter fills the room, but I wouldn’t be surprised if it had some part of truth in it! That bolttle and a large bottle of (probably) hard liquor he got from one of the brewers of Happy Face made him having a blast on stage. The band is on fire and every gig they do, it is like clockwork. Entombed A.D. is a great worthy headliner and they live up to their status this evening. Matching their performance in Apeldoorn a few weeks back, it is solid as rock again and the remaining audience is going mental. 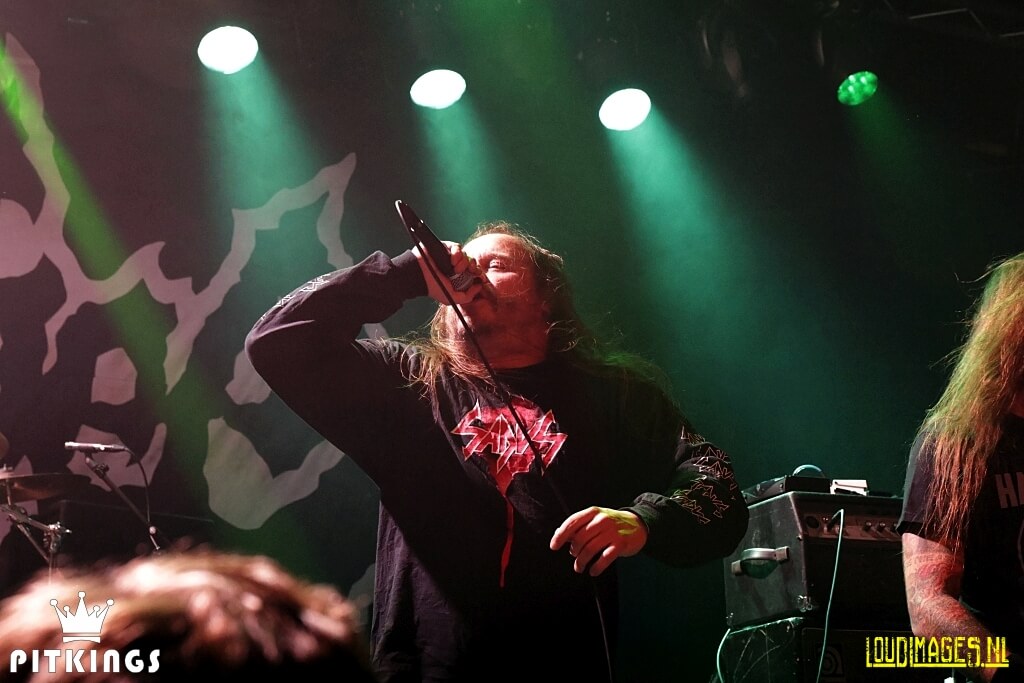 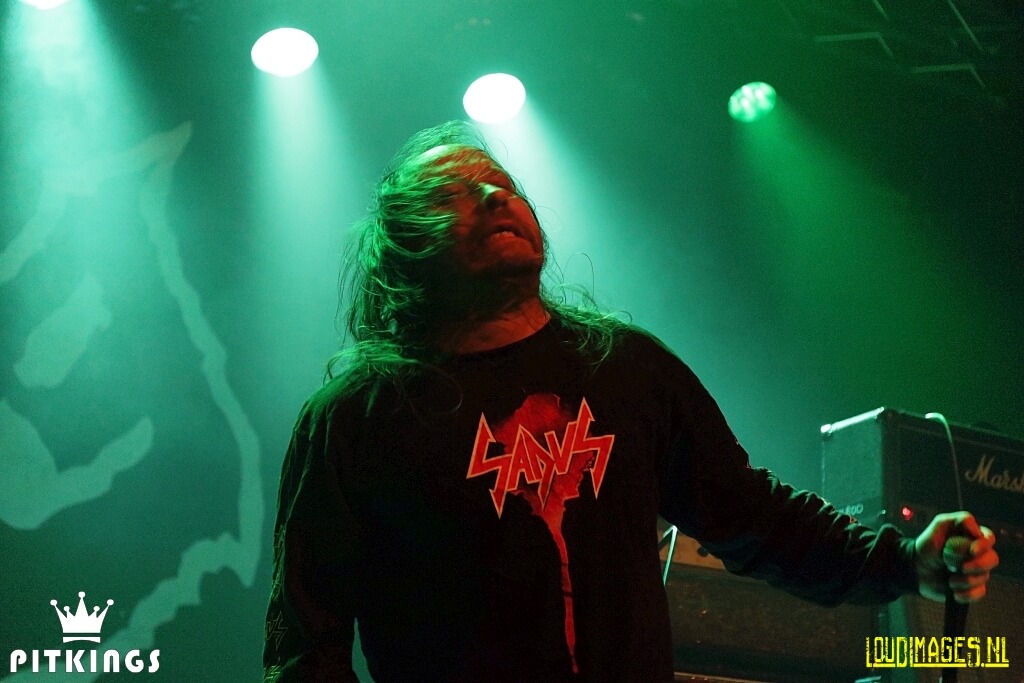 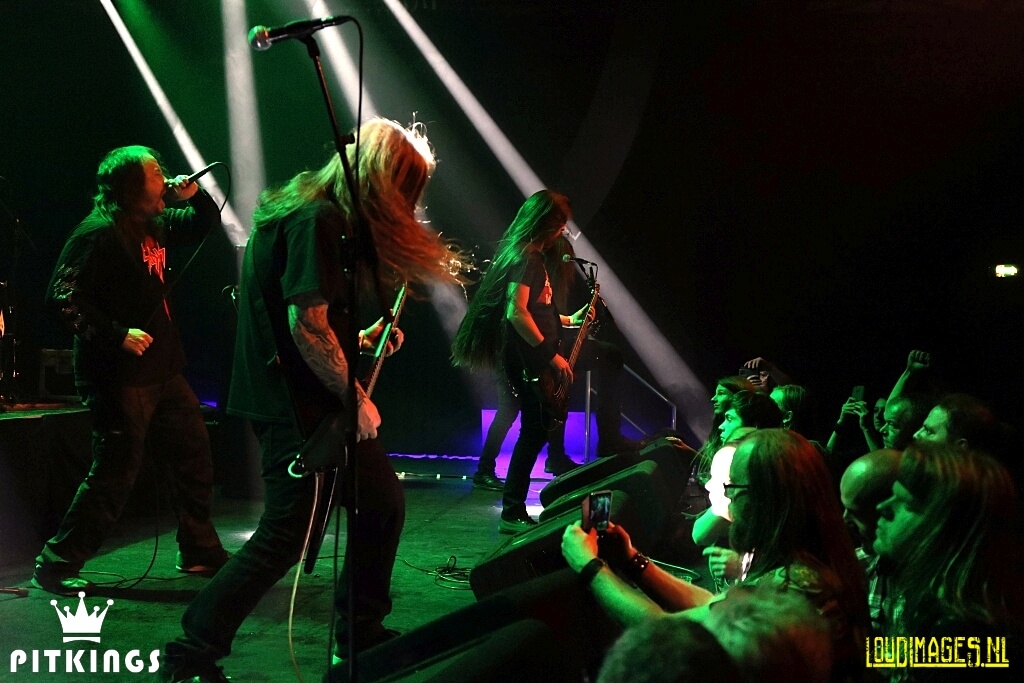 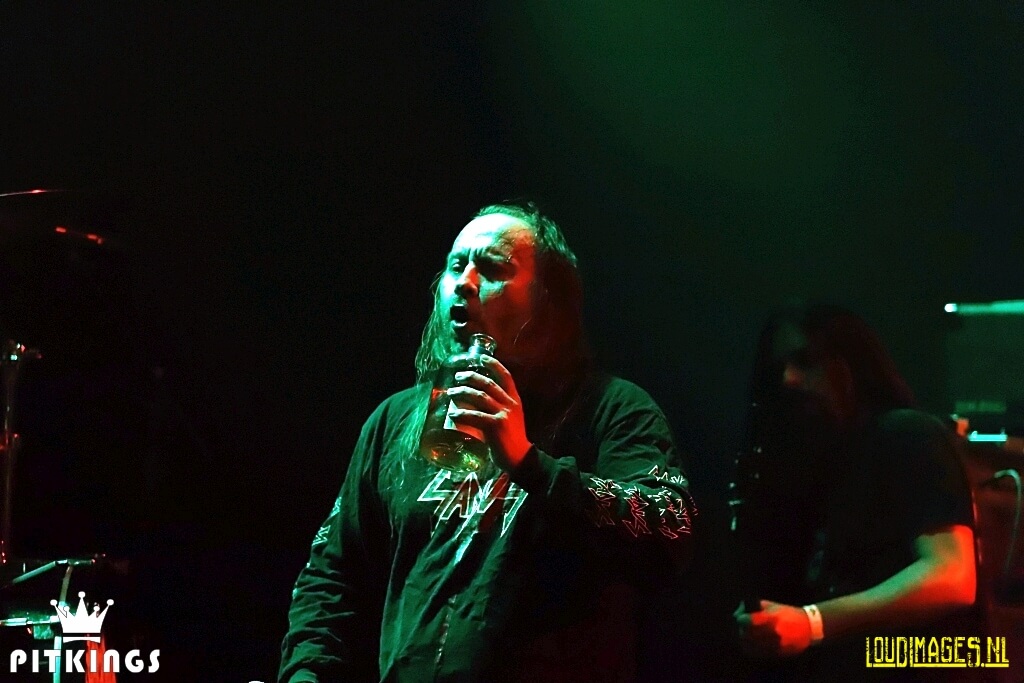 Conclusion
Although not sold out, Metal on Metal was a great festival; the second in a row. It was great to see Izegrim back on the stage again and With Ost+Front and Tankard there was enough entertainment. Musically it was mighty. There was not a band under performing and the only real issues with the sound were during The Heritance and that was too bad for them, but it was fixed relatively fast. I am looking forward to the 2019th edition!