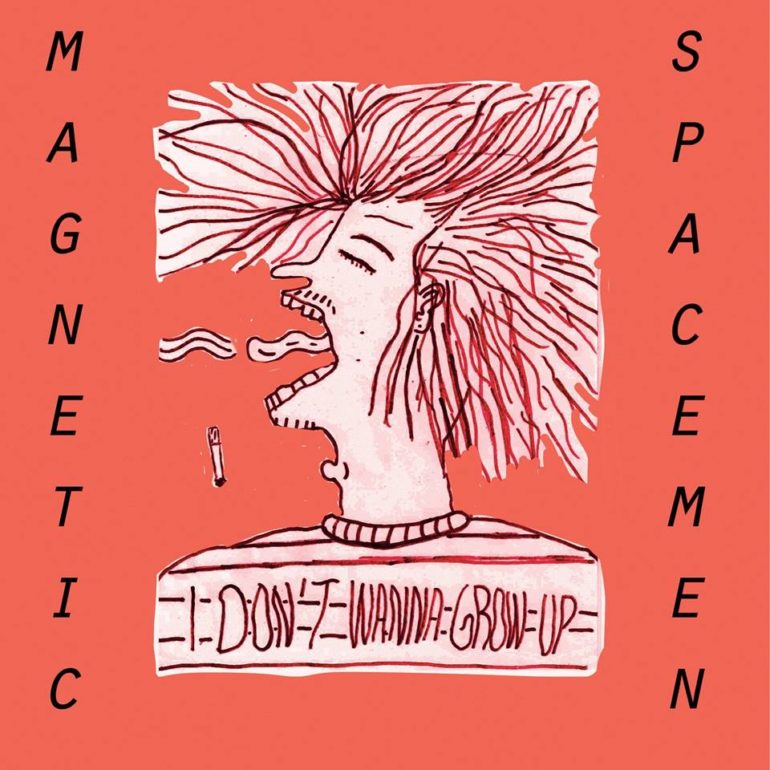 The Dutch garage (speed)rock band Magnetic Spacemen is going fast. Just compare those guys with Nashville Pussy, Peter Pan Speedrock and John Coffey. Actually they already played with those three bands and they also performed at Zwarte Cross and Stonerock Festival. On the 9th of October, 2016 they released their debut album ‘I Don’t Wanna Grow Up’ at Hedon, Zwolle. It’s the successor of their EP ‘Babydoll’, which was released in 2014.

This album contains 9 short songs and short songs ask for a short review! From the start to the end I’m really impressed of the raw sound, the energy and the fast songs they bring. For me this is Ramones on full speed with raw hooks. Dirty music with the ‘out of tune’ NOFX vocals. The album comes as a CD, on vinyl and also as an old school cassette. This old school feeling is something that fits in with the band, because their music is made for it.

For me the song ‘Seafood’ is the most interesting and best song on this album. Just call it garage-punk-n-roll with melodic blues solos and made to sing a long with. It’s got it all! The rest of the songs are to be honest quit the same. Good songs, but not enough variety and surprises. Does that mean I’m not satisfied with this album? Not at all! I think they are a pure live band and the music on this album is killing you during live shows!

If you like short, hard, raw and straight to the point songs, just listen to Magnetic Spacemen. Just play it loud and you won’t be disappointed at all!