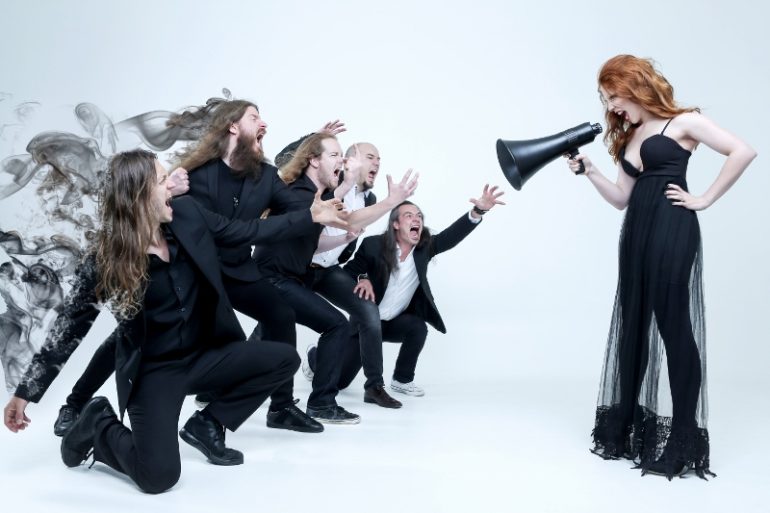 The Dutch symphonic metal band Epica released their eighth studio album ‘The Holographic Principle’ on September 30th, 2016. Raymond had a chat with Simone Simons and Mark Jansen about this new album and the whole recording process.

Congrats with your new album ‘The Holographic Principle’. Who brought up the name of this new album?
Simone: Laughs… Mark did.
Mark: I’m the one! I was thinking of an title that must trigger and where we can put all our creativity into. The theory is all about VR (virtual reality) and that was the starting point of our writing process.

And where did the theme about virtual reality come from?
Mark: Well, first of all it’s a fascinating thing, because it brings you to another place. It already works very well, but you have to realize that this is just the beginning. Simone tried it ones and was very impressed.
Simone: I tested the oculus rift from a young guy in USA who started with it for his company. Now every major company is doing it! It will make more big steps soon.

Will VR be on the same level of let’s say the Matrix in about 5 years?
Simone: Yes, we will. This was also one of the themes issued in one of the lyrics on the album. Also the movie ‘Inception‘ was in important influence for us, because the real life and the virtual world is mixed very well together and manipulates you. So that makes it a really interesting theme to write songs about.
Mark: I think VR in total is going through an interesting development, especially when you hardly can’t see the difference between what’s real and what’s virtual. That’s the point were we have some serious things going on!

For this album the band recorded the orchestral parts live with an orchestra. Was the music all written before recording those parts? Or did you change some music afterwards?
Mark: Absolutely everything is taken care of before we started, because it all had to be one at the end of the process. We wrote it as a team and afterwards the orchestra get the music on paper and we played it all together. It was difficult and it did take quite some time and effort. But Joost van den Broek did a real good job as producer of this album. I really have no idea where he got the time from. Haha…
Simone: I think he picked some hours of a parallel universe! Haha…
Mark: I thinks so. Because the music editing and mixing process is difficult and every music lover knows how much work it is to make one song out of this puzzle.

With your music you bring metal and the classical orchestra together. To the listeners that’s surreal, how did you do that?
Mark: They are melting together!
Simone: It’s not only metal, but also classical sounds in the music which complete each other in many ways. Our music is driven on symphonic music, so it always was and will be part of our Epica sound. I personal love classical music and metal, to combine it is even better.

Did you get inspiration from bands like Metallica and Kiss, who also recorded an album with an orchestra?
Simone: As a teenager I really loved S&M from Metallica! The music and the songs were just epic at the time.
Mark: The only drawback with bands like Metallica is, that the music is written for the band itself. When you use a orchestra afterwards, you have to figure out things before that will help making the music better. Our music was written with the input and feedback of the orchestra before we recorded the whole thing.

Inbetween all the recording sessions, the band also did many show. How did you manage the band and the orchestra played together regarding the recordings?
Mark: Well, there were some moments that Joost (producer) was recording with the orchestra while we were on tour. Some things have been done separately, because you can’t simply record everything together. It’s heavy to go from studio mode to live mode, but with Joost on our side it was manageable!

Coen Janssen wrote in the Epica biography: ‘for this album we found our definitive sound’. What’s the biggest differences between this album and previous albums?
Mark: I personal think that ‘definitive’ is a big statement. You always try to give all you can and find different sounds, because you can’t do a life time with the same sound. You never know when it’s your last album or how much there will follow with that same sound. I think Coen means that it all fell in place right now and the fans react very positive to our material.

Last question. What were the key focus points on this album?
Simone: This time you will hear more guitars and heavy riffs, because we basically are a metal band!