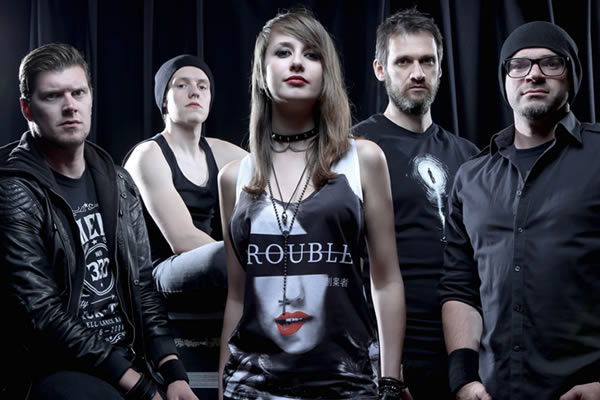 The female fronted modern metal band Spoil Engine is original from Belgium and was founded in 2004. In 2011 the Dutch drummer Matthijs Quaars joined the band and in 2014 the Dutch vocalist Iris Goessens replaced singer Niek Tournois, making Spoil Engine a Dutch/Belgian metal band. They’ve already released 3 full albums and 2 singles which appeared in the national charts, but this was all with the previous vocalist Niek. In May 2017 the first full lenght album ‘Stromsleeper’ with Iris Goessens on vocals will be released. Time to have a chat with Iris about all the new things coming up.

Can you describe your band in short to people who are not familiar with Spoil Engine?
Spoil Engine is a 5 piece metal band with 2 band members from the Netherlands and 3 from Belgium. The band is signed by Arising Empire/Nuclear Blast since the upcoming album ‘Stormsleeper’, which will be released in May, 2017. We already did supports for bands like Arch Enemy, Motorhead and Megadeth and also played at festivals like Graspop and Pukkelpop.

And which metal genre do you play?
We always try to avoid the metal-genre discussion. Call it whatever you want, our goal is to bring modern heavy stuff that’s enjoyable with a live performance.

You are the new (female) vocalist of the band since 2014 and replaced the male vocalist Niek. Was it hard to replace him?
Not that hard. From the start it was clear that Spoil Engine wanted to reinvent itself with me. So I did not feel some kind of pressure that I had to beat him in some way. I just needed to be different. What wasn’t that difficult, because I do not have a beard and have a complete different vocal style/sound.

Did you have to prove youself?
I had to audition for the band. That included writing a demo and join them in the studio to try some recordings. When I officially joined the band I felt accepted from the first moment. They helped me grow. But without much pressure.

Did things change when you joined the band? Other goals? Different focus points?
At this moment we’re with a great line up in the band. Everyone wants to go for it for 100% and go on tour. That’s something Spoil Engine missed in the past. This is the first time the band will tour through Europe.

The new album ‘Stormsleeper’ is coming up in May. What can we expect?
Loud modern heavy metal! In 2015 we released the EP ‘Stormsleeper’ and with 4 new songs we made the album complete. So even when you already have the EP, it’s worth checking out the full album!

You use the same title for the album an the EP? Why?
We really liked this title and Arising Empire/Nuclear Blast did also. And let’s face it: we sold 90% of our EP’s in the Netherlands and Belgium. With the full album we will go worldwide. The label really liked the “old” songs, so they told us we just needed to add 4 new songs for a full album.

How is the writing process for this new album going? Who is doing what?
Most of the writing process happens online. The other band members live 3 hours away from me, so we use every technical possibility there is at the moment. The writing process starts with me and the guitar players. They send me a (short) piece of music and I sing over it. If it works we start building a song around it. It needs to be finished for at least 90% before we try it in the rehearsal room.

Graspop, Pukkelpop, support act of Volbeat and a signed contract at Nuclear Blast. You do a lot to succeed, but the the ‘big’ breakthrough isn’t still there. How come?
You never know when or if a break through is gonna happen. Although we had some special circumstances last year… The EP wasn’t on Spotify or some other online platform. So we only had 2 singles online for a very long time. But even with that we were invited to play Graspop again. Now we need the album to be out in the open, so everyone can hear it. That will happen May 5th. Another thing what needs to happen is an international tour. That’s what we’re gonna do this summer with Prong. So we’re on track and excited for what’s to come!

Where do you think your popularity is coming from?
As a 21 century band it’s just not enough to make a good record. Think about your visuals, your show, your branding, marketing and more. You need everything to fit 100% together. We’re constantly working on all the aspects of the band and always try to improve everything we do. If things can be done better, we’ll throw the old stuff away and start again if that’s what needs to happen. For example: The final artwork for our album (made by Heilemania who also did some work for Epica, Legion of the damned and Kreator) wasn’t the first artwork we received. We worked with another artist first. That wasn’t bad, but it did not feel right either. So we decided to start all over again. Sometimes it costs more time and patience, but in the end we want to deliver the best we can.

There are a lot of metal bands nowadays. What are you doing to be different and original?
We just keep doing our thing. It’s not a competition in our opinion. Otherwise we would be doing sports 😉

And what about 5 years? Do you have some plans and ambitions?
This year our focus will be on touring through Europe. Part of it will be together with Prong this summer, so that’s really cool. We also play some international festivals like Summer Breeze. After that we want to grab every opportunity that comes our way. We have a great team working with us, so we hope we can get as far as we can get.

My last question as usual: what’s your advice to young starting heavy bands?
Play as much as you can. Maybe even better: Play together. Let the world know you exist and never stop improving yourself.