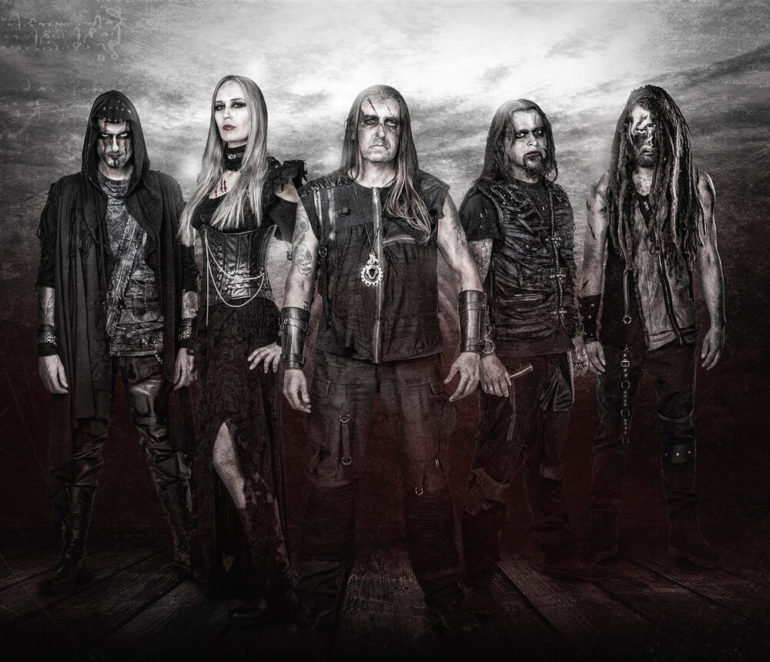 The Dutch epic death/black metallers of Bleeding Gods will release their upcoming concept album »Dodekathlon« on January 12th, 2018 via Nuclear Blast. Yes, that’s Nuclear Blast! In October this year Bleeding Gods announced the signing of a worldwide deal with this mighty metal record label. After they released their EP ‘Blood Symphony’ in 2013 and their debut album ‘Shepherd of Souls’ in 2015, it’s now time for the next step and adventure. I talked with founder and guitar player Ramon Ploeg about Nuclear Blast, their upcoming album and the future.

First of all: congrats! You joined the Nuclear Blast family! What happened?
Thank you! It really feels like family too. In 2016 we’ve send a brand new promo CD to Nuclear Blast and they were surprised of the step forward Bleeding Gods took the last couple of years. So, we stayed in touch. When our end product was finished in September 2017 we got a contract offer. Also the UK and USA offices were very enthusiastic, so it turned out to have a worldwide deal know.

What was the main reason Nuclear Blast choose Bleeding Gods to sign?
I don’t know the main reason, because there were several I think. The whole office in the EU, UK and USA liked the band. Not only the music, but the complete package we had delivered. The album, artwork, live reviews, photos, etc. And the growth of the band was important too I think.

Bleeding Gods is around since 2012. What are the biggest changes between the period before signing Nuclear Blast and after signing?
Actually the start was in 2013. The biggest change is the music itself. We started with playing some thrashy death metal. Now, almost 5 years later it has changed into epic death/black metal. The tracks are more musically now, not only fast and pure death metal. We are musicians and want to make music, not only death metal.

I listened to your new album Dodekathlon. Awesome and epic! Can you describe the album?
Thank you, really appreciate it! We are very happy with the end result. The album is a concept album which contains 12 tracks and describes the complete story of the myth of ‘The twelve labours of Hercules’. Every track represents a labour in music and lyrics and the whole story comes together with all 12 all tracks. Some tracks have a epic intro, others some classical guitar or spoken words. I think the album turned out pretty diversified.

In my opinion it’s not typical death metal. How would you call it yourself?
Epic death/black metal. Epic because of all the orchestral and piano parts, and riff wise it still is death metal, but with some black riff influences in it too. Martin Powell (former Cradle of Filth, Anathema, My Dying Bride) is responsible for all the keyboard, piano and orchestra parts.

Was the writing of the album already begun before signing Nuclear Blast?
Yes. I had the first riff ideas already in 2014 for this record. A while ago I found an old video of myself where I was playing the riff of Inhuman Humiliation. That video was from 2015. But we took our time. In between there also was a lineup change. So in 2016 the pre production was finished and we recorded 3 tracks for the promo. Eventually we started the Dodekathlon recordings somewhere in June 2017. So it all took about 2,5 years of writing and pre production demo’s.

How is the writing process going? All the band members involved or one main songwriter?
Well, so far I wrote all the complete skeletons of the tracks of all the demo’s, albums and promo. It all starts with ideas and skeletons. If all those tracks are finished I e-mail it to the rest of the band to get their opinions. If I have the green light, Rutger is going to write second guitar parts and solo’s, Daan his drum lines, Gea her bass lines and then it’s Mark’s turn for the vocal lines and lyrics. This way we got a complete image of if a track could work or not. Finally in the studio it could be that we are changing some riffs, solos, vocal lines or whatever. At the end we all send it over to the UK where Martin Powell is doing his magic.

I couldn’t find any upcoming shows online. What about touring in 2017 and 2018? Big plans? Any surprises?
Yes, working on it as we speak. The planning is extensive touring in 2018 to promote Dodekathlon on festivals and venues of course. And because it’s a worldwide release we also hope to do this worldwide. We are also planning an album release party. Keep an eye on our Facebook-page and website for all tourdates.

I can imagine that there are a lot of new things coming up. What are the main goals for let’s say the next 2 years?
Extensive touring and promoting the album. Expand our fan base and writing the successor of Dodekathlon. So it will be very busy years for the band, that’s a good thing!

There are a lot of metal bands nowadays. What are you doing to be different and original?
Yes, there a lot of metal bands and a lot of them are having something special. Nowadays it’s difficult to stand out or be original. We like to do our own thing, but mostly our live shows will be special. Can’t tell you exactly what we are going to do, but hopefully we are going to stand out a little bit and get noticed more than we are already do.

My last regular question as usual: what’s your advice to young starting metal bands?
Have fun and enjoy it. And if you want to get signed by a big or major label: work your ass off because nothing will get for free. Go on tours so people get to know you and built an own fan base. Take care of the promotion from your band; making a album quality demo, good band photos, nice artwork etc. Send it over to some labels and wait. If they are interested, they will contact you, you don’t contact them about getting signed. Eventually, you will enjoy the ride!

Thanks for your time. See you soon on the road!