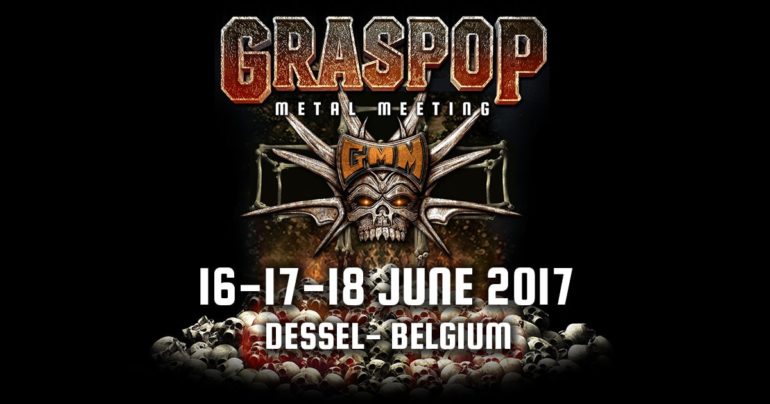 Yes! Graspop 2017 is coming closer and closer! From 15 to 18 June a huge package of 119 metal bands are visiting the Belgian meadows. A perfect moment to give you my 10 personal suggestions, in case you’re still doubting which bands you have to check. Of course I mentioned the Dutch bands who are playing, because otherwise there are some people kicking my ass! This list is of course my personal opinion, so don’t blame me afterwards if you didn’t like the show(s)!

Born From Pain (NL)
Thursday (June 15) | 21:15 – 22:05
On the opening night Graspop billed one of the leading acts from the European hardcore scene: Born From Pain. This Dutch hardcore ensemble has been around for quite a few years – twenty to be exact – but their passion and power have withstood the test of time. Born from Pain hasn’t forgotten what a chunky groove sounds like, the riffs are as tight as a duck’s arse and their signature breakdowns are brutal and uncompromising.

Epica (NL)
Friday (June 16) | 20:15 – 21:15
With seven appearances to date it’s safe to say that Dutch symphonic metal band Epica are Graspop regulars. Their sixth album ‘The Quantum Enigma’ (2014) bears testament to the band’s versatility with a mixture of screaming guitars, operatic vocals, brutal grunts, ferocious drums and orchestral arrangements. The album took Epica’s blend of symphonic metal, death metal and gothic metal to new heights and the same can be said of their brand-new album ‘The Holographic Principle’ (2016). Simone Simons’ voice has clearly matured over the years and she is undeniable one of the leading ladies of metal.

Rammstein (GER)
Friday (June 16) | 00:00 – 01:30
The Germans are coming! For 22 years, the hard-hitting German collective has been forging one worldwide hit after the other. Their international breakthrough came in 1997 when “Rammstein” and “Heirate mich” were included on the soundtrack of David Lynch’s Lost Highway. Today they are still a force to be reckoned with on the rock and metal scene thanks to numerous standout tracks including “Sonne”, “Ich Will” and “Feuer Frei”. When Till Lindemann, Richard Kruspe, Paul Landers, Oliver Riedel, Christian Lorenz and Christoph Schneider mount the stage all bets are off and it’s all systems go: theatrical costumes, amazing pyrotechnics, provocative lyrics and booming guitars blend into one unique concert experience.

Baroness (USA)
Saturday (June 17) | 14:00 – 14:45
Hailing from Savannah, the sludge capital of the world, these Virginia natives released their full-length debut ‘Red’ in 2007 in a production by Kylesa’s Philip Cope. Heavy riffs, abstract arrangements, ambient melodies and memorable solos blend into a wonderful atmospheric whole. Sometimes likened to label mates Mastodon, Baroness nonetheless evolved in a different direction on ‘Yellow & Green’ (2012). Changing course in a way that some fans of their doom/sludgecore beginnings might not appreciate, ‘Yellow & Green’ offers balls-to-the-wall hard rock, melodic and tight as a tourniquet, and counterbalanced by the more psychedelic, Queens of the Stone Age and Pink Floyd-esque tracks on ‘Green’. Just as frontman John Dyer Baizley’s paintings, Baroness’ music walks the line between delicate and brutal.

Deep Purple (UK)
Saturday (June 17) | 22:35 – 00:05
In the late 60s, this legendary band jumpstarted the British hard rock scene with the likes of Black Sabbath and Led Zeppelin. Meanwhile they’ve sold over 120 million albums worldwide and rock classics such as ‘Smoke on the Water’ and ‘Child in Time’ are firmly etched in the collective memories of generations of music lovers. Their 1968 debut ‘Shades of Deep Purple’ may be nearly half a century old but these founding fathers of hard rock are as relevant as ever. Come 17 June, Ian Gillan, Roger Glover, Steve Morse, Don Airey and drummer Ian Paice – the only constant in the band’s eight incarnations – will show why Deep Purple deserved to be inducted into the Rock and Roll Hall of Fame. Their new studio album, ‘inFinite’, is released in April, 2017.

Gojira (FR)
Saturday (June 17) | 17:50 – 18:50
The flag bearers of French (extreme) metal are a band with a Message. Concerned about man’s treatment of the planet, they have allied themselves with the Sea Shepherds Conservation Society. Gojira is one of those bands that defies labelling thanks to a technically sophisticated approach that incorporates influences ranging from thrash and progressive metal to death metal and groove. Some have described Gojira as a hybrid of Morbid Angel and Voivod. Infusing their music with myriad twists and turns, tempo changes, well-timed breakdowns and interludes, they know just when to hold back and when to come out all guns blazing. Their Grammy-nominated sixth album ‘Magma’ (2016) has taken their popularity to new heights. A powerful and haunting eulogy to the Duplantier brothers’ recently departed mother, the album features more clean vocals than usual, a weapon they’ve used rather sparingly until now but which accentuates the emotional nature of the tracks.

Ministry (USA)
Saturday (June 17) | 21:00 – 22:00
These industrial metal pioneers need no introduction. Founded in 1981 and headed by sole remaining founder Al Jourgensen, they’ve been at the forefront of industrial metal for over three decades. In 2008, Ministry announced their dissolution and that year Graspop was one of their stops on the ‘C-U-La Tour’. Ministry reformed three years later but fate struck them a cruel blow when longtime guitarist and Al Jourgensen’s best friend Mike Scaccia died on stage of a heart attack. Shortly before, Scaccia had made a key contribution to the band’s last album to date, ‘From Beer to Eternity’ (2013). Another hiatus followed but like a cat with nine lives they are back once again – and Jourgensen & Co are more outraged than ever. Let’s hope the new American president will fuel Jourgensen’s political anger to the point where Ministry drops another record.

The Monolith Deathcult (NL)
Sunday (June 18) | 12:00 – 12:40
Tetragrammaton, The Monolith Deathcult’s fourth studio album, was undoubtedly one of the most exciting new albums of 2013. Their unique combination of ultrabrutal death, grind, industrial and symphonic elements is suffused with electronic freakiness and industrial samples, resulting in a versatile and epic monster that knocks you senseless. Just think Nile, Ministry, Strapping Young Lad and early Fear Factory. To top it all off, the intelligent and sarcastic lyrics don’t pull any punches and deal with such topics as genocide and dictatorship. Whoever said that metal lacks a sense of humour? Their new EP ‘Bloodcvlts’ is yet another slab of spine-crushing metal that references the likes of Cannibal Corpse, Nile, Death and Napalm Death. Once you get used to the intensity, you’ll be hooked in no time!

The Charm The Fury (NL)
Sunday (June 18) | 12:20 – 13:00
In spite of the fact that lead singer Caroline Westendorp embodies both characteristics the band name refers to, the Amsterdam five-piece metal band The Charm The Fury is more fury than charm on stage. They deliver a brutal combination of metal and hardcore centred around Westendorp’s voice. Alternating effortlessly between clean melodic vocals and harsh grunts, she has the range to compete with the best female vocalists out there. The music mirrors that versatility, ranging from soothing melodies to boot-to-throat metalcore. The Charm The Fury is inspired by acts such as Underoath, Architects and Every Time I Die but their debut ‘A Shade of My Former Self’ made it clear that the band is crafting its very own brand of metalcore that should appeal to Slipknot and Pantera fans.

Suicidal Tendencies (USA)
Sunday (June 18) | 20:20 – 21:10
He’s back! The suicidal maniac! Crossover thrash legends Suicidal Tendencies are coming to town this summer. Their eponymous 1983 debut started a revolution by combining hardcore verses with slower thrash choruses. ‘Suicidal Tendencies’ jumpstarted their career but on ‘Join the Army’ (1987) and ‘How Will I Laugh Tomorrow When I Can’t Even Smile Today’ (1988) they gravitated towards a thrashier overall sound although the hardcore roots remained palpable. Now fast-forward to 2016, with the hiring of three new band members including legendary ex-Slayer drummer Dave Lombardo, and the release of ‘World Gone Mad’. Expect political lyrics, Mike ‘Cyco Miko’ Muir’s inimitable delivery, ripping solos and great leads, catchy bass lines and to top it all off, Lombardo’s punk-inspired style that adds a dimension to the music that early fans will definitely appreciate. They’ve been racking up rave reviews so don’t miss out!