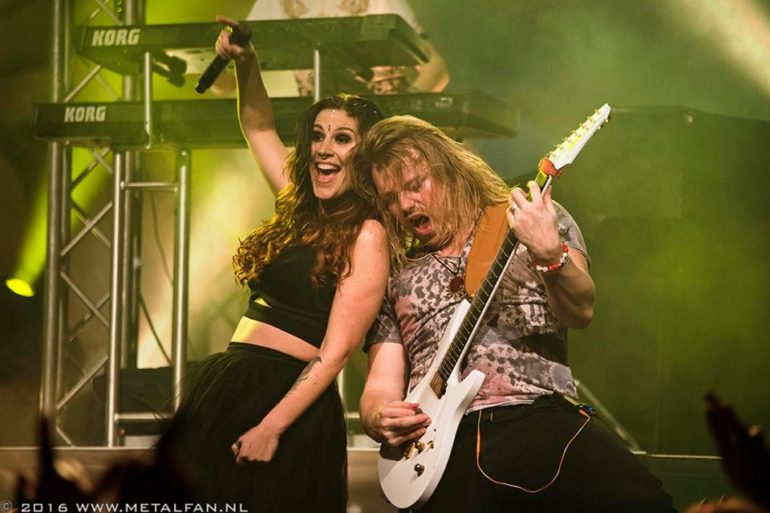 January 29, 2016 | Patronaat, Haarlem – The Dutch symphonic metal band Delain celebrates their 10th anniversary in 2016 and starts the year with a special sold-out show in Patronaat. They finish their ‘The Human Contradiction’-tour with a show called ‘SuckerPunch’. They promise us special effects, special guest-musicians and lots of music including brand new songs. Support act this evening is the Amsterdam based female fronted metalcore band The Charm The Fury. A big thanks to Tonnie Westerbeke (Metalfan.nl) for sharing the very nice pictures!

The Charm The Fury
When I enter Patronaat, The Charm The Fury is already playing for about 15 minutes. The venue is packed with people in Delain t-shirts and I find myself a nice spot in the back of the room, near the bar. There’s a large variety in age: from 16 till 60 and also men and women are mixed very well. I saw The Charm The Fury many times before and also this time they do what they do best: play tight metalcore including melodic parts and female screaming from Caroline. The second last song they play is from their upcoming album, to be released in 2017. A little bit a slow song, but very melodic including clean vocals. I like it! For me The Charm The Fury is a fresh and energetic band, but this time I miss the real surprises and action I used to see from them. It seems a little flat and predictable. Perhaps it has to do with the fact that this is not really kind the audience they are used to? Delain
During the change over the Dutch ‘high-society-specialist’ Jort Kelder is popping in with a camera crew. He stands next to me in his business suit and says: “Perhaps I’m a little bit overdressed”. I can appreciate that and he moves on into the crowd. After a change over it’s time for the band the audience waited for: Delain. After a symphonic intro the curtains fall down one by one and the artists appear in the spotlight, playing the brand new song ‘Suckerpunch’ for the first time live! A nice opening! The stage looks awesome with the keyboards and drums on a higher level on the back of the stage and a nice video wall.

The vocals of Charlotte Wessles are in very good shape and also the wall of music is tuned very well. During the show there are a few guest musicians that appear on stage, like Caroline Westendorp from ‘The Charm The Fury’ and George Oosthoek from ‘Orphanage‘. The most impressive contribution came from Maaike Peters on cello. Together with Martijn on (a real) piano and Charlotte on vocals, they played a magnificent version of the song ‘Scarlet’. A nice moment of rest in a show packed with heavy songs, mostly from the albums ‘The Human Contradiction’ and ‘We Are The Others’. During the song ‘The Gathering’ confetti is flying through the air into the audience, just to show us that this is an extended show. They end the show with their most popular song ‘We Are The Others’ followed by a big thank you of the band members.

The audience (including Italians with an Italian flag and a head-banging Jort Kelder with a wig) is very greedy and claps and cheers on every movement and sound. Delain is a band that’s playing honest, real and pure music without acting. They are who they are and that’s what you see on stage. I’m not a big symphonic metal fan, but I must say I’m very impressed in what I saw this evening. This is definitely the best symphonic metal band that the Netherlands offers us at this moment. I honestly can’t believe that such music is underexposed in our own country. Hopefully Jort Kelder can change that for us and them! Setlist:
1. Suckerpunch
2. Get the Devil Out of Me
3. Army of Dolls
4. Lullaby
5. Stardust
6. Milk and Honey
7. Scarlet (With Martijn on piano and Maaike Peters on Cello, live debut)
8. April Rain
9. Sleepwalkers Dream
10. The Tragedy of the Commons (With Caroline Westendorp from The Charm The Fury)
11. Here Come the Vultures
12. Don’t Let Go
13. Turn the Lights Out
14. Silhouette of a Dancer (With George Oosthoek and Maaike Peters on Cello)
15. The Gathering
16. Not Enough