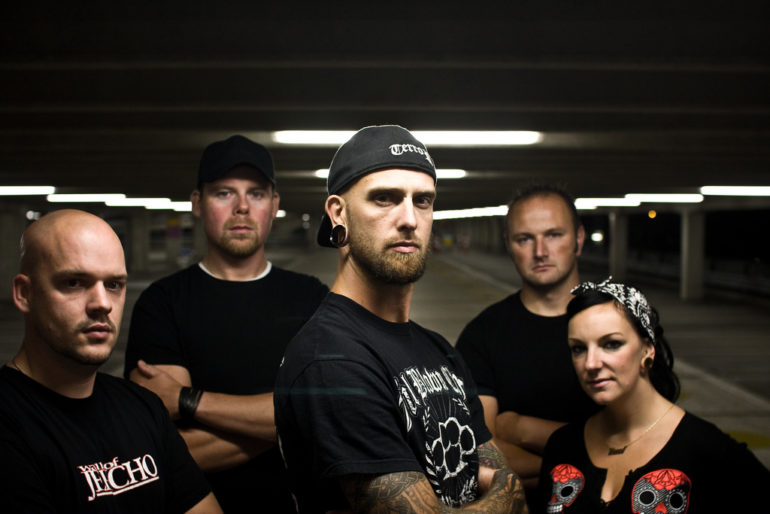 The metal/hardcore band Bring On The Bloodshed is a 5 piece band from the Amsterdam area. Their new album ‘Amongst The Ruins’ shows us that they have found the perfect combination between hardcore and metal. Like they say: “Our music that is straight to your face, tougher than a fighting Spartan, heavier than a bulldozer, louder than a chainsaw!”. The band is formed in 2008 and they hit the stages in a steady line up since 2011. I talked with Rogier (vocals) and Maggy (bass) about the new album, touring and the future, just before their album release party at Patronaat Haarlem.

You just released your brand new album ‘Amongst The Ruins’. What can you tell us about it?
Well, the most important thing is that we changed our style a little bit comparing it with our previous album ‘Dark Clouds’. That was a hardcore driven album and with ‘Amongst The Ruins’ we moved more to the death/thrash metal sound.

What was the main reason why you switched from hardcore to death/thrash metal?
The most important reason is the steady line-up we’ve got since 2012 and another reason is that we wanted to sound more aggressive. We are basically all big death metal fans, so that drove us also the metal side. So this new album contains influences of death/thrash metal and maybe we also became a bit more progressive on this album. On the other hand, you can still hear some hardcore tunes in the songs and it still sounds like ‘Bring On The Bloodshed’. So basically there’s a thin line between our previous album ‘Dark Clouds’ and this new album. We don’t want to go with the flow and sound completely different on every album, but stay true to our own sound.

How long did the song writing and recording process of this new album take?
We started in 2014 with the song writing and in the beginning of 2015 we started with the recording sessions. Then unfortunately one of the band members his father passed away, so we decided to slow down the whole process a little bit. The recording studio ‘Double Impact’ totally understood the whole situation and it was no problem to change dates.

Did you record all the instruments at once or separated?
Because of this incident we also changed our way of recording, because in first place we wanted to record everything at once in one package. Now we recorded almost everything separated from each other on different days. So we started with the recording of the drums and bass, then a few weeks later the guitars and after a month the vocals. So for Maggy (bass) it was a big surprise how it would sound and for me (Rogier, vocals) it wasn’t, because I already heard everything!

Was it not difficult to record everything separated from each other?
Yeah it was, because you miss some feedback from each other. We recorded the songs in our rehearsal studio as a demo, so we knew a little bit how the songs would sound. So, this was a totally different process then our previous album, but we are very happy with the result!

And the lyrics? They were all written before you started recording?
Yes, they were. Except the lyrics for the song ‘Ashes’. I (Rogier) wrote that one on the road to our studio in Friesland. Driving and writing at the same time. It’s a miracle I’m still alive! Haha… But I completed it when I arrived at the studio. And a nice side-note is, that this very fast written song, is in all the reviews the most liked one.

Where is the inspiration for the lyrics coming from?
Well, for example the passing away of the father of one of our band members. He died because of cancer and the song ‘Pain To Come’ is about the whole process before he died. What the impact is for that person and what it does with him to see his father dying. Another topic is what’s going on in the world at the moment and about religions and how I think about it. So most things are about things that happen in live and that are good topics to put all the aggression in. It’s no frustration, but I’m singing about my feelings. That’s the only way to let the vocals sound aggressive and raw.

Your new album ‘Amongst The Ruins’ sounds really ‘American’. What about that?
Well, nice that you say that. Some other journalists called our music ‘unDutch good’ and ‘American recording sound’, so your not the first one who noticed that. We recorded this album in the same studio as our previous album ‘Dark Clouds’, but I think it has to do with the recording and writing of the songs. We layered some guitars upon each other and used the two guitars more then before. That causes a fat sound in combination with our new ideas of riffs and vocals.

And had the studio a big impact in this ‘American sound’?
Yeah, definitely. The studio knew who we were and also knew what we wanted when we returned for our second production. They also knew what we wanted by listening to our preproduction. The two guys of the Double Impact Studio also play in hardcore bands (Manu Armata an 13 Steps), so they know how hardcore sounds. So they produced a metal album in a hardcore way for us.

Something else now. You are around for almost 8 years. What is the highlight in those past years for the band?
Well, first of all our own festival ‘Bring On The Bloodfest’. That’s is a big party for us by choosing the bands and having lots of fun. Another highlight for us is our gig with ‘Thy Art Is Murder’ at Volt in Sittard last year. A fully packed venue with a great audience. But also playing with Hatebreed at Patronaat, Haarlem and our gig at Vlamrock in Belgium were great shows and highlights for us.

What are the plans for 2016?
In 2016 we will be busy promoting our new album and in 2017 we hope to pick the benefits of it. We have some gigs confirmed for 2016, but we are also asking festivals and larger venues to play over there. So work is in progress. We also give a lot of interviews and magazine write about our new album, so it would be great if booking agents ask us because of that. Also a big thanks to Mike (de Coene) from ‘Hardlife Promotions’ who is doing the promotion for us. Hopefully that also brings us more shows, small tours, larger venues and more attention in the future.

And what about 5 years? Do you have some plans or dreams?
Well, the same venue we played as support act, but then as headliner. Haha… But serious, we hope that this new album is received so good, that it brings us to more venues, festivals and countries through Europe. And that we can play together with bigger bands would also be great. But the most important thing is that we still enjoy, have fun and are still together!

My last question as usual: what’s your advice to young starting heavy bands?
Stay together and have fun. Don’t give up after two years and after playing in pubs in front of 5 people for a few beers. Keep on trying, because it makes you stronger. And the longer you exist, the more people will accept you as a band. It’s hard working, because you are not playing at the large venues after one year. It takes time and lot’s of energy, but if you like what you do then you have to keep on going.