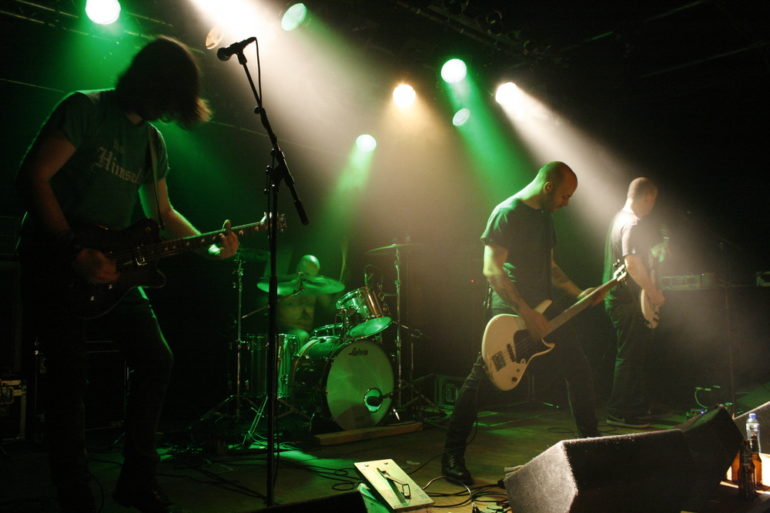 May 18, 2015 | Merleyn, Nijmegen – The American sludge band Torche is best compared with bands like Baroness, Kylesa and Red Fang. Their album ‘Meanderthal’ was voted best album of the year in 2008 by Decibel Magazine and their follow-up album ‘Harmonicraft’ contained a small hit ‘Kicking’. Though the music is dirty and heavy Torche has found a way to give it a poppy twist. This night they were supported by our neighbours 30.000 Monkies from Belgium.

30.000 Monkies
It was half past 8 and the Noise/Stoner rock formation, 30,000 Monkies started while everybody still was sitting at the bar. That changed soon the whole band just started screaming (not even in the microphone) and started to riff away on their guitars. It was an hectic and loud combination of screams and noise. The name 30,000 Monkeys is fitting them great the band blows out all their steam and don’t stop for nothing at the end of the show the guitarist even came off stage with a bleeding finger. Needless to say but these guys gave everything.

Torche
After drinking another beer at the bar it was time for the band that everybody came for ‘Torche’. There were a few technical difficulties the vocals faded in the loudness of the music possibly because the speakers couldn’t handle it but there were still the melodic dirty tunes to enjoy. Especially songs like ‘Kicking’ and ‘Across The Shields’ are doing it good. The crowd starts to nod their heads and a small mosh pit opens up. The singer is making some jokes here and there. ‘Loose Men’ and ‘Minions’ are some great songs from their latest album ‘Restarter’ as well as the last song they played the thundering ‘Annihilation Affair’