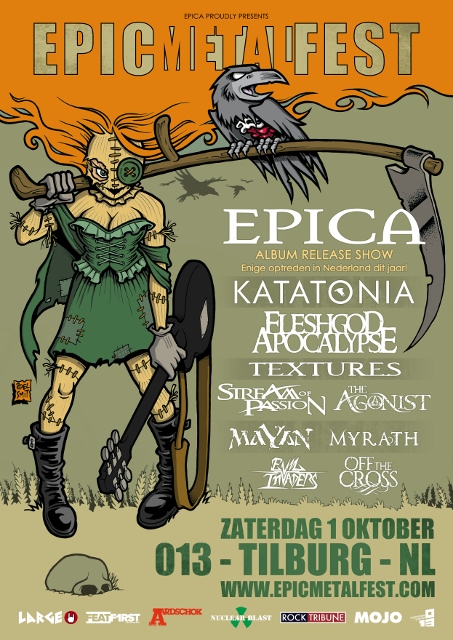 The Dutch symphonic metal band Stream Of Passion is added to the line-up of Epic Metal Fest 2016. Also Fleshgod Apocalypse (IT), The Agonist (CAN), Evil Invaders (BE) and Off The Cross (BE) are added to the program of this second edition of Epic Metal Fest. The bands Epica (NL), Katatonia (SE), Textures (NL), Mayan (NL) and Myrath (TN) were already confirmed.

The gig of Stream Of Passion will be extra special, because it’s one of their last concerts they will ever give. In April they announced that they will quit. It’s also a special performance for Epica, because it’s their only show in the Benelux in 2016 and they will present their new (seventh) studio album to the audience.

Epic Metal Fest 2016 will take place on October 1st (Saturday) at Poppodium 013, Tilburg. A total of 12 bands will perform at 2 stages. Early Birdtickets are available till June 3rd and after then the regular tickets will be sold.