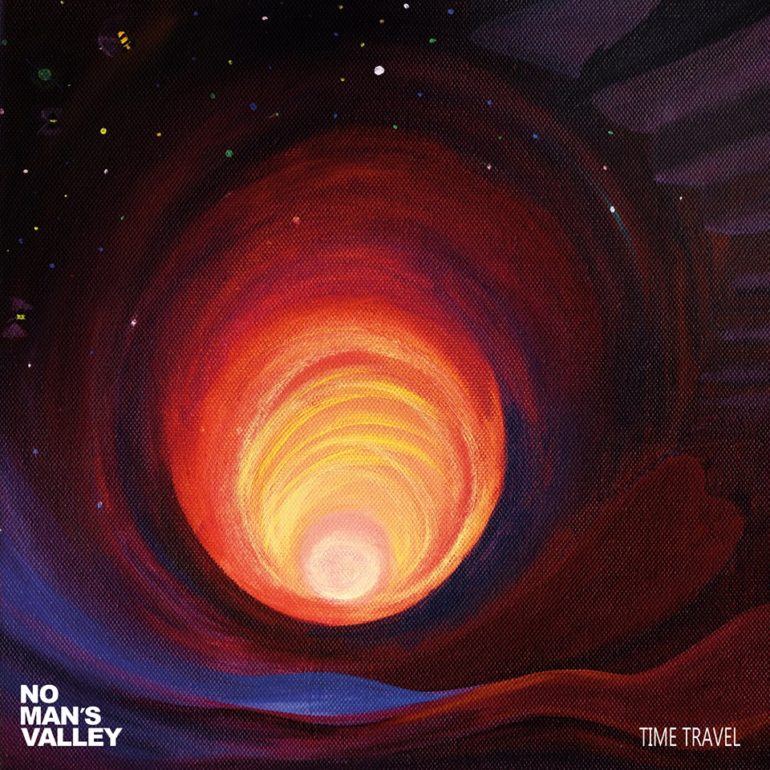 It’s time for something else. It’s time to travel into the valley of moody blues tunes, versatile riffs and rock innuendos with No Man´s Valley. Dark guitar play, a Hammond organ and melancholic vocals that take us back to the glory days of the 60’s. The band doesn’t shy away from a little rock and punkrock from time to time on their new album ‘Time Travel’ (July, 2016).

With its steady live reputation ‘No Man’s valley’ turns a page with their new album ‘Time Travel’. This band dances to its own tune, and doesn´t cave for commerce. They stated that ´they rather do their own thing´ and prove their worth on stage. Consequently, their stage reputation proceeds the album´s expectation. It’s quite a task to pinpoint the typical sound of this band, because there is a lot going on, which makes Time Travel an interesting album. Energetic, eager and with conviction the band delivers a steady performance. With the experience of true veterans NMV shows that they´ve grown since the release of their EP ‘And Four Other Songs’ in 2014. It is confirmed that ‘No Man´s Valley’ will perform at Pinkpop in 2017!

The main theme of the album is time, as the title suggests. We take off with the song ‘The Man Who Would Be King’, which is a powerful, short intro that is heavily influenced by ´field hollers´. These so called ´field hollers´ were sung by slaves down South in the old days. The drumbeat and distinct sharp vocals dominate the song. It takes you back to the cotton fields, where the air is thick with the sweat, blood and tears of heavy labour. Next in line is ‘Kill The Bees’, a song that gradually builds as it goes along. Here we catch a baseline that resembles the pace and sound familiar to The Doors. Rob Krieger´s signature can be heard from a mile away. Then the organ kicks in. A pleasant harmony between guitar and organ sets in. Like a dance between lovers. This goes on for a whole three minutes. The edited version on this album, however, is shorter. So be prepared.

Kill The Bees speaks of indifference of humankind towards the environment. A critical note on the album. Up next is ‘Sinking the Lifeboat’, where the rhythm plays out be literally waving as you would when riding the waves. Ups and downs all over the place, with a distinct role for the guitarplay, which distinctly stands out in the song. It almost sounds like a separate entity, standing on itself. There is a certain tension between the rhythm and the singled out guitarplay, which musically makes this a strong song. ‘Love or Axe Murder’ has kind of an eerie vibe, estranged and distant with a lot of contrast. A lyrically strong but slow-paced song. On the flipside we find ‘The Wolves Are Coming’. A more up-tempo song. Be ready to put on your dancing shoes and kick them off when done. The tone of the song is light-hearted and less ´heavy´ than previous songs on the album. Which is a nice shift in the overall vibe of this EP. Fortunately there is no overkill in repetition. Then there is ‘The Man Who Walked Backwards’. A strange and mysterious song which displays the typical sound of the band. The musical contrast in this song is created by the use of a harmonica microphone on one hand, and solo vocals on the other. Changes in rhythm make this an eclectic song. Shifts and different layers of instrumentals enhance the ‘shady’ vibe of this song. Suddenly you see yourself sitting in a raunchy dive bar, slightly intoxicated and not giving a sh*t. The lyrics are graphic and strong, but nothing to complicated. The title track ‘Time Travel’ is a steady rocker with moderate repetition, which shows less diversity in rhythm and style than other songs on the album. In comparison to other tracks on the album it feels like the band is holding back a little bit.

Last but not least the song ‘Goon’, a slow and easy ender. Partly spoken, the song sounds like a warning sign at the end of the road. It reminds me of Fight Club, because it’s like the lead singer has a split personality regarding his vocals. A powerful organ and gnarly guitarplay to top it off. At the end there is some relief with an angelic classic piano playing to send you on your way to travel on. Time to say goodbye an travel on. Fortunately rumour has it that No Man’s Valley is working on new material. Until we meet again.