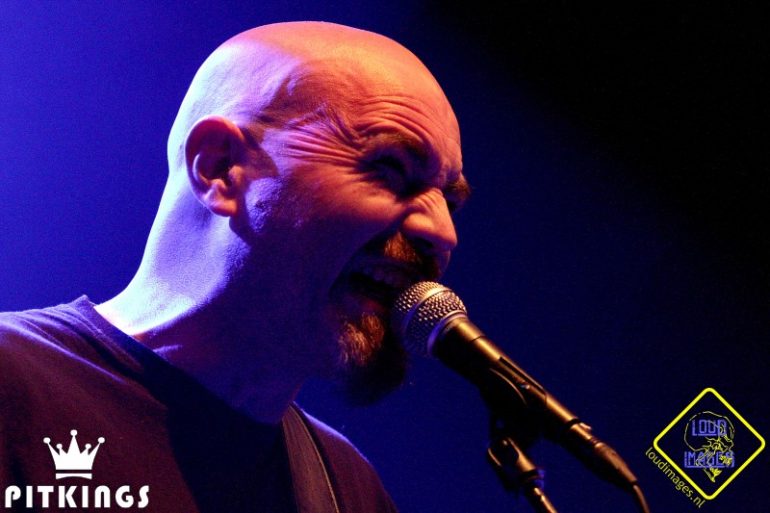 Desolate Fields (NL)
The melodic black metal band Desolate Fields keeps popping up at festivals and this shows their determination. Being the opening act is not the best slot, but hey, they are at least present at a lot festivals! Singer Jochem tells the small, but rapidly growing crowd that this is their 50th gig and that they are working on a album which is due in February 2016. I really look forward to this album! It’s a pity the sound is really terrible. It is way, way to loud for the small stage and not well setup. When Jochem stands to close to the edge of the stage, there is a high pitched feedback which nearly rips your eardrums. Nonetheless Desolate Fields play a decent set and next year should be their year. Eternal Solstice (NL)
This band is formed in the late eighties (1989) of last century, but still plays some pretty heavy metal. There are more and more people at the small stage and the sound is a bit better. Singer Ramon Soeterbroek sounds up close to the stage better (through the monitors) than a few meters away from the stage. Pity, but later in the set it gets better. Still to loud though. Eternal Solstice plays clean and fast and a big part of the crowd is bobbing their head. Phlebotomized (NL)
This death metal band has it’s roots too in the early nineties of last century, but have a vocalist who is a bit younger. The band is not complete this night. The bass player is missing and the violin player had a gig with Andre Rieu (the walz-king) according to guitarist Jordy. That last remark made some metal heads chuckle. Back to the music: Phlebotomized plays avant-garde death metal, which is characterized by very melodic music and vocals. Although singer Ben is more of the grunt-type, he managed even that to be melodic. It is a pity the violin player is not present, because I am really curios of death metal with a violin. From what I have seen on YouTube, is should be pretty awesome. At this point the temperature at the small stage is surpassing tropical values, caused by a defective airco. This is blowing hot air at maximum speed in to the room for the last to bands. The venue promised to take care of it during the first band at the large stage.

Severe Torture (NL)
The first band who is to perform at the large stage is Severe Torture and one thing which every one notices immediately is, the temperature drop. It’s perfectly cool and the fans at the roof are spinning at full speed. Even the band is happy with the coolness. Not only the temperature is way better, but the sound is too! Severe torture is hammering the crowd with a well varied older an new songs. The sound is raw, but in a very controlled manner. Damn, this is fast, tight and clean! The crowd is having a blast and there is a serious pit in front of the stage. There is even a stagediver who grabs his moment of fame on the stage. This is a metal party as it is supposed to be! Dead End (NL)
When the band Dead End climbs the small stage of Lucky it is warm, but noticeable cooler; the malicious airco is switched off! This band formed in the late eighties of the past century and have a younger vocalist, too. The mix is quite good, because the music is mature and the vocals are raw with rough edges. Perfectly for doom/death metal. What strikes the most is, the sheer fanatism of this band. They are really putting all their effort in their performance and that pays off! Great set! God Dethroned (NL)
The characteristic black, white rimmed, big, reversed crosses on the stage let you know that it is indeed God Dethroned who is is going to perform next. I witnessed their performance at Dokk’em Open Air earlier this year and was impressed. The performance is energetic and powerfull, although there is not a big show on the stage. God Dethroned is not the band you go to to have a visual masterpiece, but musically it’s a whole different story! The complete set is a feast for the (protected!) ears and, well: God Dethroned is a different league. Loud! Heavy! and it’s great to have Henri Sattler back on the stage with God Dethroned! The crowd is filling the big stage area of Lucky pretty well now and a lot of hair is flying. The only dissonant element of this show are the Christmas trees at the ceiling of the venue. If they were upside down, it would have fitted better… Soulburn (NL)
After the battering of the eardrums by God Dethroned, it is Soulburn‘s turn at the small stage. It is quite busy and I am curious what this band with Twan van Geel of Legion of the Damned will do. Soulburn is straight in your face metal and that is what you get! It is fun to see the joy this band has on the stage, although Twan is trying out his evil looks as we know from Legion of the Damned. The area and bar around the small stage is filling up pretty much now and it’s hard to get close to the stage. There’s a lot of head banging going on and Soulburn is making quite a few new fans with this performance. I am certainly one of them! Carach Angren (NL)
The formal headliner of this evening is Carach Angren. For their horror metal, the scene of glittering Christmas trees is even weirder but, that wasn’t their choice 😉 Right from the first notes, the atmosphere changes and when Seregor starts to sing, the largest part of the audience is bewitched and drawn in to the stories told. I simply love this kind of storytelling metal and I am not the only I observe as I look around. There is not that much head banging going on except on the first few rows, but most people look and listen (in awe?). Seregor’s expressive way of singing and moving around the stage is fun to watch and keeps you involved in the stories told. Ardek is also fun to watch. His empty stares and is jerky moves are a small performance by itself. Carach Angren was in my opinion the true headliner of this evening and I loved every single second of the performance. Sinister (NL)
After being expelled on a not subtle manner from the large stage area (there was a disco party to get ready for!) It seemed like all of the audience went to the small stage. It was busy like hell! It soon became clear, that Sinister had no business on the small stage, but belonged on the large stage. Probably because of the disco later that night, that was not possible. Unfortunate!
Their brutal and fast death metal is tight en super organized. I enjoyed the hell out of it. The small stage couldn’t hold all the enthusiastic fans, so it was very very busy. Good job for Sinister, but less for me. There was no way I could take a decent picture of this great band and I had no desire to fight my way to the stage and displace a guy in a wheelchair like a ‘colleague’ of mine did. So there was not much left, than to go to die adjacent bar and ordered a big glass of Tonic (don’t drink and drive). The sound there was surprisingly good in the bar and with some friends we enjoyed Sinister. Which was a very worthy closing act!

Conclusion
Stichting Heavy Rocks did a superb job organizing this festival in Rijssen. Great venue and great bands! The only pointers for the organization are; The small stage could use a bit more light and the music should be a bit less loud, because it was really, really loud. I know metal should be loud, but at 127 dB it’s dangerously loud and hurts the quality of the music. The biggest point of issue: they really need to drop the damn disco starting at midnight. I can’t wait for the next Lucky Metal Fest!