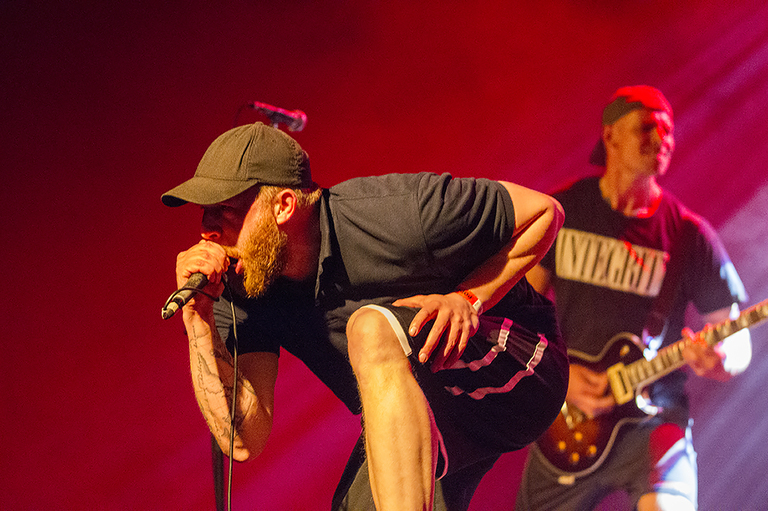 April 24, 2016 | Iduna, Drachten – The second edition of Hurd op Snein promises to be a feast of hardcore! Headliner No Turning Back has brought Dutch and international supporting acts to the Frisian town Drachten. Starting the day is Altered States from Sneek, followed by Manu Armata from the Frisian fishing town Harlingen and the infamous Cornered with band members from all over Friesland. International acts ‘Take Offense’ and ‘Siberian Meat Grinder’ have come a long way from home to play for a bunch of hardcore fans from Friesland. With a small metal market and hot dogs, this day is complete. Check the review of Sannette de Groes and the pictures of Oscar Anjewierden here at PitKings!

Altered States
The venue is not fully packed with people, but it’s a good start. Altered States has the honor to kick the day off. The sound is very recognizable as hardcore punk and influences of the New York scene aren’t hard to miss. The singer explicitly tells the audience several times that they come from Sneek. The bandmembers seem a little bit insecure and the singer never stops moving, not even for a moment. They bring a lot of energy but are still a little sloppy on the edges and when it comes to timing they are not very tight at moments. They play some of their own work but also lots of covers. With a little more own material and practice on and off stage they definitely have a chance to become a name within the Dutch hardcore scene. Manu Armata
Manu Armata is a known name in Drachten and in Friesland. The band always takes their crew with them in the audience so within a few minutes the first mosh pit of the day arises. Their bass player Peter has an injury which prevents him from performing today, so now there are three brothers Glashouwer on stage. The frontman is happy that his parents are in the audience today and he dedicates the song ‘Close To My Heart’ to them. The lyrics are hard to understand but the emotion is clearly visible. They really nailed the NYHC sound and they even look like New Yorkers. Clearly they’ve listened to acts like Madball and Merauder but the difference is the speed, some of the riffs are incredibly fast. That combined with the energy of the band is a treat for eyes and ears. The singer seems like he belongs on the stage and is very comfortable with audience interaction. Manu Armata end their show with the song ‘No Victory’, which is never a disappointment. Cornered
Time for Cornered, they’ve been around for quite some time now and are never not interesting. Last year they won a music competition and as a prize they got to perform at Dokk’em. However, they decided to send another band for some reason. Thankfully that is not the case today, they showed up. Singer Niels has completely lost his voice and after a few attempts at singing and shouting he has to call it quits, he does not seem happy about it. Asides from that Cornered plays good old hardcore and it never seems to amaze how aggressive their sound is, while the volume is a lot less high than during the performances of their predecessors. To solve the problem of losing his voice, Niels sends up different singers/fans from the audience, which is interesting but also a little weird. After twenty minutes they leave the stage, leaving a somewhat confused audience behind. Siberian Meat Grinder
All the way from Russia we have Siberian Meat Grinder. The band from Moscow sounds very promising and the audience is very curious. They take their time setting up the stage, and when they appear, all six of them, a lot of things are happening. First of all, for some reason the two frontmen have decided to wear black face masks, which leaves it impossible for the audience to see some facial expressions. Second of all, the rest of the band doesn’t wear masks, so what is the point? The sound of their music can be described as crossover hardcore. They mix hardcore trash with a lot of other genres like black metal and stoner rock. The two frontmen are completely in sync when it’s comes to singing and shouting, and make the grunts sound more impressive. The audience seems to enjoy it, but there is not a lot of movement. After every song it is “Thank you, Spaciba!” They end the show with the song ‘Sick Of It All’. Take Offense
After a short break Take Offense enters the stage all the way from Chula Vista, U.S. It appears some people in the audience have decided to go and watch an important football game, but a nice number of people still remains. The small singer thinks it is a little quiet here, and tries to change by making a lot of noise. He seems to be flying over the stage, and it’s a sight for sore eyes. His posture doesn’t get in the way of producing a lot of sound and at times spit. Quality wise they are the best yet and even the light really complement the act. They’ve really mastered the eighties NYHC sound and are an excellent edition to an already successful day of hardcore here in Iduna. No Turning Back
For the ‘Grand Finale’ Dutch hardcore act No Turning Back has showed up to complete the night. From the other side of Holland, Brabant, they have come to entertain the Frisian audience. Frontman Martijn looks like a survival expert and immediately asks the audience to step forward a bit. A lot of stuff goes down on stage and they put a lot of energy in getting the “sober Frisian folks” to participate more. They have a lot of interesting pace shifts making the sound of their music more interesting. The audience is quite calm except for the fans in the front. The sound fits perfectly within the genre of today, they make old school hardcore punk and seemed to have listened to band as Madball, Sick of It All and Biohazard. The lack of audience doesn’t sit well with Martijn en this shows. Besides all that, they are the perfect ending of a day full of hardcore and they leave the audience satisfied. Oscar is from Leeuwarden and photographer for several magazines and festivals. On occasion, he shares his pictures of Dutch heavy bands with us, here at PitKings!