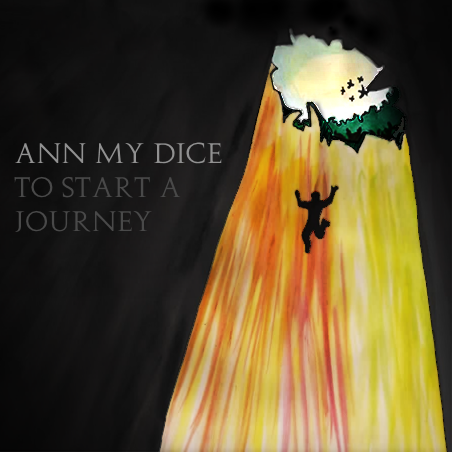 On August 28, 2015 the Dutch metal band Ann My Dice released there debut album ‘To Start A Journey’. They call themselves ‘The cutest metal band from Rotterdam, ready to deliver nuclear devastation’. Cute and metal, does that even work together?  Let’s see how this album works out.

The general first impression isn’t bad. The songs do all fit together. They stick to a sound which you can find back in all the songs. It’s a mix of more brutal metal with some alternative metal (due to the floating voice in some songs). It is noticeable though that this is their first album. The mixing sometimes takes a wrong turn, the guitar is not loud enough, vocals too loud. But hey, I’ve seen worse first albums. Some songs are strong, some could use a bit more power. A personal favorite is ‘Mother Earth’. The song does have this powerful rhythm. I did listen to it a few times and I do like it. If you want to summarize the album, I’d suggest you listen to this song. It’s a mix of a lot of different influences.

So certainly not bad! Some songs do lack structure, ‘Wasted Years’ for example starts off nicely, but in the middle we lose the rhythm on which it started and after a long break the song ends on something completely different. Take out the break around the 3 minute mark and it could even be two separate songs. The album ends with a calm song called ‘It’s Cold Beneath’. You expect a final chance to get your head moving, but you can’t. It gives the impression that there isn’t any energy left for some raw power. The song ends with an outro that is similar tot the intro of the first song ‘Facade’ which is a nice touch.

Conclusion
There is a lot of potential for Ann My Dice. They took a successful start with ‘To Start a Journey’, but there is still some work to be done. Especially on the ‘floaty’ vocals, they don’t really match the songs much. Sometimes it’s a bit out of tune, and the mixing of grunting with a normal voice doesn’t work out good all the time either. Other than that, not bad! I’m looking forward to see their second album.