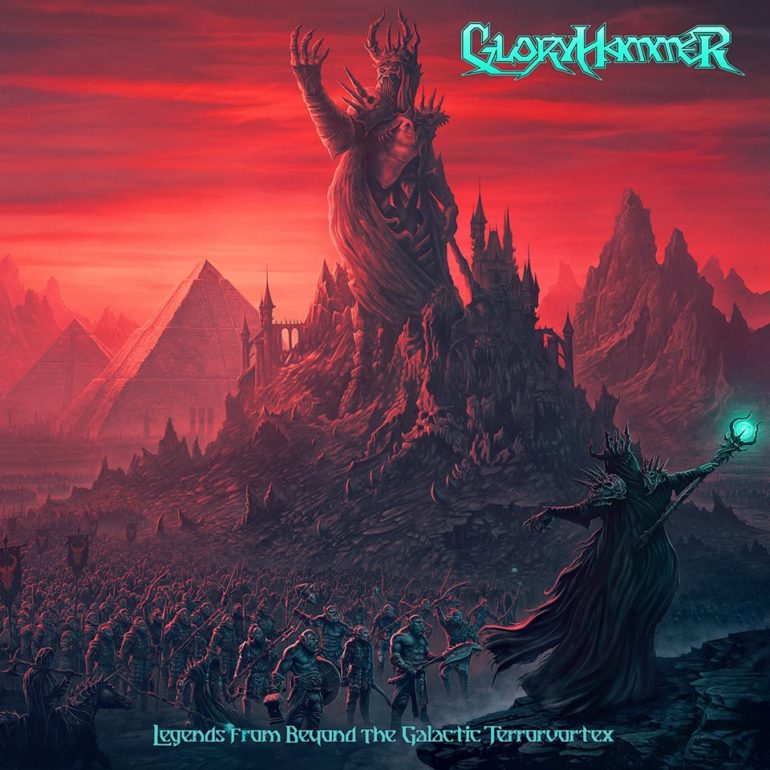 Led by the alter ego Angus McFive XIII, the English conceptual power metal band Gloryhammer is back again with now their third album called “Legends from Beyond the Galactic Terrorvortex” released on May 31, 2019. Starting back in 2009 the front man of Alestorm, Christopher Bowes, wanted to create a band for a fantasy base fitting within the power metal.

In 2013 their debut album “Tales from the Kingdom of Fife” garnered high critical acclaim from critics and fans. This was followed by their second full-length called “Space 1992: Rise of the Chaos Wizards” which topped the success of their debut.

Is their third a success again? After their debut I kind of gave “Space 1992” a pass so these are the first new tracks for me. And to be honest, it is a bit of a repetitive album to me. Starting with an intro to suck you into the story which continues effortless into second track “The Siege of Dunkel (In Hoots we trust)”. It gives me the feeling of going back to the Therion – Theli Album, with a bombastic opera choir. Sadly this doesn’t continue throughout the album. The track in itself is a great track but after this all efforts about being surprising is outdone by the fact that this already done on the earlier albums of Gloryhammer.

The album still contains some of the finest riffs and solo’s as one wants to hear on a power metal album, but that isn’t surprising with these artists. The album is a solid listen, but sadly I expected some more. With the total production and skill of the artist I give this album a 7.5 out of 10, but I don’t know if the “Hoot Army” can win me over for a fourth album.

Tracklist
1. Into the Terrorvortex of Kor-Virliath
2. The Siege of Dunkeld (In Hoots We Trust)
3. Masters of the Galaxy
4. The Land of Unicorns
5. Power of the Laser Dragon Fire
6. Legendary Enchanted Jetpack
7. Gloryhammer
8. Hootsforce
9. Battle for Eternity
10. The Fires of Ancient Cosmic Destiny
– I: Dundaxian Overture
– II: The Battle of Cowdenbeath
– III: Return of the Astral Demigod of Unst
– IV: The Knife of Evil
– V: Transmission