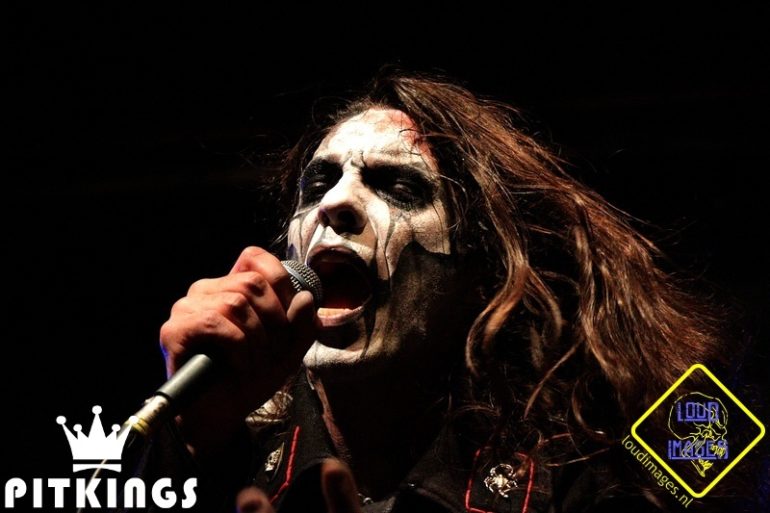 September 5, 2015 | Hoogeveen – There I was, at the gate of OccultFest 2015. The three towers of the stage were clearly visible from the road and the booth in front of me was buzzing with activity. The 14th edition of Occultfest, which started at Friday evening. When I arrived at the festival on this rainy Saturday, the first band of the day started to play. So the timing was perfect! I got my gear ready and walked to the stage to take pictures and get inspired for an extended festival review.

Desolate Fields
This band totally surprised me. For an opening act on a reasonably small festival these guys looked a bit out of place. Desolate Fields is from Hengelo (gld) and their melodic post black Metal was awesome! Ultra heavy en very well performed! It was a pity there were only a hand full (literally) metalheads in front of the stage. I think we’ll hear more of them.

The lack of people in front of the stage was unfortunately the fate of most bands this day. The weather wasn’t favoring OccultFest regrettably. Violent showers kept most of the spectators in the large tent. Only a handful defied the bad weather, so respect to them! Nox Aeterna
Next up was Nox Aeterna. This was just as a surprise for me as Desolate Fields. Good solid music, good solid performance. The only bad thing was, the worst shower of the day right in the middle of their set. A crowd of about 5(!) defied the rain and the band had to cut their set short by a song. Pity! I would like to hear more of them! Their new single ‘Resurrection: Impossible Perception’ is out and very worth to listen to! Asgrauw
This band is something else: It’s the first band with corps paint of the day and a satanic voice. They describe their music as “Raw, powerful and straight, filled with melodic riffs and blast-beats combined with static rhythm sections, both underlined with filthy and raw sounded vocals in both the Dutch and English language”. Although Asgrauw is not my favorite type of metal, the set is interesting enough to keep me listening. What strikes me the most, is the sometimes very melodic music. This make them stand out of their competition. Skullsuit
It took some time before Skullsuit could start their set, but when they did, there was music! This band from the South of the Netherlands plays groove metal with some blues influences and it sounds great. The small stage of OccultFest is quit filled up with this 5 member band. Roy Groenink, the bands frontman, has to slalom when he walks around the stage. The band puts on a nice show and at the end Roy invites some of the present kids to the stage, while he is singing on the field. The 2 little girls on the stage even start to headbang! 🙂 Skullsuit is not the heaviest band of the day, but puts down a solid performance and play a great set! All The Shelters (F)
Right from the start it is clear that this French post-hardcore band means business. Their energetic set should be very catchy, but the crowd stays in the big tent. To much frustration of the band. They jump and bounce on the stage and the 20 people in front of the stage have a good time! At one point Julien decides to get of the stage and go in to the field to get closer to the crowd but no avail. Next he decides to crowdsurf, which is hilarious with a crowd of 20, but he manages it! All The Shelters played a great set. Illusionless
Progressive death metal is what Illusionless plays and they play it with speed! The grunts of Melle Brouwer are deep and long and fit well in the total package. Although I’m personally not a great fan of ‘gargle metal’ I must admit, that Illusionless does it well dosed. At the end of this year there will be a new album, so that’s something to keep track of if you are a fan. Arroganz (D)
This band enters the stage with a lot of grease and fake blood on their bodies. The stage is well dressed for the occasion; crates with skulls, gas masks and stuff. Although they play a well defined set of death metal, the audience cannot be interested to come closer. -K-, the vocalist, swears at the crowd, but even that does nothing. And that’s a pity, because these Germans deserved a bigger crowd in front of their stage. Contradiction (HU)
When this band starts to play, it’s obviously thrash they play; old skool thrash and I like it! These guys go a long way (founded in 1989!) and hit the stage on quit some nice venues. At some points in their set, it sounds a bit like Metallica; the old Metallica and that’s not bad at all! (especially when you’re my age). Check ‘m out when they are in you neighborhood! Selfmachine
I guess one of the most important qualities you have to have if you want to join this band, is to have fun on stage. The bad weather didn’t influence their mood, better yet, front man Steven Leijen from Selfmachine is enthusiastic and energetic. He as a good sense of humor and talks very fast in between songs, which is quit funny. But when it comes to playing music, there is nothing to laugh about. During one song, frontman Steven and bassplayer Mark decide to run to the other stage to perform there a part of the song. Their modern metal sounds catchy and is diverse. It was a joy to see and hear this great band! Tribal Spirit
At last! When Tribal Spirit is playing, the rain has stopped finally and the crowd is coming forward! According to Facebook, there genre is heavy/thrash metal, and that seems to fit pretty well, although there are some doom influences too. Its fast and brutal and the crowd is getting warmed up! There are songs with nice breaks, but some of the songs without these breaks tend to sound a bit similar. All in all a very nice performance! Undawn
Complex and loud! The guys form Undawn know what heavy metal is and they’re eager to let you hear it! The set is varied en well put together. There are some nice twists in the songs, that keeps you listening an looking. By the damage on the field (there is no grass to be seen any more; only ankle dee mud) this band got the crowd moving! Much to soon it ended and I know I’ll be seeing them again sometime! Excrementory Grindfuckers (D)
Is this grindcore? Hmmm… A parody of grindcore would fit better in my opinion. What ever it is, it is funny as hell! It look like they have quite a fanbase in the Netherlands, because it’s now busy in front of the stage. Besides grindcore, the band plays soms grindcored pop songs, which is hilarious. Some quite heavy songs have absurd breaks, which are good for a few laughs. The cover of ‘No Limit’ of the Dutch duo 2 Unlimited really cracked me up! The band had a good time too and between songs they offer to trade merchandise for weed. Carach Angren
A complete different league is Carach Angren. Their horror metal is very well written and composed. This is the band the crowd came for and they are not let them down. Songs from their first demo to their last album ‘This Is No Fairytail’ were played and the energetic Seregor puts all his effort in it.
A gig of Carach Angen is something different than any other metal gig. It’s intense and a spectacle. Because of the narrative stories of the albums, one would expect a complete album as a gig. Although that would be great too, the setlist of this night proves that it is not necessary. This gig was right before their China and Russia tour and that is something to be proud of! Killing Cult Society
The last band of the night and with a crowd of at least 300 for Carach Angren, the merely 50 that stayed for Killing Cult Society, was a bit of a let down, but not for these guys! With the energy of a bunch of teenagers they spit their music to the crowd, whom it receives with eager enthusiasm! Songs like ‘Sharks’ en ‘Overdrive’ are on the setlist and are simply great! Heavy guitars and very nice breaks makes this a band to keep an eye on! Conclusion
I spoke to some people complaining about the strict rules of bringing food and booze to the campsite. In their opinion that was the main reason, why there were less visitors. On the website of OccultFest was a very clear and reasonable explanation of the decision; visitors on previous versions left a lot of garbage and broken glass on the camp site, which the organizers had to clean and pay for.
So, if we all behave a little better, these strict rules may become obsolete and the slogan of the OccultFest “Come to the OccultFest and bring a tent and a case of beer” might be back!

When I drive home from OccultFest 2015, I realized, what a great festival this is! These people organized with little means, a heck of a festival with superb bands! Next time a bit less rain would be nice!