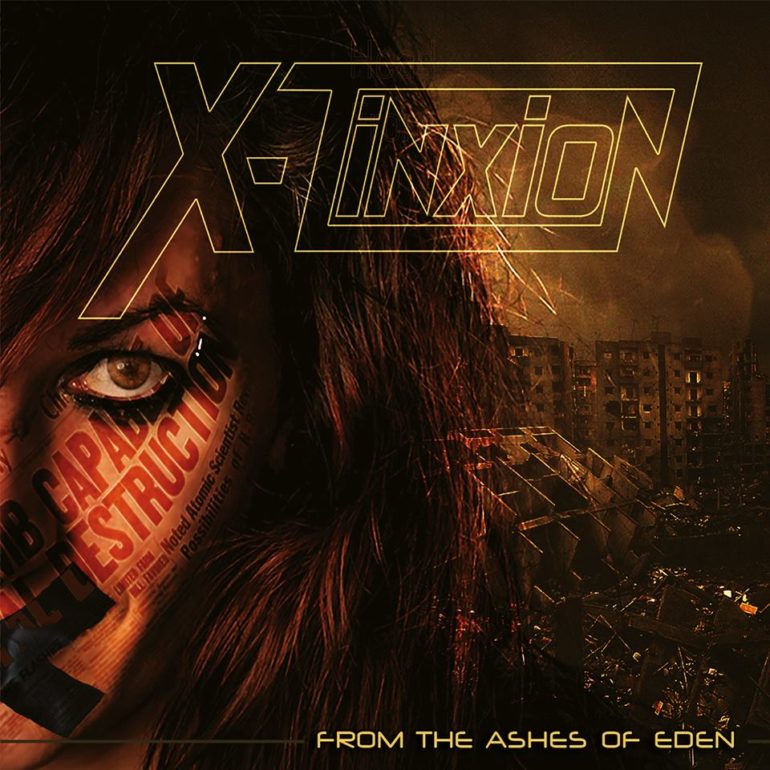 I was pleasantly surprised when the album ‘From The Ashes Of Eden’ of Dutch female fronted thrash metal band X-Tinxion fell on my doormat. I have known X-Tinxion for a few years already as I bought their 2010 EP ‘Act The Injured Innocent’ at one of their live shows. So I was already familiar with the band and their sound. Let’s find out what this new album brings us in 2016!

First, let me complement the band on the production of the album. Where X-Tinxion in the past went for a more raw thrash sound, the new mix sounds fresh and modern, but still containing it’s aggression and heaviness. I really like the production of this album as all the instruments are very audible and the mix is very clear. We also clearly got some talented musicians here. Monica who has an impressive vocal range, the guitar duo Conrad and Sepp who unleash riff after riff and topped with some great solo’s, the drumming of Peter who drives the band to tight grooves and great speeds, to be complemented by Kornee who easily stands his own during the aggressive songs.

The first song of the album is ‘Amalgamation‘ (video). In this song Monica clearly displays her talents. From clean singing to grunting, she does it all. ‘Amalgamation‘ is a very strong, catchy opener of the album. With ‘Survivors Of Hell‘ the tempo goes up and we get some fast and furious thrash metal with some tight riffing. ‘Severed From Heaven‘ starts with a monster groove and then transcends in a tight thrash song with in the middle a beautiful solo. ‘Genetic Sickness‘ is fast, heavy and with catchy chorus with some clean vocals. Again a great solo by Conrad! ‘Uniformity‘ has a cool timing progression when the song starts and it quickly turns in to an fast but melodic song. It also features guest vocals from Marloes Voskuil (Izegrim).

Then it’s time for the surprise of the album, ‘Eden‘, which start with a beautiful acoustic intermezzo. It was a blast to hear such sweet tones between all the violence, but it works out really well. After that it continues into the fast and furious song called ‘Narrow Path‘. The middle part is rather catchy again but it works really well for the song and gives it a modern touch that more songs on this album give to me. The song ‘Civilised‘ is a song that I remember seeing live before. It starts with a great melodic intro. Again an impressive display of Monica’s vocal capabilities. She does so many different voices in this song, I am really impressed. ‘Destruct & Reanimate‘ follows the same guidelines with starting groovy and ending in a furious thrash song. ‘The Divine‘ features George Oosthoek (Orphanage) on guest vocals and is probably my favorite song. From the opening riff this song catches you by the balls and never let’s you go until the song is over. Again a catchy chorus with clean vocals and some great dual riffing from Conrad and Sepp. The last song ‘In Progress‘ starts with a heavy bass and groovy drums, but it doesn’t take long before their thrash riffs are released.

I think this album is a must have for every thrash lover, so be sure to get it! If you have the chance to see them play live, be sure you will, because they deliver you a hell of a show!