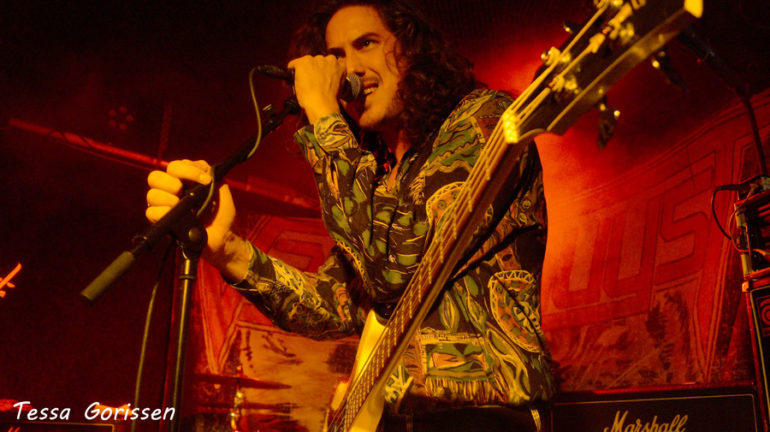 September 25, 2015 | Little Devil, Tilburg – Bands come and bands go. Unfortunately… After 7 years Vanderbuyst decided to stop. This traditional hardrock / heavy metal band was founded by Willem Verbuyst and soon Jochem Jonkman and Barry van Esbroek joined him. But before they say farewell, the band does one last tour. The last two shows are in the Little Devil in Tilburg on September 25 & 26.

The Blues Junkies
The evening starts with The Blues Junkies. Even though the band started as a blues band, the guys now play old school rock. It’s a perfect match for this evening. The public is swinging from the first notes, but not everyone is in the venue yet. A lot of people are waiting outside for the headliner. But everyone who is present, likes the band. You can see that the band is used to be on stage. With self-confidence the band plays every song. A lot of guitar solos and a drum solo are adorning the show. And when the band leaves the stage, almost everyone of the audience is in the hall. Vanderbuyst
After a short break it’s time for the act everyone is waiting for: Vanderbuyst. Even though it’s one of the last shows of the tour, the band is smiling a lot. With a setlist full of old and newer songs, they please the crowd very well. The crowd is singing along with songs like ‘Flying Dutchman’. But you can notice that the crowd has some difficulties with the fact that the band quit after this tour. They are pretty quiet this show. But Vanderbuyst is making the best of it. A very energetic show is the result. They want to make a party out of it this time. They’re jumping, swinging and making fun all the time. They love being on stage, love making music. And it’s too bad they’re gonna quit.

When they’re playing ‘Sweet Goodbye’ acoustic the first tears are coming from the crowd. Even the band is a little sad. But still they’re making the best of it. And with ‘ To Last Forever’ they end the evening in style. And with a few dj’s they party along.