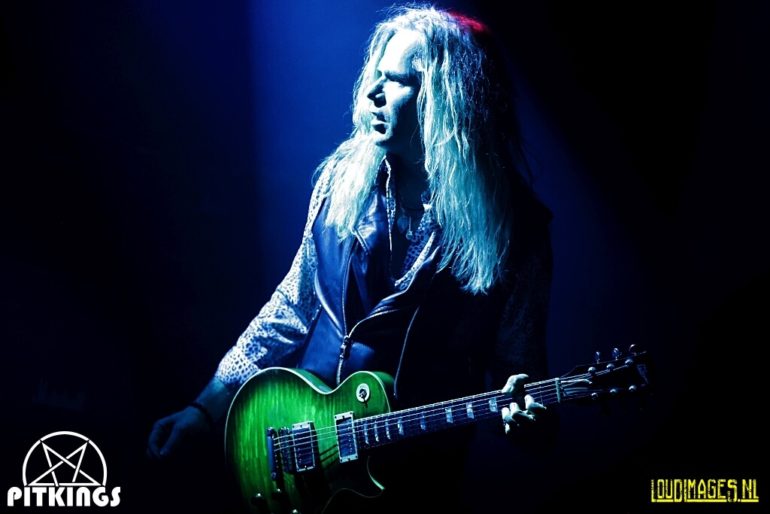 December 21, 2018 | Fluor, Amersfoort – On the shortest day of the year I drive the half hour to Amersfoort for the gig of Vandenberg’s Moonkings and Attila. The venue “Fluor”, who’s got it’s name form the toothpaste factory who was previously in the building, is somewhat hidden from sight. It is on a closed parking lot, around a corner behind scaffolding. I guess I was the only one who had some trouble to find it, because once I was inside it was packed! With 15 minutes to the support-act, that is quite unique.

As I work my way towards the stage, I see a different crowd than at other concerts I went. The average age is quite a bit higher and there are a lot of women present too. Adje still works his magic on the ladies, that much is notable!

Attila (NL)
This local power metal band Attila has the honor to open for Vandenberg’s Moonkings. Although it is not exactly nowadays power metal, it still some pretty beefed up rock with a bluesy edge to it. It is roughly the same type of genre as their counter parts of this evening, so the audience is going to be warmed up quite nicely by this band. 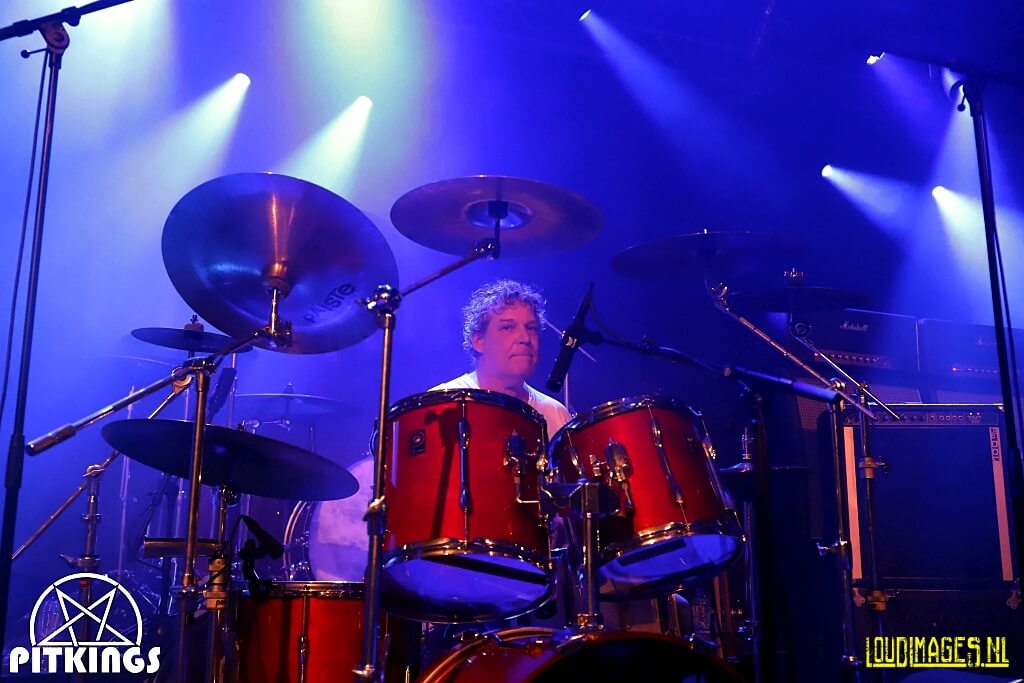 It is obvious to see and hear, that these guys are experienced performers. They play their music tight and supple. The guitar solo’s of singer Herbie Vanderloo are impressive and lengthily! It is very busy in the venue and. un-Dutch, it is even very busy in front of the stage. There are some spots free, but it is hard to walk around. 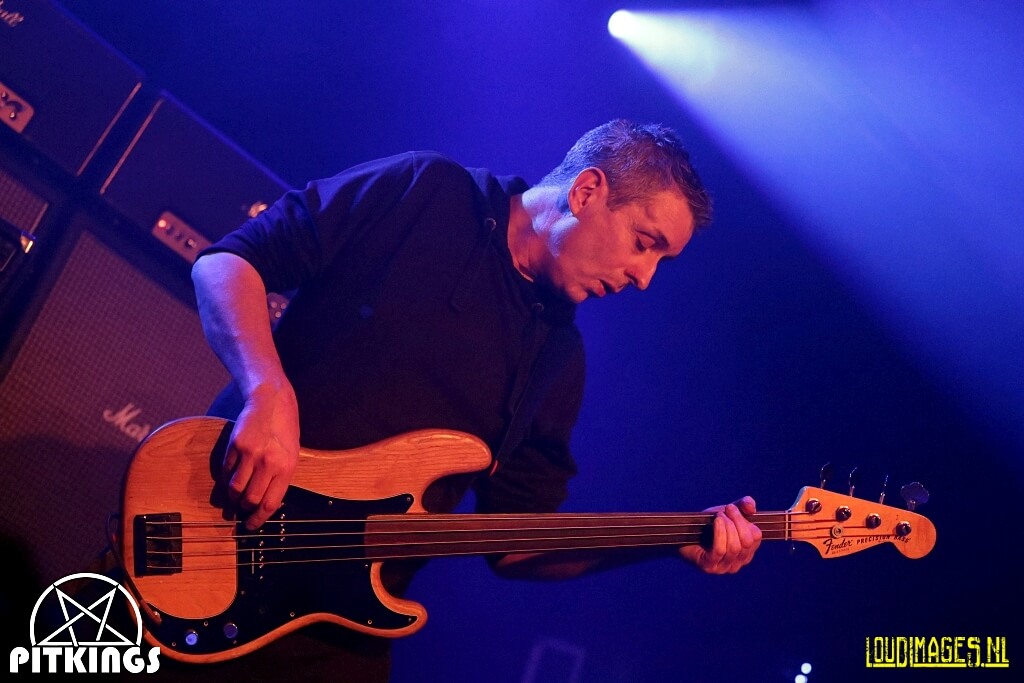 In the front rows there are quite a lot of men and women who sing along and that is always great to see. The amount of time Atilla gets is decent, although Herbie wished for more and I don’t blame him! A packed venue is always great to perform in. 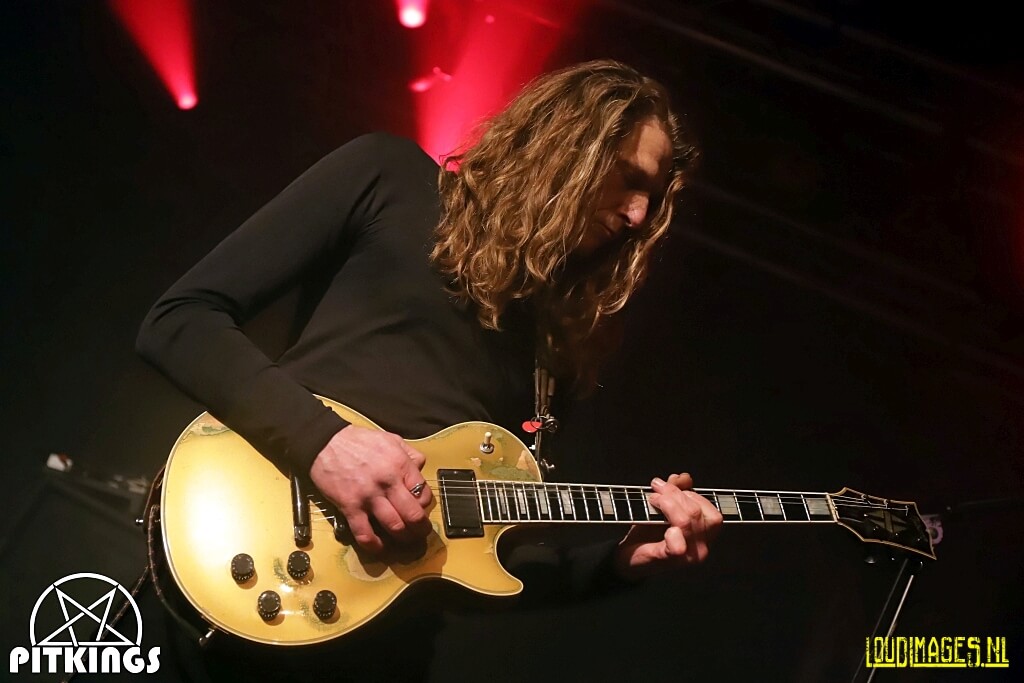 Vandenberg’s Moonkings (NL)
After a bit of an unorganized change over, it is time to stick the set lists to the stage and to check the last cables and then the wait begins. In the mean time I get tapped on the shoulder and the tour manager instructs me to only take pictures the first 4 songs. That’s a bummer, but that is just the way it is. It only takes a few minutes when the band enters the stage and a roar goes through the venue. It is crammed in front of the stage and the feast for the ears starts with the first notes. After one song I am blown away by the voice of Jan Hoving. Goddamn is he something else! 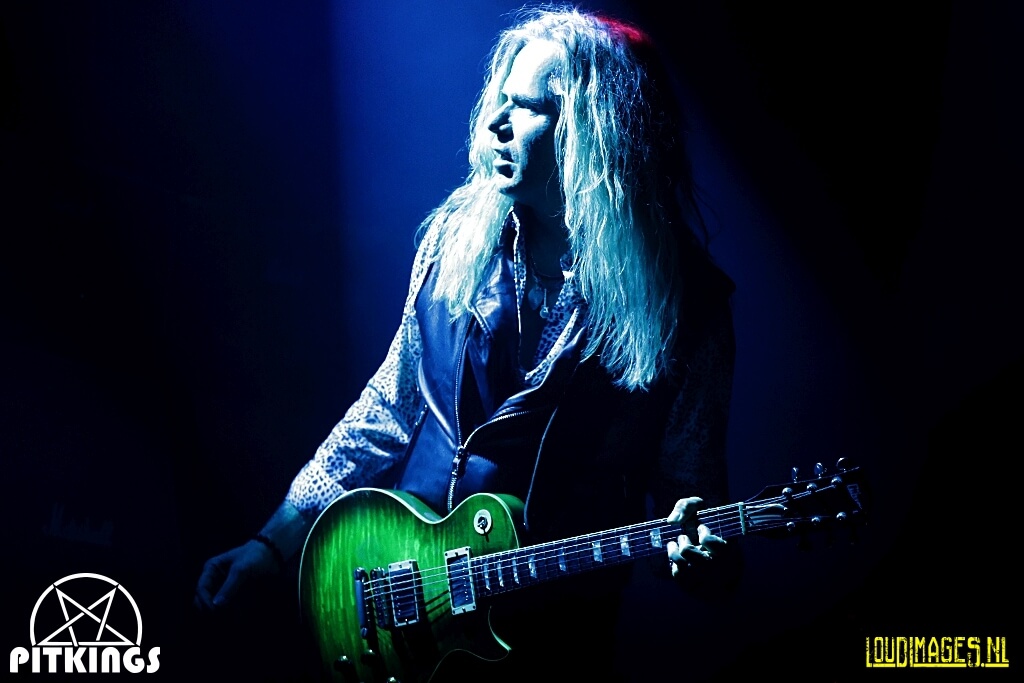 Bass player Sem Christoffel is moving about the stage as is singer Jan. Adrian stays on the right side of the stage and that is to bad. A lot of fans in the middle and left side of the stag would have love to see him do his magic on the guitar from a little bit closer, bur regrettably there is no such luck. 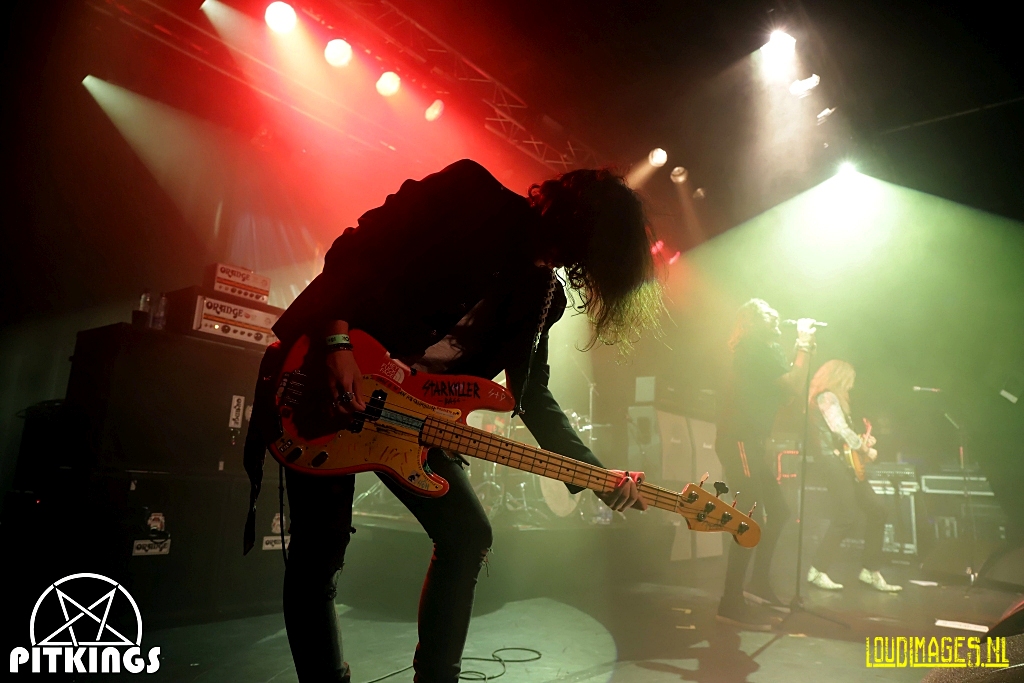 After the allowed 4 songs I stow away my gear and leave my spot on the edge of the stage to a very happy lady. I walk towards the back and stand and look & listen to the show. The light show which they now put in to action is great and is matching the music tastefully. After a few songs more, it is time for an acoustic intermezzo. Adrian and Jan perform a few ballads with Adrian on acoustic guitar and it is awesome! I see a lot of ladies swoon and mouthing the lyrics. The lime lights are on Adrian en Jan and that is quite spectacular view. 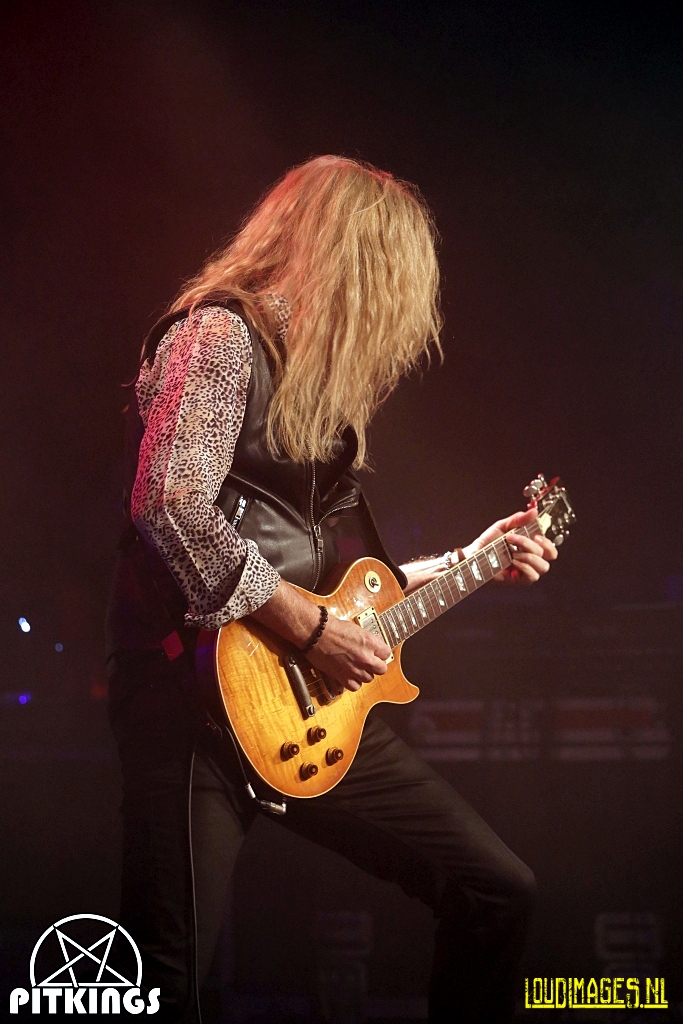 Mart Nijen Es performs a drumsolo that comes from an other world. The lightning is superb and moves with the rhytm and Mart is unleashed. Damn this solo give you goosebumps! The crow present is singing along with a lot of songs, but the Led Zeppling cover of “Rock and Roll” is sung along by the vast majority of the people present and Jan is cheering them on to continue. When “Here I Go Again” sounds, every body is singing along and a lot of fists are raised in the air. In my opinion Jan can rival David Coverdale on this Whitesnake cover “Here I Go Again” and get the upper hand. 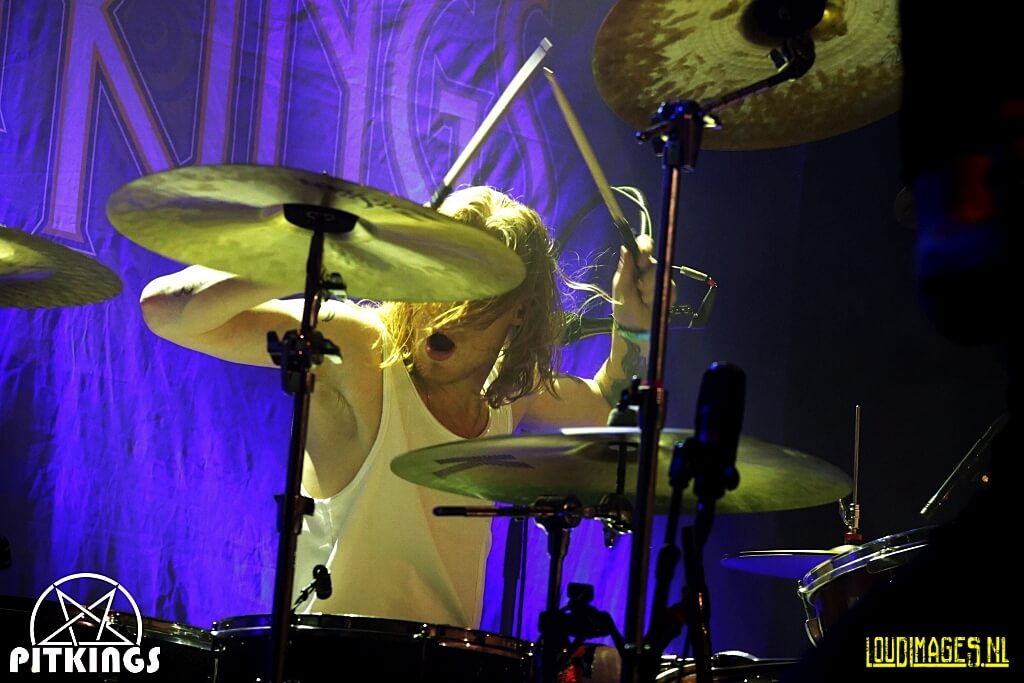 When the set is over, there is a loud roar for the band to return and of course they do return. The first encore is “Burning Heart” and some elderly couples grab each other a bit closer and sing along. I decide to go in to the hallway to be in front of the stampede. Although this was not a true metal filled night, I love this kind of blues rock too. When performed to perfection like Vanderberg’s Moonkings does, it is a night to remember! 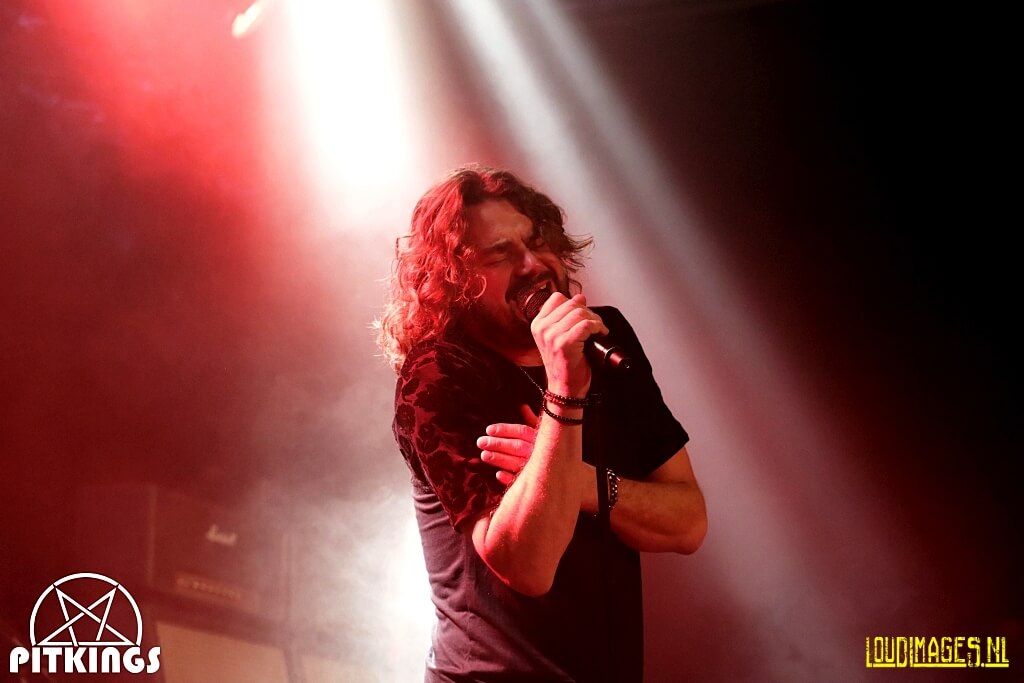