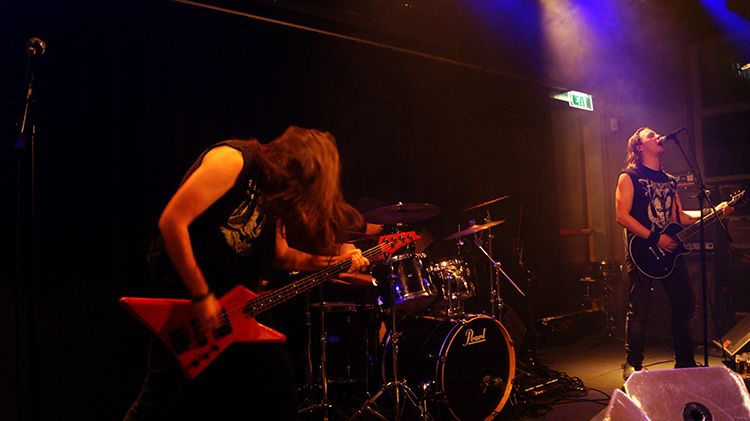 September 12, 2015 | Mezz, Breda – Every month Mezz organizes Thrashbangers Night, an evening with a lot of metal. This time death metal took over the venue: Luctus (LIT), with support acts Spermafrost (BE) and Six Million Juice (NL). Tessa was there to write a review about it and took some pics.

Six Million Juices
The evening starts in an empty hall with Dutch crustband Six Million Juice. The members of the band climb the stage wearing balaclavas. Singer Lennard Goossens even wears a helmet. The band plays like they call it ‘a special black metal set’ this evening to fit in the line-up. But still there’s not a lot of black metal in their songs, which only last for a minute. A lot of noise fills the hall and also a lot of cookies, which are thrown by Lennard. A nice support act, but totally not black metal. Spermafrost
The second band is Spermafrost. This Belgian band mixes black metal with the oldschool rock ‘n roll. The result: dance-able music with a lot of screaming. But no make-up, no balaclavas. Just guys with long hair and beards: the stereotype metalhead. The hoarse voice of Dor and the backing vocals of Vnknow are perfectly hearable. You can see the band has brought a lot of support with them. The hall of Mezz is a little more filled than at the show of Six Million Juices. The people in Mezz are ready for Luctus. Luctus
When Luctus (Lithuania) starts a lot of people are already heading home. There aren’t much people left, but the ones who stayed are enjoying themselves. The guys of Luctus are wearing a lot of black and white make-up and singer Kommander L. doesn’t wear a shirt and the eye of providence on his chest takes the attention. The band has some technical issues, but when that’s fixed they play a hell of a show. No mistakes can be found at the serious looking band. You can see that they have a lot of experience playing on stages like this. Even though there weren’t a lot of metal lovers, it was an amazing night. On to the next one!