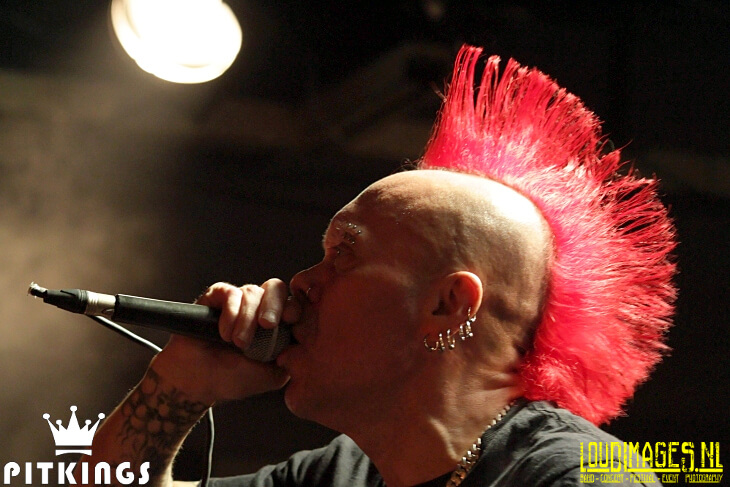 April 27, 2018 | Baroeg, Rotterdam – I was able to relocate a scheduled meeting in the vicinity of Rotterdam, so it was a relatively short last leg to finally see The Exploited again. The guys from the German groove metal band Code Red are the lucky ones to support The Exploited during this tour.

After finding the perfect parking spot in the vicinity of the venue, I saw there were quite a few punks hanging outside in the sun and I decided to join them. After some relaxing in the sun the doors opened, but most of the people stayed outside in the sun. I had some gear to prepare so went in to get ready. After a quick check of my camera bag by the friendly security guys, I went to check out the merchandise. For old times sake I bought their last tour shirt even though it was a bit too small. Not much later the large doors to the stage area were opened and with about a dozen others we go in…

Code Red (GER)
With 350 sold tickets, the venue was sold out. When Code Red starts to play there are maybe about 2 or 3 dozen people inside. Luckily the number grows while the band is playing and it is about half filled when the bands take their final bow. Programming metal as an opener for punk might not seem obvious, but in this case it works out pretty well. This German band plays groovy thrash metal and does that pretty decent. At times it is very catchy indeed. ‘Deceiver’ is one of the songs the crowd responds very well to. There are quite a lot of headbangers present in the crowd and even more than a handful of punks bob their head in appreciation too. 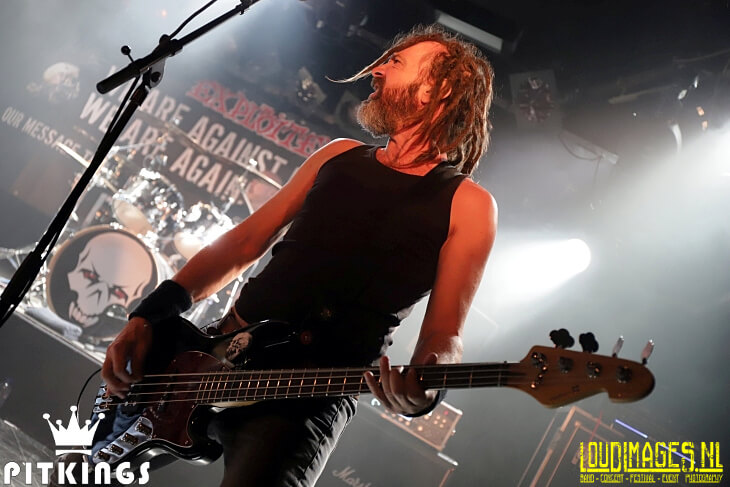 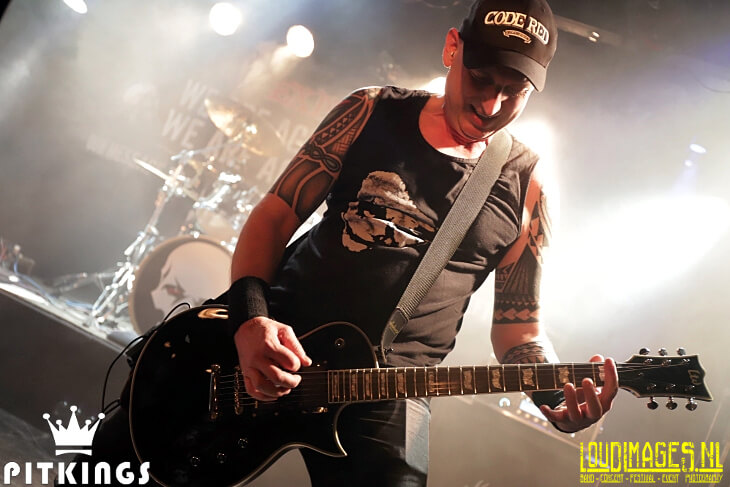 The band enjoys their time on the stage and that is very visible. The band members move around the small stage and interact with the audience a lot. With “I Stand Alone” Code Red finishes their set after exactly 45 minutes. This fast song is much appreciated by the audience. Code Red get their well deserved cheers and applause as they leave the stage. This was great fun! I can think of a few festivals in the Netherlands where Code Red would fit quite nicely. 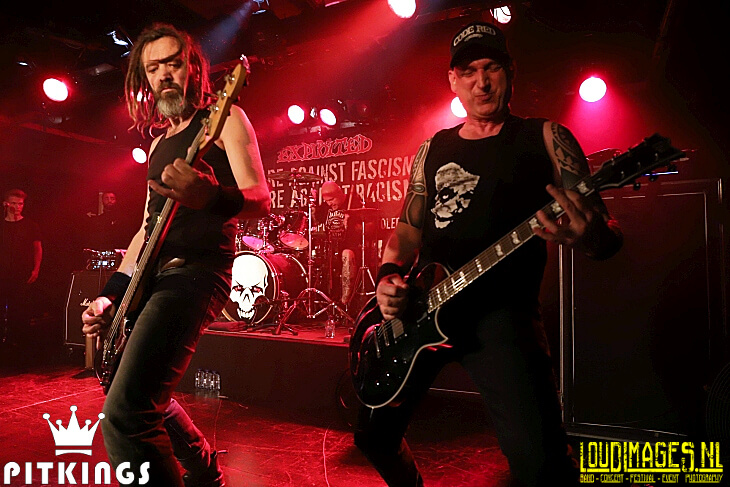 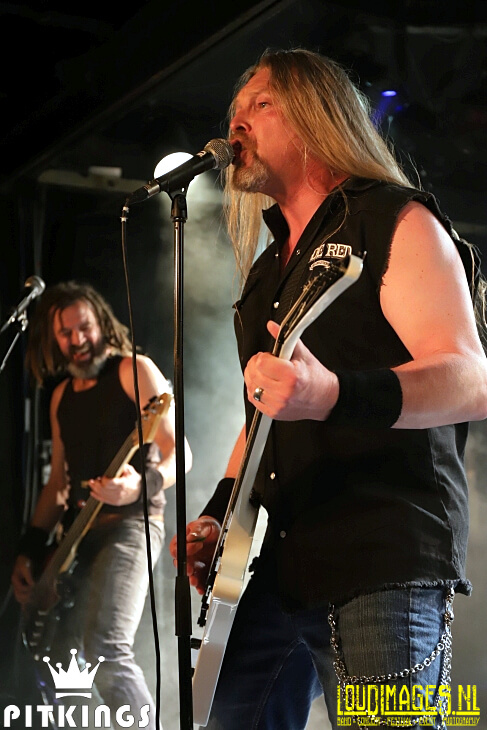 The Exploited (UK)
It’s getting busier and busier as the anticipation grows for the climax of the evening. Every time the red mohawk of Wattie appears in the door opening beside the stage, the crowd goes wild. When it is showtime, the band enters the stage and everyone who was still in the bar section of Baroeg is now in front of the stage! It is stuffed in the venue as Wattie walks on stage and the room explodes! This icon of punk still has quite a fanatic following and there are quite a lot of youngsters too!

Wattie looks quite a bit older these day’s, but although he seems fitter. For a second I have a flashback to Slayer at Into The Grave, where they couldn’t fully match the speed of the songs on the album… But goddamn! When Wattie starts of with “Let’s Start a War”, my split second doubt was based on precisely nothing… This is going to be a hell of a night! 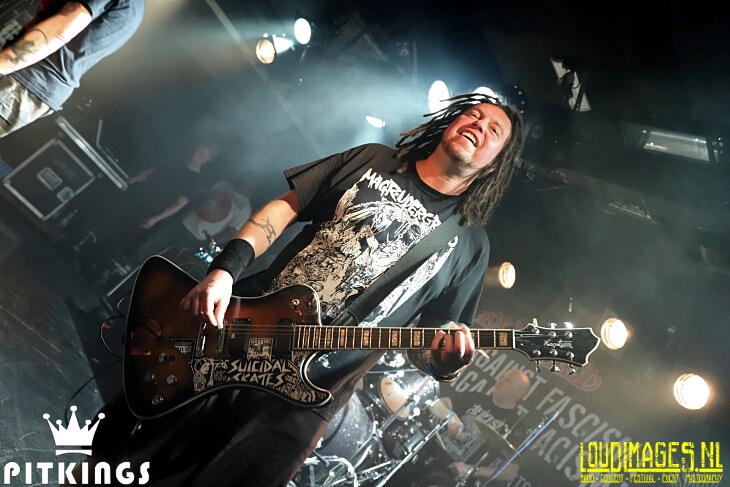 After surviving a heart attack in 2014 and overcome a depression that hit him in 2016, Wattie has come back to take care of some unfinished business! Vocally there’s hardly anything changed since the eighties of the last century. Neither has his way of life or his attitude. When someone chucks a glass of beer in his direction, he just smiles and gives the bloke the finger and continues. Wattie seems to be on fire tonight and spits out his lyrics with ferocious speed. He’s letting the crowd join him in the singing, which is done which much enthusiasm! They almost fight each other to blare a few words of the song into the mic. With or without mic, the Rotterdam crowd is singing along with every song from start ‘till end!

The band behind singer Wattie is a bit younger then he is and maybe that is the secret of the merciless power of The Exploited nowadays. These youngsters can keep up with Wattie’s relentless energy and in return they push Wattie to greater heights. In front of the stage there is mayhem; from the first song till the last. The monitors on the edge of the stage are pushed on the stage by the wild pit which is constantly going on. Even when a security guy is posted next to the monitors to keep them in place, it keeps very wild and chaotic. Just like a punk pit is supposed to be! 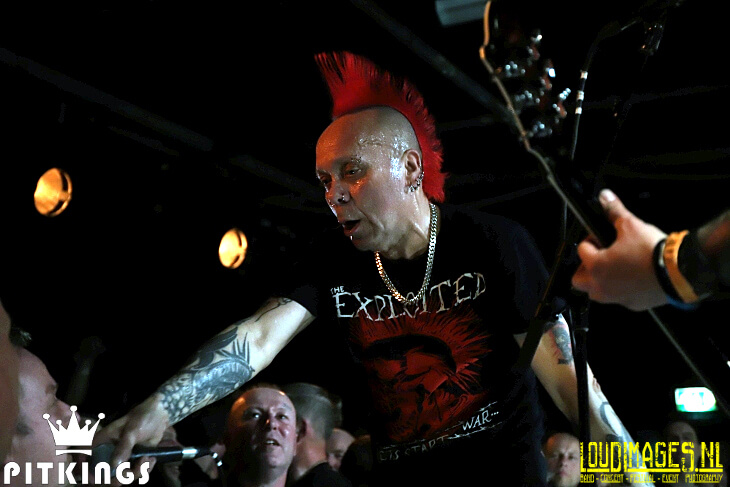 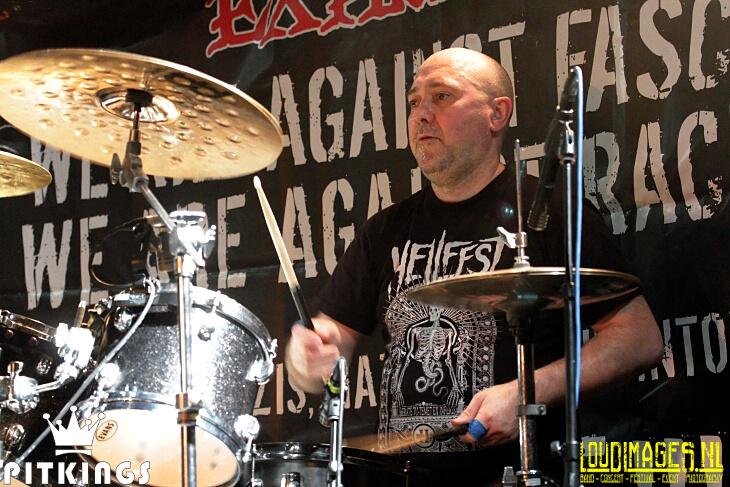 At about three quarter of the set, I decide to leave my spot on the edge of the stage to take some pictures from behind the pit. Luckily the pauses in between songs are quite lengthly, to give Wattie a breather and some water, because he is sweating profoundly. On one of these breaks I take my changes to make possible safe retreat with my gear to the back. Arriving at the back I find it impossible to move in any direction, but into the bar. The venue is extremely packed in the back and people cannot move to let me pass for a few shots even if they wanted.

I go into the bar, but taking pictures from there is not really an opportunity. So I morph into a regular attendant of this gig and look and listen to the show. In the corner of my eye I see someone lying on a chair and this person is a sleep(!) I remove an earplug and put it right back. I guess the sound pressure is still above 90dB here… How can anybody sleep! Even if you could… why should you? The Exploited is on the stage! 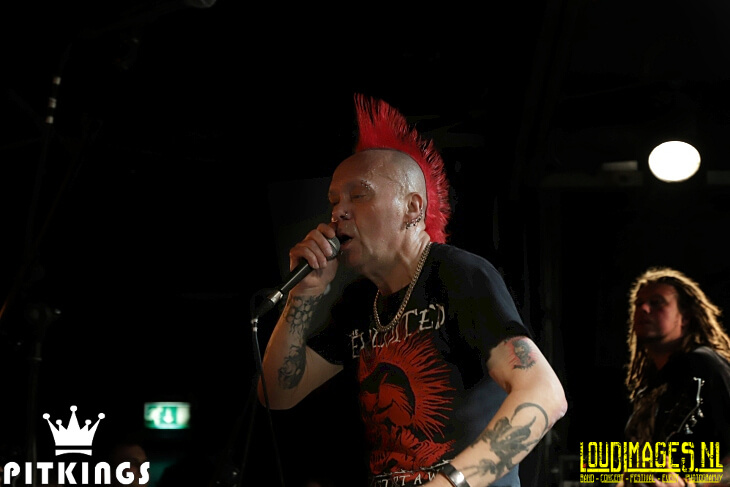 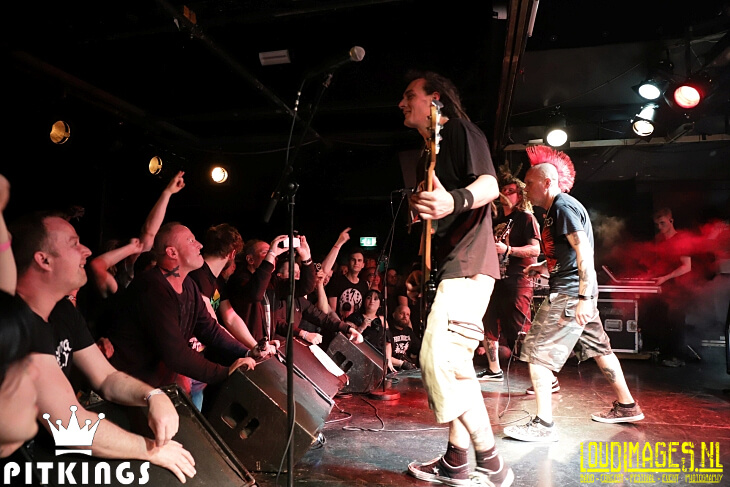 When the concert is nearing it’s end, I head out of the venue. There is no way I can get back in front of the stage to take pictures of the signature songs “Fuck the USA” and “Punk’s Not Dead” which is planned as the first and third encore. Pitty, but maybe next time! It has been a long day, but what a fucking great one it was!