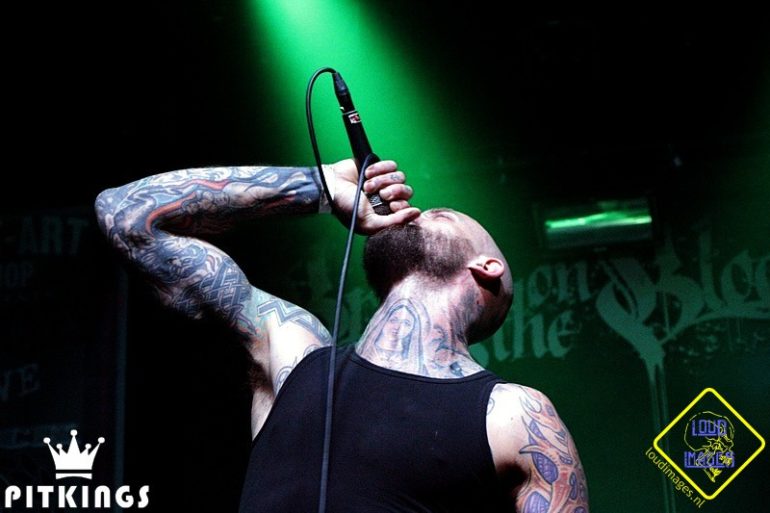 March 27, 2016 | Hedon Zwolle – TattooFest is a Cult-Art shop initiated festival which normally takes place in the city of Nijverdal. Since 2010 there is also a Cult-Art shop in the city of Zwolle and to celebrate their 5th anniversary, the festival went indoors in the Hedon venue. Izegrim announced to have their CD release party at this festival and The Lucifer Principle would close the festival. Besides those two Dutch bands, the following Dutch bands also performed: Rectum Raiders, Cheap Thrills, Tarragona, Obese, Diggeth, Variscythe, Martyr, Illusionless, The Heritance, Spartan, Bring On The Bloodshed and 3rd Machine. Hedon in Zwolle was the place to be on Easter Sunday!

Rectum Raiders
The band that kicked off TattooFest 2016 listens to the name of Rectum Raiders. According to their bio, they play “dirty gay-metal” and “uncompromising spandex-rock”. It’s clear this is not going to be the heaviest band of the day, but it the fun-factor should be high. Being programmed at the large stage is not in their favor. There is not to much audience and they are all standing in the back at the bar, waiting what’s going to happen… The show is quite homo-erotic and suggestive in a fun way. The English with German accent is funny too and when the dancing horse appears it’s outrageously funny. Musically it is decent and by bending some well know songs like Satisfaction (Ejaculation), Gasoline (Vaseline) and a extreme funny version of Rainbow In The Sky of DJ Paul Elstak, there are smiles everywhere. Cheap Thrills
This all female band is one explosive mix of rock, rock-a-billy and punkrock. With explicit lyrics, heavy make-up and suggestive gestures, there is not a male in the room without a big grin on his face! Not surprisingly there is a bit more people in front of the stage then at the set of Rectum Raiders. Which, by the way, come to see there tour-colleagues and dance provocative in front of the stage. Musically it all sounds pretty good, but the guitarist is something else: she plays fierce and with determination. This is a band to go and see, because it’s fun, good and good looking! Tarragona
I’ve seen this band on Stonehenge 2015, before the festival was canceled because of severe weather. Like at Stonehenge they play a decent set of melodic metal with clean and clear vocals. The gathering crowd were bobbing their head and that is always a good sign. The speed changes and breaks in the songs of Tarragona are in the right place and the solo’s are true masterpieces. A bit more stage presence would finish it off, but I guess it’s not easy to jump around, sing and play the guitar. Obese
Back at the small stage it’s time for Obese. This stoner rock band plays with a lot of energy and the audience is receptive for the music of this band. The raspy voice of the singer is mocked at for being from the south of the Netherlands, but since this is their fourth gig in a week it could be fatigue that made him more raspier. Even them being tired, the set is entertaining and well balanced. Diggeth
People with a ticket, but who are not in the venue yet and everybody with a ticket but not in front of the large stage, missed out a great band. Digggeth is, according to themselves, an explosive mixture of rock, metal and blues a.k.a. metal ‘n’ roll. To me it’s ff-ing close to oldskool hardrock. Heavy guitar and bass, very present drums and a voice with a story to tell. If this band plays anywhere near you, you really should check them out. There are no frills, but straight-up rock and the visitors present enjoyed the hell out of it. Lot’s of heads were banging and bobbing to this bands tunes. Variscythe
It’s kinda busy on the small stage when all five band members of Variscythe are on it with their gear. Although there is not much room left and it doesn’t withhold the band to move about. The music is fast & technical and is described as melodic thrash/death metal. This band is awesome! All songs have a nice melodic touch, but are all heavy and technical. The breaks are great and fit excellent in the songs. A special mention goes out for the drummer of this band. This guy is insane! Check his playthrough here and you’ll know what I am talking about. Martyr
These rockers know for quite a few years how to entertain a crowd and with a new album coming up in a few days, there is a no reason to only rely on previous work. The new songs seems to be louder, heavier and I dare to say it: better than ever before! Rop van Haren (vocals) easily wraps the crowd around his finger and encourages them to sing louder. Martyr is catchy as hell and the new album sounds like a perfect addition to every metalheads collection. Illusionless
Recently I listened to the latest album of Illusionless and I must admit I was positively surprised. At Occultfest 2015 they were quite good, but the voice of Melle Brouwer was (to) heavily distorted that it sounded like gargling to me. So this time I was curious if a live set would do justice to this album. Boy it did! Vocally it was superb and musically it was just great. There is a nice variation in the set and the new tracks sound really well. The fact that Melle is understandable really makes a big difference. I really enjoyed the set of Illusionless! The Heritance
This band puts on a high speed heavy metal show, from the first note ‘till the last one. The songs are varied and very well performed. This is the kind of band you would like to see when you go to a concert. There’s lots of action on the stage and the pace is high, but it sounds as tight as it can be. The whole gig of The Heritance is a display of how well a band can play together; it sounds fucking-a! Spartan
Back in front of the small stage, Spartan is next up. Even though they had to bring a substitute guitar player, the performance is great. The music style fits the name quite well; sturdy, loud and fast. Spartan plays a combination of power and death metal, but the trained ear can hear some metalcore-ish riffs too. The small stage is really a tad to small for bands consisting of more than 4 persons, but that only hinders their stage presence a bit. All in all a great combination and Spartan is a band to keep an eye on! Izegrim
This festival is the CD presentation of Izegrim. Their recently released album, “The Ferryman’s End” is well received by the press and is a horrifying story of a killer who eventually even kills the man who brings the deceased to the hereafter. The new songs sound great live, with “White Walls” as honorable mention. Marloes (vocals) almost bursts into laughter when a few friends appear in front of her in orange (inmate) overalls. The atmosphere on the stage is cheerful and the guests of Izegrim having a party at the merch stand. The set consists of some older songs too and of course these well known songs are played to perfection. The crowd is enjoying the hell out of it, shown by the amount of hair flying around. Izegrim draws the biggest audience of the day and they are getting treated with a superb performance. Bring On The Bloodshed
This band is labeled as metalcore and has a tall, heavily tattooed singer which can’t be overlooked, especially at the small stage of Hedon. Bring On The Bloodshed knows how to keep their audience interested, by alternating fast and ultra slow parts. At some moments it is almost as if the energy is depleted, but is regained within seconds. All songs feel ultra heavy and intense and that is hitting home. Great riffs and breaks makes it complete. 3rd Machine
A lot of the crowd is already gone when 3rd Machine start with their set. This has nothing to do with this band, because they are simply good. Their not the heaviest band on the bill, but it’s melodic and is rocking! On the 9th of April 3rd Machine releases their new album on which there is a duet with Frank Schiphorst of MaYan. Frank is on tour in Singapore, so Jeff, vocalist of Spartan is filling in for Frank and does a great job. What strikes is, that the audience is very enthusiastic. Well deserved by the way. The Lucifer Principle
It’s been a while since I’ve seen The Lucifer Principle. It was in 2012 to be precise when they supported Sepultura in the Gigant venue in Apeldoorn. As a closing act of a festival nowadays it’s not always guaranteed to have the largest audience, but frontman Earik (vocals) is nonetheless enthusiastic and cheerful. On more then one occasion he takes a walk through the venue while singing. Earik even got Marloes (Izegrim) to lead in a “polonaise”! But back to business…
With a new album out or coming up, a gig is always interesting to go to and this time it’s certainly worthwhile. The Lucifer Principle is on a roll and giving a great show. The sound quality is great too and the people left are having a blast! Afterwards Earik tells me it’s not about the number of spectators, but all about the energ: and there was loads of it! Catch a gig of The Lucifer Principle if you can and you won’t be disappointed!