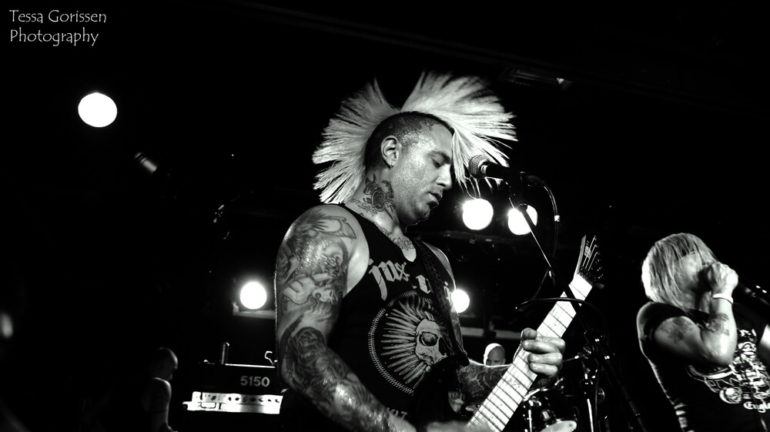 July 31, 2016 | Baroeg, Rotterdam – The venue for heavy music Baroeg celebrates his 35th anniversary this year! Therefor they organize some festivals and concerts along the year. On the 31th of July it was time for punkers to mosh around in Baroeg, where the sold out festival ‘Tales Of The Punx’ took place. Broekhoest, Kort Door De Bocht, Funeral Dress, Blok 1A, Total Chaos, The Restarts and The Casualties entered the stage this afternoon and evening. We missed the first two gigs, but there was enough left to enjoy!

Blok 1A (NL)
By entering the Baroeg, Blok 1A was about to begin. A lot of people gathered in the hall to see this Dutch band play. Blok 1A was founded in 2002 and stopped in 2008. After a break of 6 years, they started all over in 2014. But today they play their last set ever, so it had to be a great party. In the beginning the crowd is very devious, but after a few songs they start moshing. Singer Iwan smiles while seeing this scene, and you can see that he reloads energy from it. A fast and energetic show is all there’s left to keep the memories alive. Too bad this band stops after so many years. And the visitors proved one last honor to this formation. Total Chaos (USA)
After a small break it’s time for Total Chaos to enter the stage. Those american boys know how to throw a party and start moshpits. There’s no chance for everyone in the venue to stand still. You have to jump, mosh and dance to survive it. It’s pretty clear that those guys are real punkers. Rob Chaos sings about being against the politics, how politics attend war and about society. They mix punkrock with hardcore, something that commend itself to the Dutch the people. And as the name says: every show of this band is a total chaos. Nice opening of the early evening. Funeral Dress (BE)
Funeral Dress is next to perform. The Belgian punkers are dedicated to their music. They exude, but are also very concentrated. Seeing the shirts in the hall, a lot of people came to see them play. From the very first notes a large moshpit starts, some even climb up the stage to crowdsurf. The musicians have a good interaction with the crowd, talk after almost every song and make jokes. The sing-a-long punksongs are catchy, their musical abilities amazing. And everyone in the venue becomes crazy. If you missed this song, you should definitely check them out somewhere else. The Restarts (UK)
One of the last bands of the evening is The Restarts. They come from London and claim to be punkers first, musicians later. Society is more important than making music for the market. You can see that by the way Kieran and Robin sing and play their instruments and the hardness of Jeremy’s drums. Conspicuous is that guitar player Robin is talking Dutch to the visitors. Followed by a lot of surprised faces and screaming. The public goes insane. A lot of people climb the stage, crowdsurfers are everywhere and the floor is filled with spilled beer. The prove of a great show, where strangers became friends in the moshpit. The Casualties (USA)
Last but not least is the band everyone was waiting for. The Casualties are about to end a day with a lot of great punkbands. It’s rare that this band plays in Holland, so a lot of fans bought their ticket a long time ago. When you’re small and can’t handle a heavy moshpit, you’re at the wrong place tonight. Even the security is having a hard time trying to keep the fans away from the band. From that moment on some even climb in the ceiling or fall against the monitors. Strange to see that a band results that much impact in people. And the show? It’s amazing. A lot of energy, jumping the whole time and playing with the crowd. We made new memories, saw some old bands and with a lot of bruises we’re heading back home. Punks not dead!