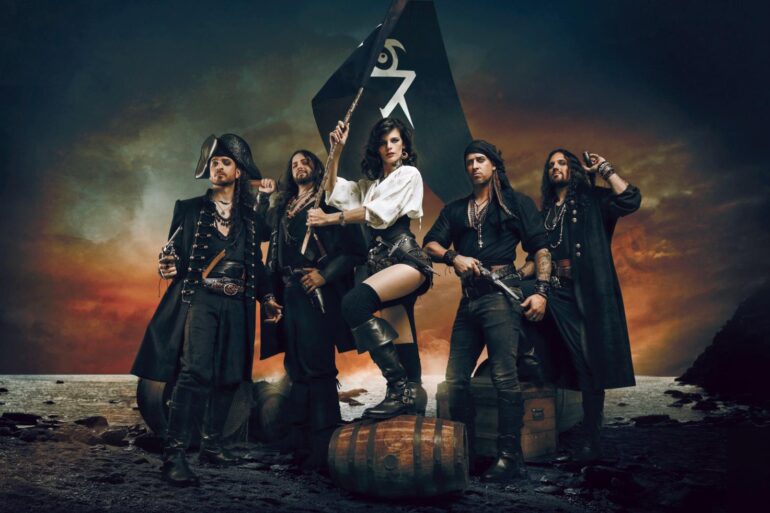 Untamed as the seven seas, VISIONS OF ATLANTIS are set to release their anticipated and most honest studio album to date, Pirates, this Friday, May 13, via Napalm Records! Today, the band has released the majestic and energetic third single “Master The Hurricane” together with a stunning official video showing the international band in top shape once again!

The new single, “Master The Hurricane”, makes every symphonic metal enthusiast’s heart pound faster by managing to combine what makes VISIONS OF ATLANTIS so strong in 2022 in more than seven minutes of runtime. Singers Clémentine Delauney and Michele Guaitoli show the full range of their skills from soft and calm tones, over staccato sung parts and rough tones to a bombastic chorus that makes the listener dive deep into the new world of the band. The well elaborated and beautifully pointed guitar and drum lines make this song another hymn in the strong discography of VISIONS OF ATLANTIS. The overall drums impress with a natural sound, while FEUERSCHWANZ‘s Ben Metzner adds a special touch to the song with his flute playing.

The album pulls the anchor with the epic opener “Pirates Will Return“, which instantly enchants with its hymnlike chorus and showcases the high-class versatility from the very first second. In the blink of an eye, VISIONS OF ATLANTIS manage to create their very own incomparable universe of symphonic epicness, intense riffing and, above all, the impressive vocal symbiosis of Clémentine Delauney and Michele Guaitoli. Delauney’s bewitching offerings oscillate between clear vocals, powerful belting and operatic techniques, whereas matchless counterpart Guaitoli adds spice with top-notch power metal infusions. Pirates presses ahead with catchy hook lines, like in mighty “Melancholy Angel“, rousing “Clocks“, charging “Wild Elysium” and majestic “Master The Hurricane” – the latter with a perfectly balanced mixture of dramatic choirs, heavy orchestration and dedicated vocals. Pirates reaches the harbor for now with mesmerizing “I Will Be Gone“, building up a dramatic wall of sound accented by harmonizing flutes and bagpipes, delivered by no less than FEUERSCHWANZ virtuoso Ben Metzner, who joins also on “In My World“, “Master The Hurricane” and “Heal The Scars“.