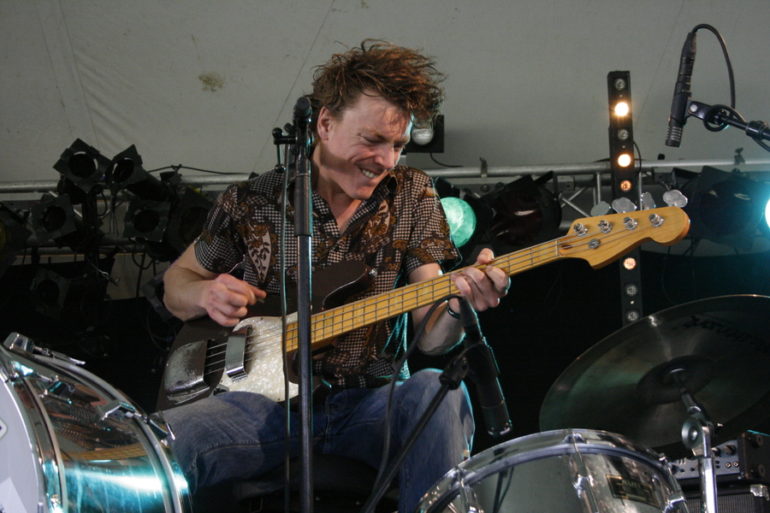 June 6, 2015 | Railway Station, Dalfsen – This year the fifth annual edition of the Stone Rock Festival was held. Stone Rock is a festival with a dirty rock ‘n roll setting. With bikes, BBQ-meals, beer and a lot of pyro. This year was a fully Dutch line-up with bands like: Navarone, De Staat, Magnetic Spacemen, An Evening With Knives and many more. I was there to witness the festival and see some cool bands.

Magnetic Spacemen
It was a beautiful sunny day and when we came of the train the festival was literally right next to the train station which is ideal for using public transportation. We walked on the festival terrain and the band Magnetic Spacemen was about to begin at The Handlebar-tent. These boys from a small town called Tuk, are an up- and coming punk rock three-man formation. They supported John Coffey on their latest club-tour. The band contains a lot of energy and put a lot of effort in setting a spectacular show, once they began some people came out of the sun and go watch in the tent to see what was happening. Magnetic Spacemen played some interesting songs like ‘Thoughts of The Week’ and ‘Baby Doll’ and even a brand new one.

Poor John
The next band in The Handlebar was 60s, 70s rock n roll band Poor John, These two brother decided they could start a band with just the two of them. They already played previous editions of Stone Rock and became a regular in the line-up. They built most of their instruments their self. One plays guitar, harmonica and vocals and the other does drums, bass and also vocals. This band is great and one of a kind. Something truly amazing to witness. They even did an awesome cover of ‘Ghost Riders in The Sky’ from Johnny Cash.

An Evening With Knives
After some mediocre stoner-rock from ‘General Midnight & The Apologist’. The post-metal / stonerdoom band An Evening With Knives from Eindhoven took it up a notch. A show full of dark, heavy riffage and head-nodding grooves. I hope we’ll be hearing more of this band soon.

De Raggende Manne / Het Universumpje
In the start of the evening it was time for De Raggende Manne. This punk rock band has been around for a while. The band started in ’88 and have written songs like ‘Zand’, ‘Grote Bek’ and there most well-known song ‘Poep in Je Hoofd’. As you probably already guessed this band sings in Dutch. Though the sound wasn’t that great, everybody lost their mind at ‘Poep in je Hoofd’. After De Raggende Manne, they continued to sing in Dutch with ‘Het Universumpje’: a weird stoner-rock band. The front man comes on stage with a suit, with black and red with bats on it. The band has some funny titles like ‘Groene Bananen’ where he sings that he ain’t gonna buy green banana’s anymore.

Navarone
As it was getting darker outside, grunge/hard-rock formation Navarone was set to play the Mainstage. The show started off with an intro and some beautiful lights. The band took the stage and started off with ‘Highland Bull’ from their first album ‘A Darker Shade of White. Singer Merijn Van Haren has a jaw-dropping voice accompanied by a superb band. Harder songs like ‘The Red Queens Effect’ and ‘Smash and Grab it’ come together with flames and an overjoyed crowd, many applauds and cheers were received. Softer songs like ‘Leave’ and ‘Indigo Blue’ from their latest album ‘Vim and Vigor’ gave a let the crowd listen attentively. The last two songs the band played ‘Wander’ an amazing sing-a-long song with a catchy lyric, we’re you just cant keep shut and ‘Sage’ a spectacular 10 minute during piece of art that’s brings the show to an amazing end, where you keep thinking this show is way too short, you just wanna keep on seeing more.

De Staat
De Staat, an alternative rock band from Nijmegen, were headlining the festival. The band had some interesting performances over the years, they played Pinkpop, Hungarian Sziget festival and even the British Glastonbury festival. With extraordinary instruments the band creates styles that you probably never heard. Songs like ‘All is Dull’ and ‘Old Macdonald Had No Farm No More’ are an perfect example. The band made everybody dance. Over the time, De Staat has made a total of 3 albums and an arsenal of fun songs. Songs from their latest album I_CON like ‘Down Town’ and ‘Make Way to The Passenger’ we’re performed fine as well as their older works from Wait For Evolution and Machinery. It was a shame, but halfway through the show we need to get on the bus back home. The trains didn’t go anymore, because there were technical problems once again.

It was a beautiful day with nice weather and some awesome bands, I hope I can say until next year Stone Rock Festival!