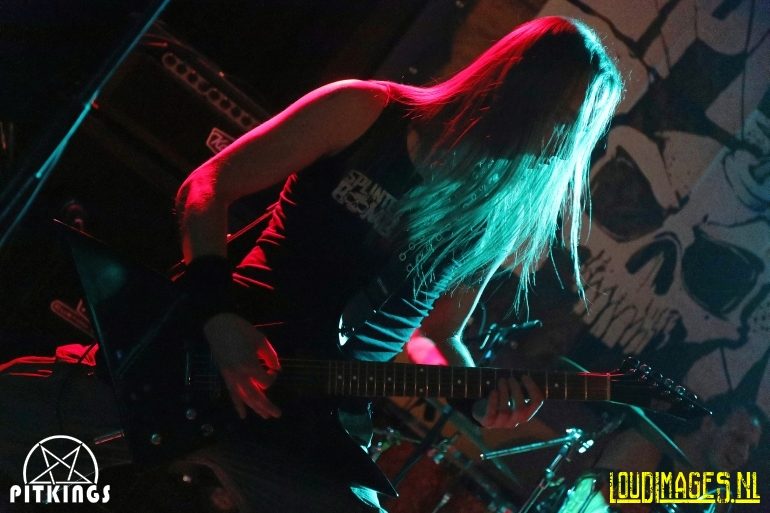 March 30, 2019 | World Skate Center, Den Bosch – last week I reviewed the EP of Splinterbomb and the next saturday the release party is in World Skate Center in the outskirts of Den Bosch. I arrive early, so I have the opportunity to check the place out and I guess for a skate fanatic this place is awesome. Pity there is hardly anyone in the skatepark, because a few killer shots of spectacular skaters in action would have been a great bonus.

The bar area with the stage is decent in size and is filling to about a quarter when the first band is getting ready to kick this evening in gear.

To be honest, the EP-release is more like an indoor festival with four bands. Guitarist Hein Willekens explains afterwards, that the invitation of the bands is more like a collaboration. By inviting bands to play on this gig, his band gets invited to gigs these bands organize.
In this way, they ensure each other to play gigs in different locations. Smart thinking and in interesting concept!

But back to the gig…
At eight o’clock The first band climbs the small stage of World Skate Center and the guitars are plugged in.

Hierrr Pak Aan (NL)
First band of the evening is a Dutch punkrock band with socially critical lyrics, but they are is quite melodic for punk. The time the band members were angry young men, has been gone quite some time but that doesn’t effect their enthusiasm and drive to change the world by pointing out wrongdoings.

Musically it is not the most complex sound of the evening, but that is no problem at all. The energy and fun of the band is picked up by the crowd and some movement is seen, even though the gap between the stage and the people present is “typical Dutch”, of course.

This in-your-face style punkrock gathers a decent crowd and it sounds pretty solid. It is unfortunate that at a few times during their gig the lyrics were not very well intelligible.

Intero (NL)
Next up is Intero and due to some audio issues, there is some delay.
I have a bit of a hard time to put a genre on this band and a peek on their Facebook the next day tells me that they’re into metal, hardcore, death metal, groove metal and thrash metal. It is an interesting mix of styles they lay down on the stage this night, which fits that collection genres pretty well.

There are a few songs which have an interesting kind of break during which the pace is not going down, but up. Slow bass and guitar and a pulsating double kick with a fitting vocalist.

The hardcore fans of this band were in front of the stage and were represented by two elderly ladies who took pictures while hip rocking on the feisty beat. Awesome!

Hell City (B)
The delay is in the mean time a half an hour when Hell City finally start their set.
Michelle Nivelle is fronting this band is supported on vocals by Tommy Goffin who is singing/grunting from behind his drums. This causes a small problem in my opinion, when they sing with/to each other. Michelle has to turn her back to the audience or turn her back to Tommy to whom she is singing.

That is something what itches me a bit with this band. The band is starting a number of songs with their back to the crowd and the focus is a bit too much on each other and a bit too less with the crowd to my taste. That being said, the sound is slick and well taken care off. The solo’s are tight and nicely spun out.
The set is cut short, to let the headliner of this evening get their due time.

Splinterbomb (NL)
After a very swift changeover the band of the evening takes their places when the intro sounds.
A bomb-shaped alarm clock goes off and Splinterbomb starts their set with two songs form their previous EP “Capital S”.

With the announcement of “Nuclear Warfare”, the first track of the EP, the cheers are loud and Splinterbomb plays their EP in order from start to end.

Guitarist Hein told me upfront, that they had a proper ending of to finalize “The Tears, The Struggle, The End” and they did! A real ending is much better and therefor I award them with a half point extra for this change!
When the EP is played in its entirety, Splinterbomb treats us to a cover of Rammstein’s Feuer Frei and the venue goes berserk!
Of course “Confess”, the 2018 single is played too and with the remaining two other songs of the previous EP “Capital S”, all of Splinterbomb’s own material is played this evening.

At this point Splinterbomb balloons are handed out and in no time there are countless balloons blown up and flying through the venue, while Splinterbomb plays their last song of the evening; ”Refuse, Resist” by Sepultura.
It is getting messy in a fun way and a great ending to a perfect EP release party!